A Woman’s Right To Say No, Just No

May 1, 2014 Bad reaction to No, Badly behaved men, Chauvinism, Lashing out in disappointment, Men who treat women badly, Mollycoddling men, No does not mean yes, No explanation required, No means no, Over explaining, Saying No, Sexism, Woman means no 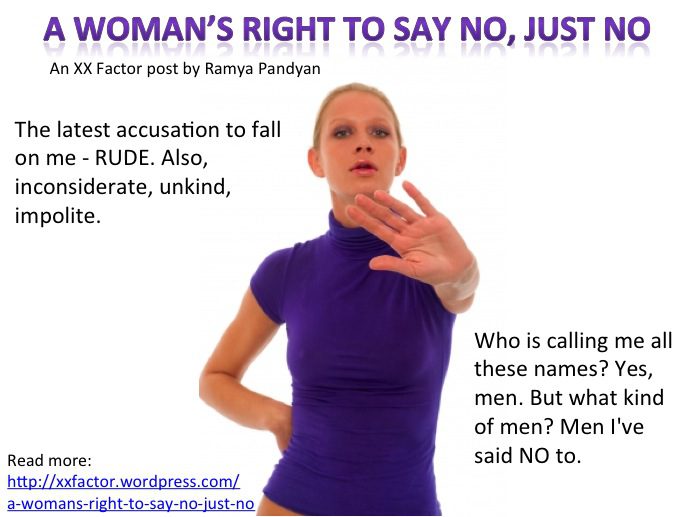 *Image (without text) via Ambro on FreeDigitalPhotos.net

Here’s the latest accusation that falls on me – RUDE. Also, inconsiderate, unkind, impolite. Hang on, who is calling me all these names? Yes, men. But what kind of men? Men I’ve said NO to.

These are NO to sexual advances. NO to implied interest. NO to having to listen to them at 5 a.m. NO to pandering to their delusions. NO to lying about what I think of them (“Tell me honestly!”). NO to letting them get away with sexist remarks. NO to whining about how men have it worse off than women (“Women getting beaten? So what, I’ve also been beaten.”).

It takes everything I have to not throw something at these people. It takes every minute of my good breeding to not rip open their fallacies. It takes every ounce of meditation/yoga/self-help/improvement/healing activities I’ve ever done to not yell at them. I reign it all in and say, “No.”

What are some of the consequences? Let’s look at the past month.

Man 1 whined for 4 solid hours about acquaintances who according to him, were ‘saying things’ about him and a girl he liked who was cosying up to someone else. He bitched about her, moralised about PDA, listed out what his sister, best friend, mentor, former boss all had to say. And he asked me what I thought. 5 a.m. and I told him to just stop worrying about what everyone else said and live his own life. The next morning I was hit by a barrage of angry messages, ranging from “I thought you would be kind to me.” to “You used me.” It went on for 90 minutes, I kid you not. I was in a meeting, so I couldn’t pick up the phone and tell him to shut it. Instead, my phone and my peace of mind was sullied by a 31 year old man who got angry that I said NO, I don’t want to listen to you.

Man 2 had been making all manner of sexist comments couched in polite, benign language for months, things I opposed but in a friendly manner. He attacked me for weeks over ‘how hostile I was to men’ in my writing. His comments were directed to my fiction pieces where a man was a villain or a victim or a bystander (Here are the stories he objected to, on the grounds that they were hostile to men: L, N, R, W). He also took objection to the fact that my writing was ‘bitter’ (specifically this piece, where I talk about a city, not a man). He informed me that women were considerate. Then he declared that I wasn’t actually a woman. And he ended with saying that that everybody else around also thought so and didn’t like being around me. An over 50 year old man who got upset because I said NO, I don’t agree with you.

Man 3 badgered me for friendship or a conversation. I told him thank you, but no thank you. Why, what is so bad about me, he wanted to know. I’m not interested, I said. Idiot, he called me. An indeterminately aged stranger who abused me because I said NO, I’m not interested.

Man 4 is a stranger I had to contend with, in the swimming pool today. I’ve been swimming for over 20 years and have a mean rhythm of my own. I don’t talk to anybody, I’m not a part of any class and I don’t go with friends. I practice alone and at the time, was hanging by the edge of the pool, catching my breath. He splashed over in my direction clumsily (a beginner) and stopped mid-splash thrice and stared openly in my direction. I swum away as fast as I could. At the deep end, when I was practising my dives, he swum over and grinned. I ignored him and continued to jump off the board and swim back to the ladder to try again. Then he tried speaking to me. It was something along the lines of “You didn’t do that dive properly, no?” I didn’t reply, just turned away and continued. Someone else I recounted this to, said I should have just said “I know you want to talk to me and I appreciate it. But I don’t want to talk to you.” I want to ask why? What gives a stranger the right to think it’s okay to approach a lone woman and interrupt her in what is obviously a solo activity? And why am I supposed to be polite to him? Also, I believe response (any sort) is actually likely to encourage a man like this. What is this Hassi toh phassi attitude? Even smiling to soften the NO is likely to be taken as something else. So, why should I?

I have a lot of men in my life, a father, several good friends. It bothers me that I have to explain that I am a normal, functioning person with healthy relationships but I do. I get people telling me that I should learn to be ‘diplomatic’. Women tell me, men don’t like hearing no, you have to be careful when you say it to them. I have men saying women should be nicer because ‘Hey, I am a nice guy, I’m not like that’.

I’ve been taken in by the maths of it myself. Obviously not every man is likely to behave like that. But most of them (in my experience) do. Besides, what obligation do I have, other than a firm NO? Why am I supposed to dress it up in consideration and politeness and sweetness and diplomacy? If I’m saying NO, I have decided that I do not want to spend any more time or energy on that situation or person. Why am I having to spend it anyway or be treated like a deviant when I don’t? What is my obligation to assess whether the man in front of me is (as the pattern proves) unable to handle a no, or a adult human being? That problem is his, not mine.

Perhaps I am making a mistake in saying NO to a person. But that is my choice and right to make. I don’t understand this blaming of the ‘few bad men’ for a woman’s saying NO. Every man is a great guy in his own eyes. That’s got nothing to do with my right to say No to him. I am not required to offer him a nicer NO than I offer other people.

I demand my right to say NO. Without explanation. Without sweetness and cupcakes. No means NO. Just NO.

5 thoughts on “A Woman’s Right To Say No, Just No”