A Pizza Slice Of Kindness 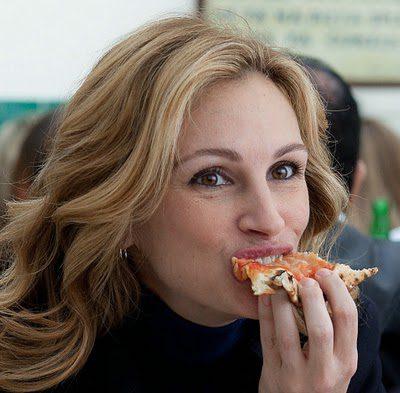 I was watching ‘Eat, Pray, Love’. I know it’s the kind of story that a lot of us sophisticated types turn up our noses at and say “First World problems”. It’s also a story that made me hungry. How wonderful that the first raw mangoes of summer are here and I had one to accompany my sambar rice!

What struck me is the absolute absence of kindness, the hardness of our reactions. How can any one of us possibly measure what pain means to another? Who can truly determine which problems are bigger than others?

A successful white woman in an unhappy marriage versus an orphaned brown child in a war-ravaged country. Yes, I know it seems like there’s an obvious answer to whose problems are worse. Is there? Testicular cancer versus breast cancer. Arthritis versus colic pain. Diabetes versus malnourishment. An abusive partner versus a beloved partner who dies young. Our own problems are always the biggest to us.

I am learning a lesson of empathy.

If I were the chief minister of a state, I might have to make a decision between using my limited funds to either build better transportation in the cities or send relief to drought-striken villages. I can imagine I would have to weigh one problem against another and decide which one merited more time and money. But empathy is not a finite resource. It grows the more you practise it.

I know the real reason we don’t want to be kind. It’s not because we have so little of it to give. It’s because being kind means giving up the chance to blame the other person and play victim.

I thought about my ex. There is so much pain in this memory. But then, there is also sweetness when I let myself acknowledge that. Our relationship began with kindness. At some point of time, we forgot that and we became people who competed with each other. Kindness was lost in our mutual me-firsts and love went down the drain. We haven’t changed. All the things about him that touched me are still true. It is also true that he was cruel and cold and it was unfair. These two ways of making me feel, can exist together in the same person and the same world. Acknowledging this, is my act of being empathetic to myself. How often do we do this for ourselves? I know we don’t. We scream our hurt and we disguise our love. Or the other way round. But we rarely acknowledge and honour either one. Well, I’m doing that now.

I won’t take the self-help angle of give empathy in order to receive empathy. Karma is not a business transaction. This is about how lightly you tread, how smoothly you move through life. I know a lot of people will not be kind back. Many laugh. And a lot of people in the kind of hardbitten, cynical city life I live, may even try to hurt me.

But I think I’ve stumbled onto something here. I’ve survived deaths of family, friends and colleagues. I’ve survived abuse and rape. I’ve survived politicking and three recessions. These are not experiences I treasure so why would I want to put them up on a pedestal and determine my life by them? There is a lightness in not knowing, not remembering, not worrying. And I would rather look forward to a life that’s a feast, a carnival, a haven, not one that’s a battlefield. Empathy makes all of the first possible, cynicism makes the last.

Exactly a month ago I wrote about the desperation of feeling nothing. I was sinking into the quicksand of what my life was then. A month before that I sliced my deepest emotions with a scalpel of resignation. This past month, I’ve cried a lot, broken out in acne, fallen sick five of these weeks and had a baffling period. I have lost two close friendships. A goodbye I’ve been ignoring and dreading is here. I have also met someone I like. I’ve been taking a lot of walks. I’ve been to the sea more often than I have in two years. And look at how much I’ve written in this time. Something is shifting, something is giving. Something definitely is happening.

And from what I thought was ennui, something new is coming. Maybe tomorrow I will have pizza.

4 thoughts on “A Pizza Slice Of Kindness”