Why Digital Dating Means Nothing New For Indian Women 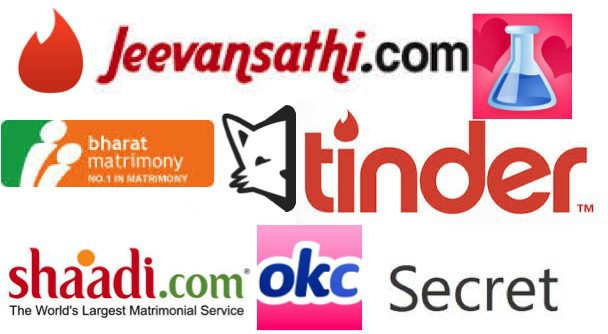 Tinder. OkCupid. Secret. Anonyfish. Even Couchsurfing. India is on the digital map and we of the brown-skinned, spicy-food-eating ilk are exploring digital dating too. Here’s what I found though.

On one end of the spectrum, we find the matrimonial sites. They were the original Indian dating sites, pre-dating the recent apps by a good ten years at least. What, you don’t count those? Matrimonial sites are parentally-sanctioned ways to meet members of the opposite sex, with a view to forming a sexual/romantic relationship with them. Aside from the parental sanction, how do these differ from the average dating service?

At the other end of the spectrum are these dating services that have everyone commenting on the new India. Here is what is actually happening. There aren’t that many women on them, which won’t surprise anybody. There are fewer women in the country and less of us are connected/digitally savvy. Most women don’t enjoy the kind of independence/freedom that dating requires. Women are also less open to these services. I found they have good reason to be.

Tinder, the hot app of the season, picks up from your Facebook profile and lets you see who you have in common with the other person. You can’t imagine the number of married men I found there. A male friend tells me he is equally astounded by the number of married women he finds too (wedding photos as profile pictures!). I can’t tell whether it’s dumbness (“Maybe they thought it’s a chat service,” he thinks) or sheer arrogance (“People will hit on me anyway.”) that makes married people sign up for a dating service. Not all of them are that easy to catch though. I imagine knowing how to navigate the net and mine information from the social media is a skill that helps. At least four conversations proceeded with interesting men before a stalking session revealed their marital status – a Facebook picture tagged here, a forgotten social network profile with their status as married, a photograph carrying a baby followed by comments like ‘Congratulations on becoming a father!’. Really, why are these people here?

We come up against a different issue on OkCupid. This service has been around for ages and it shows, in the dated design and early millennial interface, even on the app. You’re required to fill in an entire profile and there are no privacy settings, no filters on who gets to approach you. The minute I began the lengthy sign up process, my inbox was flooded with messages. This before I had written a single word or even uploaded a photograph. All these people had to go by, was the fact that I was female. I decided to brave it and weed through the crowds for an interesting connection. It has proved to be an arduous exercise. Indian men do not like hearing no. They believe persistence to the point of stalking, is a virtue. Rape culture is alive and well as long as the Indian man exists. Yes, I said that. I was stalked from different profiles (same photograph) and abused for saying no or even for not responding.

Now let’s come to Secret, the uber-hot-hot app that only us digital hipsters have caught on to. Secret lets you post messages anonymously. You can see secrets posted by Friends (anyone on your contacts lists – phone and email) and Friends of Friends but no one can tell who has posted what. I actually uninstalled it in three days because I couldn’t bear how depressed it made me feel. The conversations and a lot of threads about known women. The secrets were usually about one person ‘having the hots for’ or ‘being really turned on by’ such a woman, while the comments would include various versions of catcall responses such as tearing the woman down (“Are you crazy? Total thunder thighs, man. Everyone gets to see them.”) or lascivious jeers of agreement.

I signed into Secret again two weeks later and I find there is a little more variety. Now people also confess to cheating and being proud of it. Comments calling them out result in abuses and versions of ‘You must be such an ugly bitch, nobody wants to fuck you’. There’s also an occasional secret that may be posted by a woman. All of these, plus comments get others begging for a contact with them. This, even to comments that are outright nasty towards men. I know Indian men in large numbers may be like this, but it’s disheartening to see so many people that I know, behave this way too.

Now, let’s step back from the obvious problems. There must be some worthwhile men, right? Right. There are men who are articulate, intelligent and educated. They quote pop culture, read good literature and work for respectable MNCs. These are the same men who refer to the dating apps as pick-up services. One of them asked me what kind of a woman clicked on such apps. Another told me he respected me because I said no to his booty call (after one conversation). Welcome to the modern Indian man. He believes that women’s liberation means booty calls and dutch dates with women who wear short dresses.

Now, for the hookup culture, that scary thing that’s got everyone above the average digital citizen age in a flutter. Where does that fit into India? I’ll tell you. It’s married people using the fact that they were forced to marry, as an excuse to explain cheating. It’s people who are too ‘respectable’ to buy sex, seeing an easy unpaid option. It’s ‘modern men’ who treat the woman in a hookup as a hooker who won’t charge them. I thought hookups were just about having sex with a person you barely knew and both parties not thinking too much about it later. When did gender-biased judgment and bad behavior come into it?

All in all, I don’t think there is anything wrong with the dating/mating services. The trouble is the people and the attitudes that populate these services. Dating in India is only highlighting the fallacies in the Indian culture. As an Indian woman, my options are to be packaged like a doll, on a matrimonial service or objectified and discarded on a dating service. We haven’t changed in decades. The only difference is it’s all digital now. No wonder women don’t seem that interested.