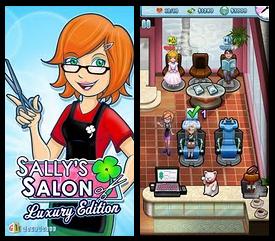 It’s a curious fact that all games mirror real world situations. For some reason, we enjoy playing a game, while its real world counterpart would probably have us bored or scrambling for excuses. Perhaps it has to do with the illusory sense of control & achievement that a game gives us, which its real-world counterpart may not.

I’m hopeless at time management in real life. Deadlines are met but with frantic dashing about & panicking. I get delayed, no matter how hard I try to make it on time. And my meetings & conversations stretch on long beyond what was intended. It’s curious indeed, that I love that genre of casual gaming called Time Management.

The Dash games are probably the most popular of the Time Management games. They involve performing a set of actions, at optimal speed & order in order to collect the rewards & progress to higher levels. I think Flo’s Diner and Sally’s Spa are the biggest of these and have spawned several knock-offs like Wedding Dash, Pet Dash etc. I’ve enjoyed the online versions of both these games before and it was just a matter of time (!) before I hooked up Marvin onto that ticking clock. Here are what I’ve been playing against the clock for:

This follows the standard Sally story, starting with her taking on a small beauty salon. The game

begins with basic services like hair wash, hair cut, hair colour & blow dry. You pick the best choice of hair cut & hair colour based on the customers’ expression & get rewarded with hearts (and subsequently tips) accordingly. There are a couple of different customer types by patience level & tipping abilities. During the game, you are also offered options to upgrade services or buy new materials (like magazines, chairs, speed apron & coffee dispenser). Sadly though, in the initial levels, there really isn’t potential to earn enough to make any purchases outside a magazine and a coffee machine. Also, the free game ends at level 5, which means you also don’t have a chance to experience the spa extensions in other locations, the hiring of new staff or the merchandise counter, all of which add tremendously to the original game.

The graphics are colourful & quirky, matching the original game perfectly. Even on the tiny mobilephone screen, the details of hair styles, facial expressions & different customer types comes through perfectly. The game screen is a little bigger than the mobilephone window, which means scrolling left-right is necessary. Even so, the services are concentrated to the left of the screen and the payment counter is right in the middle. So if you’re really quick & don’t let the waiting line pile up (top left), then you manage nicely without ever having to scroll.

Dinner Rush 2011 Lite: Customers On A Conveyer Belt Is Unpalatable!

This is a version of Flo’s Diner but doesn’t have the same charm. The key to both Flo’s Diner& Sally’s Spa is their key characters that are constants through all levels. Players superimpose their own identity on Flo or Sally & can empathize with her rushing about to fulfil orders or service customers. Dinner Rush focuses on the dishes rather than on the customers or the staff. Each customer glides in as a face at the top of the screen. They are seated & their orders taken by drag-drops. Once the order has been registered, a tiny menu made of colour blocks appears on the right side of the screen. The game is about clicking through in the correct order so as to complete that dish. Customers as a conveyer belt item to be processed isn’t a concept that I enjoyed. Much of the retail experience is the actual engagement between the service provider and the customers. All of that goes missing in Dinner Dash. The graphics of the food components are too tiny and too basic to grab interest via the cookery route. This is not a game that I’d recommend for Dash lovers. Electronic music is a staple of these games but possibly because this game was so boring, its music seem to grate on my nerves even more.

Dinner Dash 2011 Lite is developed by Nalbam Soft and available for free download in the Android Market.

Buffet Dash Lite: Waiter, There’s A Bug In My Game!

This is another spin-off from Flo’s Diner. Sadly, like Dinner Rush, this one also fails to deliver a

good experience. It started when the music wouldn’t stop even after the application was exited. Turning the music off while the game was in progress didn’t help either. And finally, even Force Close/ Clear Data didn’t help. I finally had to restart my phone to get the annoying electronic music to stop. My guess is that this is a bug that occurs when you’re downloading or installing multiple apps.

The problem is the music is so grating that you really want to shut it off immediately. However, on silent mode, the game is disorienting as you can’t tell whether the tasks have been completed or not. The visual processing & completion of tasks that Sally’s Spa offers, is missing in this game and its a huge absence.

The graphics are mediocre, too tiny & bland to be able to make out expressions or even what is being cooked & served. One customer is much like another and the dishes are equally homogeneous. Buffet Dash Lite is blah and another must-not-have for Dash lovers.

IceCream Dash Lite is more a line-up-in-row game (like Jewels) than Time Management.The premise is that each order of ice-cream requires ingredient assembly. These ingredients are not simply scooped & served as in other food Dash games. A grid appears of different coloured

dollops. You have to line up 3 or more in a row to get them off the bin and onto the cone. It’s a novel attempt to marry two genres of casual games. Unfortunately it ends up being more of one variety and not the one that it purports to be, a Dash game.

The graphics are simple but a game of this nature doesn’t require very evolved images. The response time is a tad slower than the average line-in-one game, which means the game goes slower and builds frustration, since it is a timed activity. The music is monotonous but if you play it like you would play Jewels, you probably won’t even notice it. But by that premise, you probably want to play the original, Jewels, instead of a poor knock-off.

Ice cream Dash Lite is developed by Nalbam Soft and is available for free download in the Android Market.