If Bollywood made ‘The Avengers’ 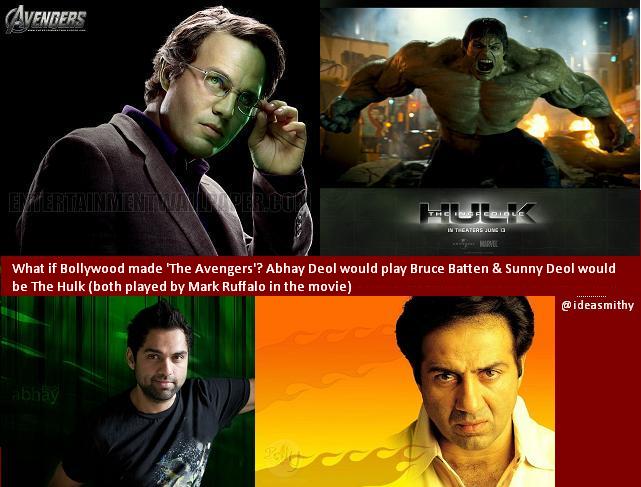 I caught the movie that’s been big on comicbook fans’s minds for over two years now and that everyone on my timeline is talking about – The Avengers. I’m a borderline viewer, which is to say that I enjoy the comics medium and know a bit about the characters, but I’m not a fangirl. This means I get to enjoy a good summer blockbuster movie but I’m not so tied in to it that I can’t let my mind stray.

During the fight sequences (admittedly awesome, especially at the Imax former dome theatre), here’s what ran through my head. The Hulk was SMASSSSHING his fists on the ground before launching into his attack and I murmured,

That launched me off into a curious daydream of a Bollywood Avengers movie, which kept me sufficiently occupied during the more extended action sequences. The Hindi dubbed version of The Avengers is called ‘Vinashak‘, which translates to The Destroyers, not the Avengers. I’m yet to think up a good name for the film since ‘Badlewaale‘ doesn’t pack the same punch as Avengers. More on that later.

What’s the cast to be?

With the 2.5kilo reference, the big, green ‘other guy’ Hulk cannot be anybody but Sunny Deol. Sunny paaji also has an equally sunny smile but it’s also accompanied by a raw, earthy force. I rather liked Mark Ruffalo in this role, even over Edward Norton because he essays the mild, affable, slightly hesitant character of Bruce Banner much better. Norton, in comparison looks too collected and in control, a look that suited Fight Club but not the ‘I’m a wreck inside’ alter ego of The Hulk. To come back to Bollywood, Bruce Batten needs a subtler, milder look so how about the more polished, ‘civilised’ member of the same family? He even looks a little like Mark Ruffalo. I’m thinking Abhay Deol in his wry, slightly sardonic avatar as the mild-mannered scientist turning into a roaring Sunny Deol (remember Gadar?) when he’s angry and well, green. Hee, that ought to satisfy the intellectuals and the salt-of-the-earth alike!

Genius, billionaire, philanthropic playboy. Read flashy, irreverent, flirtatious showman? That can’t be anybody but Salman Khan. Nuff’ said. Well, he might have something to say about the metallic armour that covers up the torso. For a desi version, he could have the electromagnet embedded in his bare chest and flashing cool lights. (If this were the 80s, that electromagnet would be in the shape of an ‘Om’ or perhaps ‘Ma’).

This Viking demigod wasn’t too hard to place either. Maybe it’s because I’m a fan of the mythology that inspired the character and the comic/film version doesn’t seem to do justice. But I’m convinced that Thor is the token pretty boy of this group, the oldest but curiously enough the winner of ‘Most Likely To Go Metrosexual’ award. Golden flowing locks, not too quick on the uptake (especiall with Batten & Stark around)…give it up for Hrithik Roshan!

Now, let me explain. Like any female Indian who was at a hormonal stage when Kaho Na Pyaar Hain was released, I greatly enjoyed the Golden God on the silver screen. But Agneepath put that to paid when I found every man in the movie laughing at being beaten up, except the hero who took the opportunity to bawl. These muscles are for flexing, not wielding and the God is for show only. Besides, he’s the only one who can carry off that bare-chested/skirted warrior suit.

This gets tricky since according to my informed sources, this character was drawn keeping in mind Samuel L. Jackson (who plays him in the movie). How do you compete with THAT? The clichedness of it pains me but it’s time to call in the senior Bachchan.

I am rather tired of seeing him play the ‘I’m older but kicking more ass than you’ role but who else? Irrfan Khan? Nah, that’s a good actor but not one who owns the screen the way Jackson does. This role needs the kind of screen charisma that doesn’t rely on good looks or acting talent. I’m drawing a blank. If you think of an alternative to Amitabh Bachchan, say it in the comments.

This one had me stumped for awhile. It’s appalling how cookie cutter, the current crop of Bollywood actresses are. No Kareena or Katrina for me. Rani has the sensuality but not the menace of Black Widow. Deepika Padukone has the perfect body type but her face conveys no more emotion (never mind menace or guile) than the Iron Man costume. Anushka Sharma was a contender. My only problem is that she seems too sunny, too chirpy to essay a dark character like Black Widow. If she were one of Charlie’s Angels, she’d be Drew Barrymore whereas we’re looking for Lucy Liu. I don’t think Scarlette Johansson is a very good actress but she has just the right look for Black Widow. The body is right on of course but the face really nails it. When she looks at you (or into the camera), you get the feeling you don’t know all there is to know and that you should be uneasy around her. Who then, can essay that?

The boy thought Mahi Gill would be a good choice. But personally I think she’s too earthy, too ‘heavy’ (not in a body mass way but in a body language way). This Black Widow needs a certain lightness of the sort that makes words like ‘lithe’ and ‘sinous’ make sense.

Much thought & discussion flowed before the image of another very beautiful and slit-eyed lady popped into my head. Remember the striking Chitrangada Singh (from Hazaaron Khwaishen Aisi)? Perfect.

Capt. America is a squeaky clean, whitewashed character. Who is the squeakiest clean man in Bollywood (umm, to the point of boring? Imran Khan. But a superhero? Noooo. His uncle wasn’t bad at all balancing chocolate boy looks with tough machismo. So Aamir Khan it is.

This one didn’t have a major role in the film but since he is an important character (and because I could think of someone who fit), he’s on this list. A sleek, lithe guy who starts off loyal, goes over to the dark side and then switches back again? It’s all in the eyes and that’s for Bollywood’s master brooder, Ajay Devgan.

That covers the superheros, leaving just one notable good guy who was also responsible for some comic relief (in a wry way). I think Irrfan Khan wouldn’t be wasted on the role of Agent Phil Coulson.

Who’s left? Just a manic, boyish, seedy villian who is also a Viking demigod-gone-wrong. Loki, like all villians is an interesting character, both in folklore and the movie. I’d really like to see Ranbir Kapoor in this role. He’s got the looks (chocolate boy-turned-menacing), the talent and the body structure to carry it off.

9 thoughts on “If Bollywood made ‘The Avengers’”