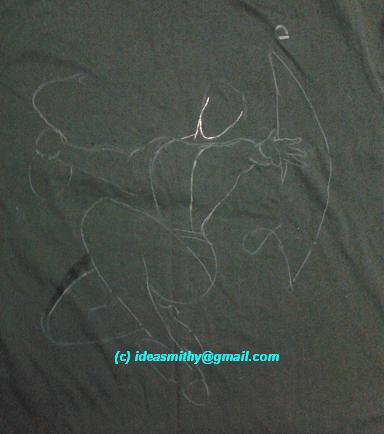 Actually, this should have been my first superhero-on-tee project for the boy. I had after all, heard of Nagraj, the popular snakeman character of Raj Comics. But the boy’s first choice was the dog-parented desi Batman and so Doga it was. Still, when I spotted this olive green tee-shirt, I knew the snake myth was calling to me.

I’ve been a fan of snake stories, the icchadari naag legend with its human-snake shape-shifters, the associations with Shiva (undoubtedly the darkest and most complex citizen of the Hindu belief system). I loved Snake Woman even if I couldn’t find the issues to complete the story. When I was a kid, I read a story about a king who secretly ate a piece of snake meat everyday, which gave him the power to understand the language of animals. And of course, JK Rowling’s attempt to cash in on the snake mystique with Slytherin and Parseltongue. I was quite looking forward to bringing my own interpretation of the snake story to life.

I’ve never been comfortable with the transition from sketching to colouring. My drawings usually turned out well and then were ruined by colour. With time though, I realised it wasn’t exactly that I couldn’t colour, I just couldn’t colour within the lines (yes, pun unintended). So I began colouring independently or painting directly on the surface without using lines to guide me.

Superheroes are tricky things to portray. For one, strong masculine physiques have never been my forte. And then there’s the fear of backlash from the fanbase. Superheroes attract staunch loyalists who will pounce on you for the tiniest detail that you got wrong, from the exact shade of costume, to the height of heel, to the curve of the logo, the hairstyle, expression etc. No chances I decided and figured I better chalk out a map and stay on course, no matter how long it took me.

I started by sketching the character in pencil a few times to get a sense of structure and pose. Then I replicated this on the tee-shirt using a soap marker (the kind that tailors use to mark out cutting lines). My mistakes which were easily rectified using water.

I found a shade (Sap Green) that perfectly matched the costume shown in the picture. I knew it would be too dull but I planned to highlight with pearl tints anyhow. Also, teeshirt hosiery absorbs a lot of colour and often the brighter colours lose their sheen as a result. The way around this is to layer on colours, waiting between coats to dry. That way the topmost coat is laid on a non-penetrable base (of colour) and stands out. Careful with this though, too many layers and if your colours are too old, they’ll peel off.

I’d intended to do something similar for the white snake crest down the front of the costume, layering with silver and white. But I made my white very thin with water and spread it across the area. This, I knew would make it dry with a water-colour like finish. As it turned out, it dried in the exact shade of grey that would make the white really ‘pop’. The same was used for the undersole too.

The skin was already going to be in that wonderfully authentic looking shade called Flesh Tint (used with great success on Sabu, I thought). Hair in black didn’t really show so I added a few touches of Pearl Blue to highlight it (a technique I see a lot in comic books). Fine brushed strokes of black created facial features. The Wikipedia entry for Nagraj says that he has blue eyes so I used a piercing Pearl Sky Blue for the irises with a black dot in the centre.

By this time the green was dry and I was ready to start highlighting. I started shading with Pearl Green, afraid it would end up too blingey. It did look rather bizarre against the Sap Green. But following the original picture, I also added black for the shaded areas. It still looked too much like a child’s colouring book, with the colours standing separately. So I fell back on my old favorite technique – blending.

You do this by painting when the colours are still wet. Where two colours meet, add water and mix them. Don’t be afraid to dip brushes into different colours without cleaning them, it adds interesting swirls of colour on the canvas. When I was done, I realised there was no trace of the original Sap Green visible, which was just as well.

I finished off the costume with Crimson for the pants and boots. The snakes were added later, using Pearl Metallic Bronze and Rust and V-designs in Black. I know they look a little artificial and too thin but that’s how they were shown in the picture. I could probably have played around with that but I just let it be. The final touch was to outline every border in the picture in black. This is what adds that comic-book look to the picture.