Because Dating Doesn’t Have To Be Drama & Disasters 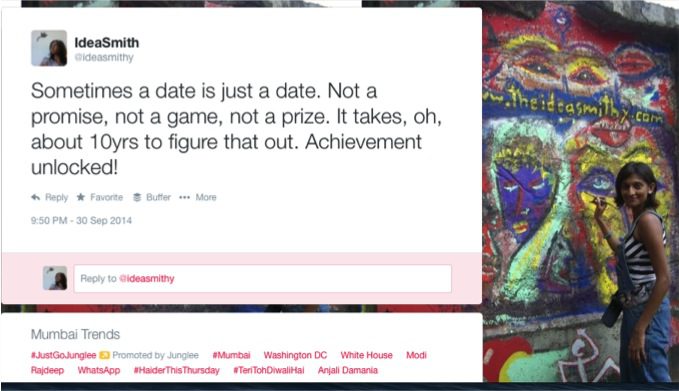 The last time I spoke about dating, I was cribbing about Indian men, digital platforms and the world in general. But like the times I rarely speak about, I’m regaining my peace-equilibrium with the world I live in, that fails to please me, on occasion. And as with pizza, beer and brinjals (*aubergines*), I’m learning to enjoy it.

This post by 50DatesInDelhi made me very happy. She clearly had fun. I don’t know this for fact but at least as far as the limited view of her that exists in my life via her blog, she seems to not be overthinking it.

Last week, at an Open Mic, someone forgettable performed a piece that held us spellbound. Manisha verbalised what we were all feeling. And then that person came back to explain why they wrote it, what they were feeling etc. Manisha cut them short with,

Someday I will learn to be as brutally profound as that. But both these instances capture the essential wisdom that seems now in my tenuous reach.

Dating is a way to meet people and form connections. It is an unpredictable, no-results-guaranteed activity. But it is also time spent, pinned on a huge, big hope (whatever that may be for you). Why kill it with agendas that you have no way of ensuring are achieved?

I have actually been going out, between the time I wrote that last post and now. I’ve just not been thinking much about it. What have I been doing? Dinner, drinks, lunch, walk, movie, chat, the usual. Who are these people? They’re just, well, people.

This is not to say that I’m running blindly through men. Indeed, I’m not. I’m too snooty/chronically middle class to go out with just about anybody. Plus, time is everlastingly a constraint in this city and in this life of an identity-juggling sometimes entrepreneur. I have been going out now and then, with people I have found likeable, whose company has been enjoyable. And they’ve stayed that, not turned into fictitious hero figures in my head or co-stars in elaborate real world dramas.

I’ve been having great conversations. With men, with women, with friends, with persons-who-may-become-something-else. There has been laughter, boredom, book talk, awkward moments, romance, disgust, attraction, meanness. And the whole jing-bang has been so much fun.

Yesterday, I found myself in possession of a whole bunch of hours that were not promised to a deliverable, a client, a prospect, a meal, an activity or a friend. It felt like a good time for a bad movie. A message that I sent, got a reply much later. I was on my way to the theatre, anyway. We wasted an hour joking about book titles. Then we sniggered and sarcasmed through a movie that must have been made for just this. And then I came home, had dinner and went to bed. Today was a good day, full of work and feeling at peace because I was well-rested, my laughter glands well nourished and not feeling the weight of worrying about what last evening was supposed to have meant.

I don’t know where I am heading with this. Chronic singledom? A string of meandering non-relationships? I have no idea and for a change, I’m not thinking about it. I’ve tried the relationships models on offer and they didn’t work for me. Maybe the people didn’t but either way, I’m not going to find out by brooding about it.

People can be fun. And that’s a new idea for me. I’m just enjoying it.

Romancing A Girl Who Is Too Much