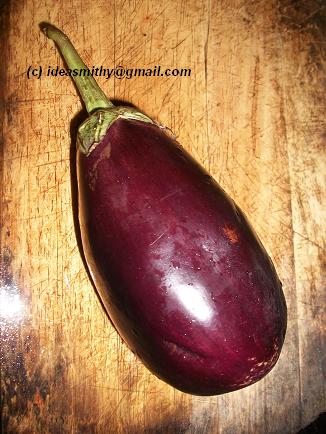 I peeped into the kitchen. The smell was making my stomach growl. The stove in our kitchen is right next to the east-facing window. Most times, one needs a super-high-powered pair of sunglasses to avoid the sting of sunlight on the bright metal utensils going about their business on the burners. But this was an unusual sight. On the burner, sitting directly in the lap of the orange flames was a fat brinjal. And it smelt so good, I tangibly lusted for it.

Dinner time and I held out my plate expectantly. To my utter dismay, my mother’s pleased expression hovered over an evil-looking sticky goo, that she proudly pronounced,

Science tells us that our taste buds actually detect only four sensations – sweet, sour, bitter and spicy. Everything else is only smell. I want to add to that, texture. I lived my childhood in perpetual terror of being force-fed ladyfingers. The gooey, sticky texture reminds me of an evil green monster drooling mucus. No, I’m not kidding. Ladyfingers make me want to puke. I’d put up a terrible ruckus when I saw mum buying a kilo and be dragged home screaming. Brinjals (or aubergines) were consigned to a similar fate after I was force-fed bharta with parotas. Why would anyone want to torture me by making me eat muddy slime?

Over time, I managed to resist things I couldn’t bear to eat and the goo-cooking continued unabated while I passed, indifferent. Well, almost. The smell of cooking brinjal is always appetizing. It’s right up there in the same league as frying onions. Feel your mouth watering, already?

Anyway, I decided to face my fear once and for all. Brinjals, unlike ladyfingers are actually beautiful vegetables too. That rich purple hue has to adorn food fit for kings. So I set about wondering how I could actually make its taste live up to its colour and smell.

—(Read the post on my new food blog, Plain Salted)—

Bengali cuisine has a dish called ‘baigoon bhaja’ which translates literally to fried brinjals. I don’t remember when and where I’ve had this dish but I described it to mum and she made it for me. Success!

Then I suggested she add a dash of sugar which made her grimace. Mum is from the school of thought that namkeen and sweet do not mix. But I insisted she try and admist much muttering, she did. I was the only one who even tried the bhaja that night and I was glad. It was delicious!

I’ve tried it out myself a few times. After sugar, curd was my next addition to the masala recipe to give it that tangy taste. Last week I came up with the version I enjoyed the most. Here’s the recipe:

1. Chop the brinjal into very thin slices. The thinner you slice, the more crisp the chips will be. At the thicker parts of the brinjal, you can also cut it in half or quarters to ensure bite-sized pieces. Soak them in salt water.

2. Pour the batter ingredients into a broad plate or dish. Add water and mix well, making sure to remove lumps. The batter should not be too watery or it won’t stick to the chips. I’ve stopped taking sugar in my tea, preferring the aromatic, gentleness of honey instead. I reasoned it would perform equally well in this recipe too and it did! The honey brings a lovely body to the masala without making it noticeably sweet. I suggest tasting the batter with every new ingredient you add. You’ll know what I mean then.

3. Shake water out of chips and soak them in batter. This is to ensure that the batter doesn’t get watery from the chips dripping.

4. Heat the oil in the pan.  When the oil is hot, deep-fry chips. Don’t fry more than 5-6 at a time as the ones at the bottom get singed and the ones in the middle may not be cooked properly.

5. When the chip starts bubbling or turning brown, flip over in the oil.

6. Take out of the oil when both sides are browned and place on a tissue-covered plate to drain out excess oil.

Serves 4 people as an accompaniment to rasam or sambhar rice.

9 thoughts on “Brinjal Chips: Purple Food For A King!”