Skip to content
My Soulmate Is A Book Pop Culture 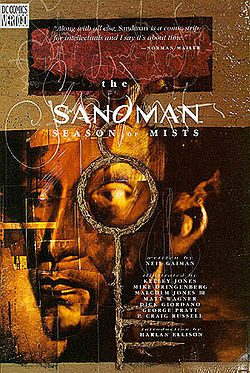 Season of Mists by Neil Gaiman
My rating: 4 of 5 stars

The fourth Sandman book is where you get to meet the entire Endless family in one place – or at least the still active ones. Destiny, the eldest, calls for a family conclave. Desire needles Dream about sentencing Nada (from Book 2: The Doll’s House) to hell for declining his proposal. Death, while attempting to pacify Dream, concedes that he has indeed been unfair to Nada. Stung by this, Dream resolves to go to Hell to bring Nada back.

Dream prepares for his destruction in Hell, anticipating that Lucifer would not have forgiven him for the Choronzon episode (from ‘A Hope in Hell’-Book 1:Preludes & Nocturnes). To his surprise, he finds Hell’s gates open to him and furthermore, Lucifer clearing out Hell. The Devil abdicates his role, locks up Hell and hands over to Dream. Left in charge of the most prized real estate in the psychic world, Dream finds himself being alternated propositioned and threatened by the various factions wanting possession.

Once again, a Sandman story performs a double-act with a narrative that entertains and at a meta level, leaves us with a profound idea – In carrying a grudge, we condemn our loved ones and also ourselves to hell. We aren’t condemned to hell; we condemn ourselves to it. The Devil may be no more than a hapless, twisted aspect of ourselves, struggling from patterns and ultimately falling into it again.

As with the second book, this gritty narrative is interspersed with the spooky but oddly cheerful tale of Charles Rowling, a schoolboy murdered in a bizarre boarding school ritual. The story also ties in with the larger theme of hell.

“I think Hell’s something you carry around with you. Not somewhere you go.”

View all my reviews or just The Sandman reviews