The Complicated Matter Of A Simple Question 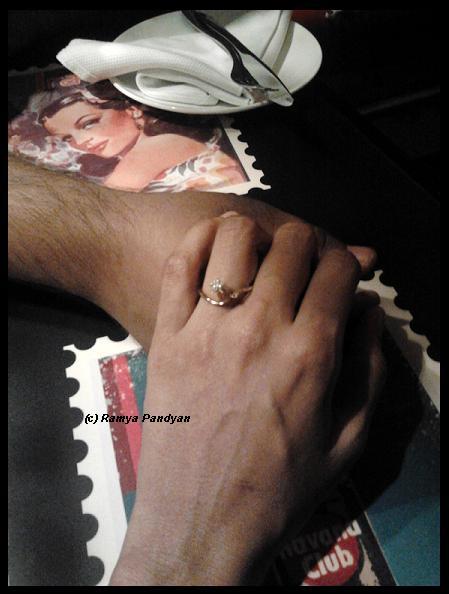 So I did the predictable thing. Waited till he got to visit the men’s room, switched on my phone and tweeted about it. Then, I spotted him returning so I switched off my phone.

Did you know, that comments on Facebook relationship statuses show up in two different lots? The same update of ‘X is with Y’ shows up on X’s friends timeline and on Y’s friends timeline. Facebook sees them as two different things so the comments & likes on each are displayed seperately. Of course, what’s really funny is that both X and Y are tagged in the relationship update and so each of them gets two sets of notifications. Like seperate congratulatory messages from X’s friends and Y’s friends. Bizarre feeling.

“I can’t breathe. I..err…I need to eat something.”

Frantic gulp of the champagne. Vague thought that the knees must hurt in that position. Shiver because of the sea breeze. Wondering if my carefully applied make-up was running, then remembering it was smudge-proof. Then, belatedly realizing he was still on bended knee. And saying..

like I was answering, “Will you have a starter too?”. To his utter credit, he didn’t miss a beat or even waver in that admittedly uncomfortable position.

That’s probably what they mean when they say ‘made for each other’. And before you roll your eyes, he says and I agree that – it’s only corny when it’s happening to someone else. 😉

14 thoughts on “The Complicated Matter Of A Simple Question”