Survivor’s Guilt In The City Of Gold 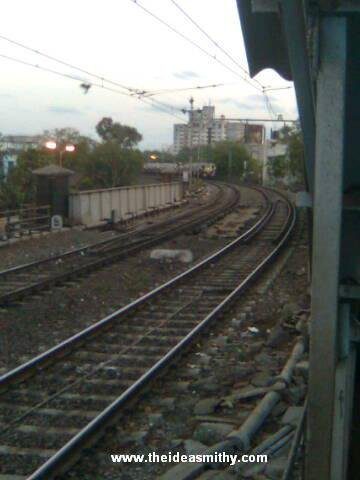 When I wrote this post earlier this year, I doubted anyone would actually read it. It was something that I wrote because I felt I had to, for myself.

My first brush with this story was back in 2000. A young greenhorn, freshly out of college, I’d been given an internship that would take me around the city and (I hoped)

be my stepping stone onto the corporate ladder. I looked at the list, clutched in my fist and read through the rainwater dripping off my hair, an unfamiliar address. It was the first time I had stepped off at that station called Lower Parel. In the years to come, it would become home station to me as I passed it everyday on my way to and from work. But back then, I didn’t even know about the staircase at the end of the platform that lead to an overbridge. I walked out into a busy market, even then as filthy as current-day Mumbai with its roads bruised by incomplete construction.It was pouring. I walked all the way through muddy puddles, broken roads and unidentified messes. On either side, high walls towered around me, the kind I had only ever seen in Hindi movies of the late 70s. Instinctively I recognized them as factories and mills.

A few years later, my career took me to the other side of the tracks to a place with

the quaint name of Chinchpokli. The first time I heard that name, I really thought the speaker was kidding. But he wasn’t and the directions he gave me were ones I would follow for the next four years. I’d spend my lunch or coffee breaks walking around near the office. My wanderings took me past the plush building, past the post office, right through the heart of an old-fashioned bazaar (complete with clay pipes, stacks of tobacco shavings, religious pictures and plastic jewellery). The back gate of my office compound led into a narrow lane, which ended up at another picturesquely-named station, Cotton Green. Both sides of the lane were flanked by those same high walls, broken windows and architecture of another era.

My father is the one who told me the tragic story of the mill-workers in Mumbai. Once I saw a play called ‘Cotton 56, Polyester 84‘. The story of two mill workers whose lives are permanently put on hold by the strikes and their pathetic attempt to pass their days counting the number of people wearing shirts of either fabric stayed with me. I had no words to describe what I felt, though.

I spoke to the boy (a relative newcomer to Mumbai) about this sometime back.And he is the one who dug out this movie for me to watch. City Of Gold is the appropriately titled story of the greed, the desperation and the angst that collide and fuel this place that I call home.

The movie begins with the phasing out of mill divisions and the subsequent protest strikes by the mill workers. A mill worker was one of thousands who trained in a specific job and spent all his adult life doing just that. His peers were his colleagues, his friends and true to the Bombay chawls, his neighbors & family. This simple, defined world was thrown into despair when the strikes began. Not only did the mill worker lose his job, but his self-esteem was battered, his relationships worn down and the social structures that he belonged to, eroded.

The mill workers had been working people with all the sense of respectability and pride characteristic of the middle class of this country. But an entire generation was suddenly rendered jobless, unemployable and thus, impotent. Knocked over from their traditional roles as bread-winners, their families suddenly found themselves struggling to cope both financially and emotionally. Anarchy reined. Their women, traumatized by the shift in gender roles turned into incessant nags, dejected by life or fell prey to bad decisions with irrevocable consequences. Their sons, similarly tortured, varied between escapism of every way to crime.

City of Gold focuses on one family and some related characters and how these events shaped their lives. It’s sobering to see what one normally reads as a newspaper headline over morning tea, turn into a catastrophe that destroys entire families. The boy described the movie as ‘hard-hitting and pulling no punches’. I’d agree. It’s grim, it’s tangible and it’s real.

Speaking objectively (as much as I can, anyway), this movie could have been a dreary, heavy documentary but it wasn’t. The characters all felt real and well-defined. The movie also pulled together diverse sub-plots and zoomed between the larger reality of the mill strikes to the mundane dramas of everyday lives of the workers perfectly. What was most interesting was that a story with so much berth to fall into controversy, finger-pointing or preaching, didn’t. You can almost picture the story-teller, gritting his teeth to stick to the facts and pass no judgment while at the same time empathizing with the horrors faced by these people.

My only real grouse was with Anusha Dhandekar (who plays a very small role in the movie) since her bubble-gummy, glittery self seemed out of sorts in a movie of this nature. But the boy brought home the point that she was meant to represent the viewer (the entire story is a flashback, narrated to her by a man who grew up in the mill worker chawls). That touch actually makes the movie even more real.You and I after all, can have no more than a very superficial impression of what elapsed in that historic period in Mumbai. She is what connects us to the movie, just the same way that the glitzy malls and hip pubs that stand on those places today, do.

I loved the movie. It tells of a people I never knew, of a time that was before me. But it speaks the truth of the city that I call home. I cannot, in good faith, call myself a true Mumbaiker by enjoying the glamourous urbane life with no thought to what built it, after all. Mumbai, Island city, Maximum City is a place of much dazzle and money and it all stands on the remains of exploitation and greed. It is survivor’s guilt but I think that is the very least we owe to the people that lost everything to make this city home for us today.

City of Gold was released in both Hindi & Marathi and directed by Mahesh Manjrekar.

5 thoughts on “Survivor’s Guilt In The City Of Gold”