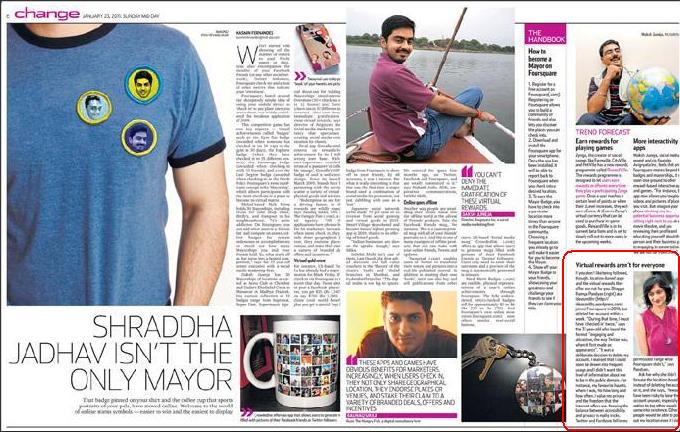 Mid-Day has a story by Kasmin Fernandes on Foursquare today. Moksh and Daksh Juneja have both been quoted while I provide a counter-perspective on this social media game that’s rapidly gaining popularity. Here’s what I said:

Virtual rewards aren’t for everyone

If you don’t like being followed, though, location-based apps and the virtual rewards they offer are not for you. Blogger Ramya Pandyan (right) aka Ideasmithy (http:// ideasmithy.wordpress.com) joined Foursquare in 2010, but deleted her account within a week. “During that time, I must have ‘checked in’ twice,” says the 31 year-old who found the format “engaging and attractive, the way Twitter was, when it first made an appearance”.

“It was a deliberate decision to delete my account. I realised that I could soon be drawn into frequent usage and I didn’t want this level of information about me to be in the public domain. For instance, my favourite haunts, where I was, for how long and how often. I value my privacy and the freedom that the Internet offers me.

Ask her why she didn’t forsake the location-based app instead of deleting her account on it, and she says, “It would have been risky to leave the account unused, especially if an option to tag other people came into existence. Other people would be able to point out my location even if I didn’t.”

I must add, reading what the Junejas had to say on this was like facing temptation all over again! I was an avid ZyngaGamer after all so I’m a natural target for any community-based online activity. But I’ll stick to my stand and keep off the lure of mayorship for now!

3 thoughts on “Quoted In Mid-Day FourSquare Story: Shraddha Jadhav Isn’t The Only Mayor”