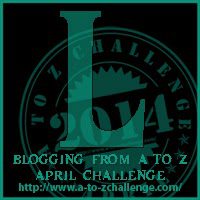 I’m falling utterly behind. So I decided to post this already written story and catch up on the missing three later. Here’s another attempt at epistolary, this time in a more traditional, simple manner. Two letters I give you for today’s A to Z Challenge in the form of L is for Letters I’ll never send.

I can imagine you dropping your iPhone, your nonchalant poise destroyed, if I were to call you that in person. It has been years since I called you that, after all. A decade and half to be slightly precise (as you once said). Yes, I remember. Kidster, I will always be your big sister. You and I both know, I will always be able to call you out on the elaborate opera you put up for other people. I can still do it.

You’re a master at it, I will give you that, Lolly. Silly boys, they are so dazzled by your fireworks, they never notice the things you do to them. You’ve had a good, fun run and I don’t grudge you that. Heaven alone knows, I can’t. After all these years

You’re 26 now, pop-pop. I can see your defenses solidifying into confidence. You don’t play those games with ma and baba, that you used to. I think you’re actually learning to be a little kinder too. Or is it just Jimmy that you’re that way with? It must be love, true love at last. I bet you’ve never told him that. But I know it. I know you, poppet. I wish we had not

Do you know what you are getting into? Marriage is a big thing. Look beyond the wedding. Are you sure you want to spend the rest of your life with someone who makes you different from the way you are with the rest of the world? Do you think he will love you as much as. You will probably think that it’s an indication of true love. Maybe it is. Will he still love you

But true love, is that a recipe for happiness, child? Jimmy is 31. He isn’t one of the boys you twist around your fingers easily. After the excitement has subsided, you might find that you don’t like the idea of someone who knows more than you do, who is able to see through your little dramatics.

You’ll be fidgeting by this point but I know you will still be reading. This is the first real conversation that you and I have had in 14 years, after all. My darling idiot, my namkeen poppet, my half-sucked lollipop dear, how I miss you. You were always my baby, even after we stopped speaking. I know you will never forgive me for changing as I did, inexplicably. I’ve never forgotten the injured look in your eyes, when I shut the door on your face for the first time, and told you, “Privacy is a thing, Lalita”. I think my calling you by your full name is what injured you the most.

I know this, Lolly. I know this because I never stopped being your big sister. And I know this because you allow Jimmy to call you Lolly. I know you’re trying to hurt me, by letting someone else share that special nickname. Mission accomplished, child. But it’s really more important that you look at what that is doing to Jimmy and you. I reiterate, he isn’t a boy. Tread carefully, now. You are an adult now, not a little girl whose big sister dropped her, without explanation.

These are my words to the wise and please be wise, Lollypop.

With all the affection of 14 years that I withheld,
Arpita.

Is this what you’re doing? The next time I see you, I want you to answer this question. Wear a white shirt if the answer is yes, a blue if it is no.

You may wonder what right I have to make demands, to ask questions. Fair point, I say. So I’ll give you an answer to buy back the right to question.

What happened in 1997? I missed my monthly date. It was the first time that had ever happened. Remember how we used to scoff at Hindi movies, where a stormy night was all that was needed to get a girl pregnant? I have never been on a hike after that.

Why did I not tell you? We broke up two weeks later. I wonder if Priya Shah ever knew all the relationships that she ended up destroying just by existing. No, I know you never had anything with her. I found out only four months later when she got engaged. It was too late by then.

What did I do? What could a 16 year old pregnant girl have done? We didn’t have iPill back in ‘97. Or Google. I went into the bathroom and hit myself in the stomach with a hammer twenty-four times. At some point, I also drank some phenyl. It tasted so bad, I got scared. I ran back into my bed and huddled under the covers. I woke up half an hour later, vomiting. And when I finished throwing up, I realized there was a pool of blood at my feet. I mopped it up and went back to bed. In the morning, my mother thought I had just got my period in the night.

Lalita knocked on my bedroom door that night, surprised to find it locked. She used to come to my room and snuggle up next to me sometimes. I shut the door on her face that day. She never came back.

She is nothing like me, a fact that I’m sure you’ve gathered by now. That probably sounds like she is easier to manage. She won’t leave you with a trail of questions. She won’t go into long silences when she is displeased. In fact she’s rarely displeased. She gets disillusioned real often though. It is now your burden and responsibility to keep her illusions intact, till the next time she spots a crack in them. Do not try to introduce her to reality. That privilege has been mine and I chose not to, years ago.

I’ve given you three answers and in return, this is what I want – your answer and thereafter, your silence. We could have had a family, years ago, but we didn’t. And now this is a chance to be a family again. Don’t destroy the chance as I did, in 1997.

I know you really are going to be wearing a white shirt the next time I see you. I will smile at you and show my pleasure at being introduced to you. And we will have a family dinner with my parents and your father.

Welcome to this family, brother-in-law.

*Image via Simon Howden on FreeDigitalPhotos.net

Dec 20, 2021 IdeaSmith
My Soulmate Is A Book Nostalgia

5 thoughts on “L is for Letters I’ll Never Send”