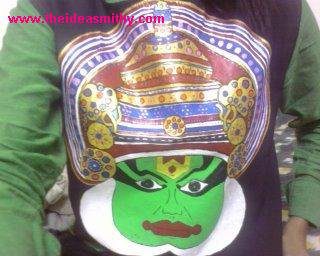 I’m fascinated by Indian designs, motifs and art forms. Such vibrant colour! Such dazzling variety! I did a set of pieces called ‘Tandav’ using motifs and images from Indian dance forms. Sadly enough I didn’t think to take pictures back then and most of those garments have been worn out and discarded.

Kathakali (for the uninitiated) is a classical dance form from Kerala. The movements are small and detailed, all in the eyes and fingers. The costumes, especially for the men are the most delightful part of the dance. The make-up and costume apparantly take upto 6 hours to don. I was fascinated by the phlethora of colours on the Kathakali costume. This is my tribute to this grand art.

I used a plain black terrycot vest. It was a few years old and unused because it was too broad for me and the fabric wasn’t the soft, clingy variety that would look good, loose. It turned out to be perfect for holding an elaborate, heavy paint picture and the black background was just what I needed to offset all the colours. Black is the one colour that you won’t find in a traditional Hindu costume so it brought out the other colours really well.

I looked up a number of photographs of  Kathakali costumes before settling on this design. Instead of a complete costume as I had originally planned, I decided to concentrate on only the face since I felt the detailing of jewellery and make-up was a masterpiece in itself. My painting is a close-up of just the face of a Kathakali dance hero. The final result was a mixture of several different costumes that I saw.

The painting looks very elaborate but was actually very simple to execute. The lines were clean, I didn’t need to use any shading and the drama in the piece comes from the vibrant colours.

I outlined the face with a sliver of soap. The outline took several tries before I could get it to be perfectly symmetrical and even then I did make one side slightly larger. The thing about fabric paints is that you never erase, you  just paint over or improvise, which is what I did here. The curve on the right of the face was actually smoothened out by painting over with Fevicryl no.02 Black. Okay, I cheated. 🙂

The bottom piece is Fevicryl no.27 White. I refrained from using silver (even though it would catch the light well) because I wanted to retain the authenticity of the image. The jewellery was  Fevicryl no.352 Pearl Metallic Gold and for the sapphires, I used  Fevicryl no.32 Cerulean Blue. I had actually used plain red for the jewels but it didn’t look as impressive, especially since the swirls on the headpiece were the same colour, so I painted over with the metallic range.

Initially I had thought I’d leave the eyebrows and kohl edging unpainted since the background was black. However after finishing the rest of the piece, those areas looked dull (on account of the shiny dry paint) so I finished them up with  Fevicryl no.02 Black. I also outlined every border between two colours in the same black. This makes the colours stand out better and should be used only when shading is not used.

Incidentally I painted this piece when I was nearing the end of my colour stock so I also used the opportunity to clear out the little remaining paint that I had in most of my bottles. Hence there are some uneven splashes of colour here and there that are not duplicated elsewhere (because I ran out of that shade!). I think it adds to the vibrancy of the piece without any one colour making a statement in itself. I wanted the facial green and white edging to be the central focus.

The one tricky bit was the face itself. Having finished the big areas of colour, I was left with a bright piece which did not quite look human. Adding lines on a sketch of a face is always risky since it can make your subject look old. I used a hairfine brush to add a few strokes for nose. The laughlines were an afterthought and I actually drew them too long which made the face look pulled down. So I corrected by painting over with the facial green. A couple of spots on the right corner of the face and little dash under the lower lip made it seem more human.

Since the vest was still too big for me, with gaping, wide armholes, I teamed this up with a bright green FabIndia shirt. The shirt itself was an impulse buy and I didn’t quite know what to wear it with since the cut was too severe for casualwear and the colour too bright for office. Since only the sleeves are visible, it matched the green face paint of the dancer well. I’ve always worn this with classic blue straight-fit jeans but I daresay straight black pants could add a slightly more evening-formal look. If I was feeling upto going all gypsy, I’d wear this over a flowing skirt.

(If you like this piece, watch for Desert Dancers, another other Tandav piece that I’ll write about, shortly)

Other Indian designs at Kolam and Desert Dancers.