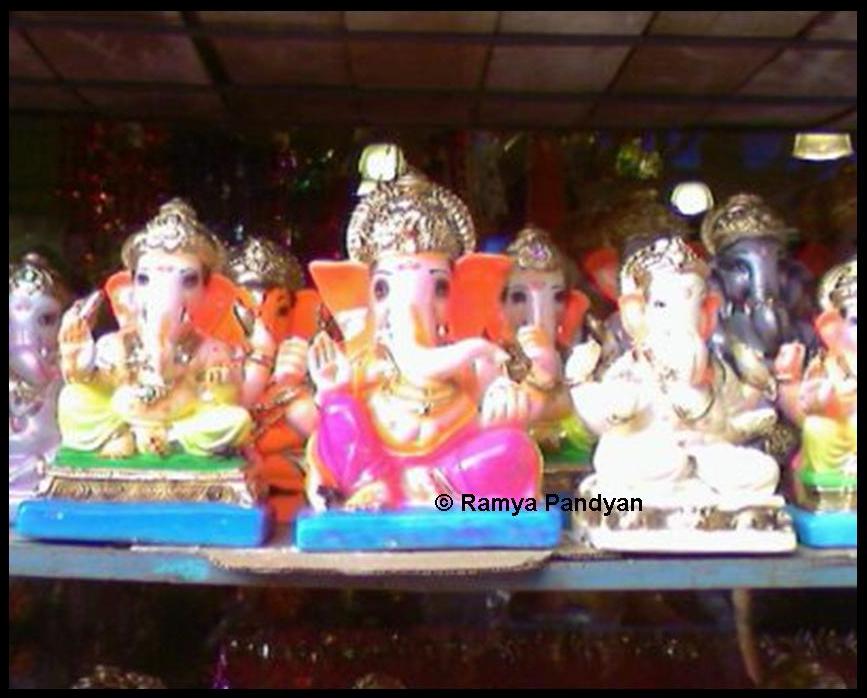 It turns out that May is Short Story Month. So I’m going to try and serve up a Tiny Tale every day through May. Enjoy!

Chandran stepped into his hawai chappals, grimacing. Even his slippers were slick with sweat. Nevertheless, he moved to the balcony, hoping the sky would be the monsoon grey that it should be at this time. No luck. The shop downstairs was blaring their music system. Chandran imagined flinging his slipper but had to satisfy himself with yelling,

Nandanbhai didn’t bat an eyelid, as he turned to send a red shower out of his mouth, onto the pavement. That Madrasi on the first floor did not have any manners. Godless people, cooking fish all the time! He turned back and touched the picture behind him, asking for blessings from the goddess of prosperity. Diwali was a few weeks away and he hoped Lakshmidevi would not withhold her bounty from his shop because of his nastik upstairs neighbor.

Outside, the kids were playing on the pavement. Chandran thought they were probably too dehydrated to be playing cricket in the ground. If August was this hot, what would October be like? He decided to take a walk, hoping outdoors would be drier and cooler.

By the time he took a turn around the ground, visited the cigarette shop and made his way back through the vegetable market, darkness had fallen. The kids had gone home, leaving behind a little circle of stones. He sat down at the bus stop and took out his mobile phone. The baniya would probably still be blaring his music and it would be impossible to hear himself think, at home. Shriya answered on the first ring.

Nandanbhai looked around the shop. He’d locked the cash drawer and the back stores. Then he turned and touched Lakshmidevi’s feet one last time before switching off the electric diya in front of the picture. Jignesh would be at the counter now till closing time but he was not allowed to touch the mandir. As he stepped out, he spotted the nasty nastik across the road, talking on the phone. He spat into the gutter and walked away.

Chandran unclenched his fist. He was silent but Shriya’s voice was droning on incessantly. His palm smarted as he realized the skin was lightly bruised from the stone he had been clutching. He chucked the stone at the wall. Some mud crumbled away as it made impact. Pausing to add a token ‘Hmm’ to the conversation, he bent and picked up another from the pile the kids had left behind. He aimed for the same spot on the wall that his last throw had touched. It rebounded off and hit the ground. The “Hmm”s went well with the throws. By the time he went home, it was past nine and the stone pile lay scattered across the road.

Nandanbhai was woken up at 6 in the morning by his phone instead of his wife. Jignesh’s frantic words had him scrambling and calling to his wife to join him at the shop. When he got there half an hour later, there were so many people on the pavement that it took him awhile to get to the shop entrance. He sent a prayer heavenward that the lock was on securely. Then he turned to join the throng, curious about the commotion.

Chandran would have slept through the noise. After all, it wasn’t the volume but the pitch of the baniya’s music that disturbed him every day. But his neighbor rapped on the windows until he woke up. “God has blessed us!” she told him excitedly before hurrying away. He moved to the balcony blearily and noticed the throng on the road outside, for the first time. They were milling around the bus stop on the opposite side of the road, the very same one he had been sitting at the day before, in fact.

Nandanbhai had made his way almost to the front of the crowd by this time. It was true, then! The wall behind the bus stop was usually plastered with posters but was empty today. And the loose mud behind it had fallen off to form a rounded shape familiar to everyone in this city as its most beloved God – the elephant-headed deity. Ganeshji had blessed their street with his arrival, indeed. What an auspicious occasion!

Near the shop, a boy, sitting in strong arms asked his father, “Why are they shouting?”

“It is a chamatkar!”

said his father and carried him into the throng.

The boy turned and stared upwards. His eyes made contact with Chandran. He nodded and turned to look at the chamatkar.

Explanation of all non-English terms used in the story:

2 thoughts on “MayShortReads 01: The Man Upstairs”