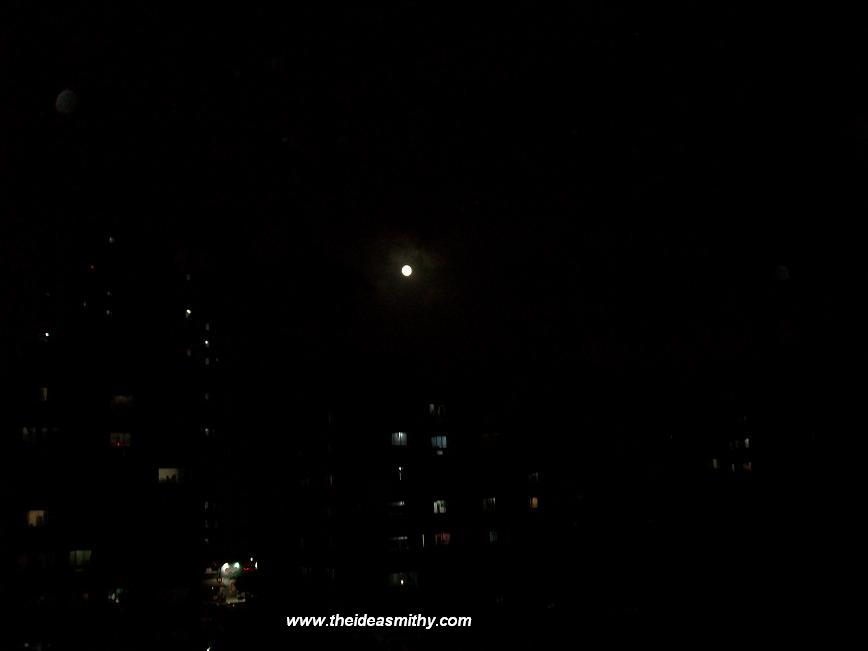 A park separates them.

If it can be called a park, that is. A grassy patch chequered with muddy patches, that turn into puddles in the monsoon. The dogs like it anyhow. They keep him awake at night with their barking. Nobody seems to care at 2 in the a.m.

This night is filled with little vapours of heat rising from under his neck each time he shifts, on the pillow. He sits up and puts his feet down on the floor. The ground is cool and the thought of sleeping there occurs to him. But he turns it aside. He’ll only wake up with aching muscles. A sudden buzzing in his ear reminds him of the reason he woke up. Getting up is surprisingly easy. He supposes he didn’t really fall asleep earlier. So he crosses the room to draw the mosquito net across the window. Small relief, that, the mosquitoes still get in mysteriously. He curses the puddles, the lazy gardener responsible for the park’s upkeep, the real estate agents for whom it’s a reason to hike up the flat’s prices.

His head hurts. The EMI is due in three days. He could put it on his credit card but then what will he shop with for the rest of the month? The incentive. One windfall that’ll take care of all his problems. But he’s having trouble even keeping up with so little sleep. And the worry keeps him awake nights. Not for the first time he wonders how different his life might have been if he hadn’t bought this flat.

A thin rivulet of sweat runs down the side of his forehead. In the heat, it is almost a relief to feel something cold. The ice of his impotence.

A sudden gust blows across his cheek and he slides back the mosquito net and leans out to catch it. It’s gone. Great, a grand welcome to more mosquitoes. But he doesn’t pull back. He’s past caring now.

The city is never completely dark. The lights on the billboards, the neon sign flashing the name of the mall next door (another reason the real estate rates are so high) all contribute to little stray beams. Like leftovers thrown to the dogs, even the park is aglow in an imitation of moonlight. The dogs are scampering.

Indistinguishable sounds float above the hum of electronic and digital noise. He squints into the darkness for the source. All around the park, ghostly black shapes tower, the other buildings that share the park. It’s like a crossword or a reverse of one. More black but a few white (and yellow) squares here and there. He looks at the familiar visions of other late-nighters. A fan is going in one while flickering images of a TV from another throw out strange reflections on the facing building. And in the building exactly opposite, a blue-white window frames a dark silhouette.

They face each other, separated by the park. He feels the need to avert his eyes immediately. It feels like the figure opposite is aware of him, knows he’s been watching. When he looks up, the figure hasn’t moved. So he stares back, defiantly. Soon discomfited, he turns away. But the bed is still warm to touch and he can’t see the window from there. So he stands up again.

His stomach flutters and little beads of sweat form on his forehead, this time a different temperature. It’s a curious, forgotten feeling, this knowing that someone else is awake at the same time. It feels companionable.

The dogs began whining again and he grimaces. He could strangle the barking ones. If he only dared. Suddenly a shout rings out and he hears what sounds like splashing water. The figure across is holding up something that looks like a plastic mug. He starts laughing. It’s effective, he thinks. The dogs vanish almost instantly. The park unites them, now.

The silhouette places its left arm on the hip, or perhaps on the windowsill. Its other arm is crooked at an angle and seems to be saying hi to him. But it isn’t moving so he concludes that it is resting on a screen. Then, impulsively, he lifts up his hand and mirrors the pose.

The figure shifts immediately to its left. It’s a woman or perhaps a girl. Her nose is sharp and ends in an equally defined chin. She turns again. Then she lifts up her right arm and reclaims her pose. It’s like she’s saying hi back.

When he returns to bed, the clock shows that it has been seven minutes since he got up. He turns around again. The figure has gone but the light is still on. The dogs won’t come back tonight, he thinks. He lies down and shuts his eyes. In a few minutes he’s fast asleep. The park rests easy tonight.

3 thoughts on “Tiny Tales: The Park”