The Bystander Chauvinist And Me 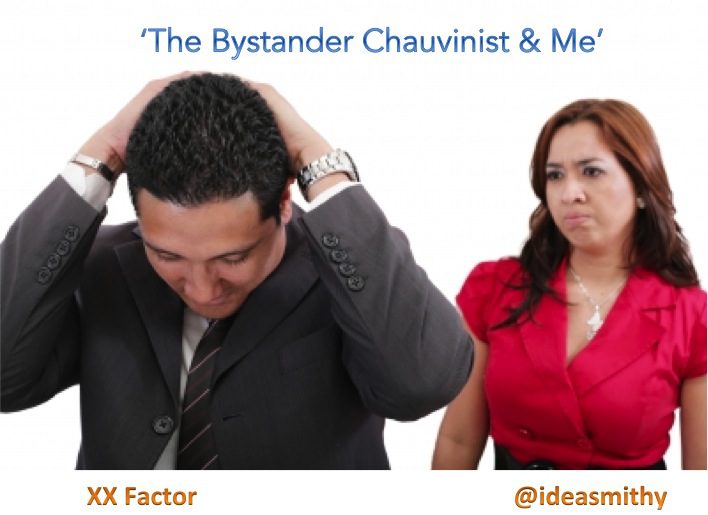 The men I know, are not likely to murder their unborn babies in the womb for being female. They will probably not set their wives on fire for not bringing in dowry. They won’t insist on their women climbing into the funeral pyre after them when they die. They’ve never actually said anything like ‘Women are inferior’ (which by the way, my grandfather said to me, so please don’t say that nobody says such things). They also have no intention of raping or murdering their female colleagues, friends and neighbours.

I can understand why this kind of man feels victimised by the more aggressive feminism. “But I’m not that guy!”, I hear him protest,

“I’m not a bad person. I admire strong women. I believe women have their rights too. Why then, do you club me in with the rapists, the acid-throwers, the foeticide practitioners and the dowry thugs?”

It’s because doing and being the things I mentioned in the first paragraph, do not preclude one from chauvinism. The fact is that we live in a world that ranges from subtly chauvinistic to brutally hostile to women. Normal life is painted in shades of poor treatment of women; it’s just the degrees that vary by geography and socioeconomic class. So unless one actively goes against the grain, taking a stand for fair treatment of the sexes, one falls into chauvinism, by default.

Let’s meet the aforementioned man again. He is not a bad person. He is a law-abiding citizen, thorough professional and a responsible family man. But he doesn’t actually believe that women have worse lives than he does; even the women in his life. He has little patience or sympathy for the realities of women’s problems. And when forced to confront it, he usually responds with control issues –  the sister’s social life to be monitored, the mother to be ‘shielded’ from all manner of reality, the partner’s clothes to be censored. No, he doesn’t even understand why that is a problem. He sees these as solutions to the problem, refusing to acknowledge that he may be a part of the problem.

I often get branded a feminist, almost always by men and never in an objective or factual manner. All manner of male chauvinists hang this label on me. The MCPs are easily spotted with their foaming-at-the-mouth tendencies. But the Bystander Chauvinist, he is the one whose words are accompanied by a rueful tone or a sneering glance. I won’t go so far to call it an insult. But it is meant to be a mild put-down, a slight diminutive.

This incidentally is also the man who proudly proclaims that he will never raise his hand on a woman, assuming that that is the very essence of feminism. He is accordingly judgemental of men who lose their tempers or are violent. When pushed (and only when pushed), he is likely to blurt out an unhappy, impatient, “But why should she be all helpless?”. There it comes – the deep-seated hint of resentment against women being able to claim sympathy for offences that he sees meted out to him as well. These offences look the same to him, so why, he reasons in his mind, does a woman have to get special treatment over a man? Only because he’s a nice guy.

The undertone is one of ‘It’s because I care’. I believe that he does genuinely care. But these actions do not support women, neither abolish the problem nor take a stand against it. And because of that, they undermine the confidence of women and their right to assert themselves. This is why this attitude is an offence.

The thing is, I do not have a personal vendetta against men, this kind or the rabid chauvinists. I only want my rights (respect, privacy, freedom). And I want justice when these rights are denied. It’s not fair to punish the man who has not actively denied me my rights. He just…hasn’t done anything to help me get them. He has been a passive bystander, which even the law understands as party to the crime. What’s most troubling is that I am not angry with this man. He is the best of his sex that is available to me. He does not mean me harm. He is a friend, a lover, a brother, a partner. I care about him too. And this makes it much harder for me to tell him that his behaviour is unacceptable.

I tread an equally uncomfortable, narrow path as this man. I’m the Passive Feminist, the counterpart to the Bystander Chauvinist. Like him, I don’t take a stand unless pushed. And then, like him, I react with misplaced anger and resentment. But perhaps in these uncomfortable exchanges, there is a little bit we teach each other – how to be gentle and firm at the same time, how to stand for ourselves and for each other both in one.

I live in hope. So does he. That’s why it exists.

3 thoughts on “The Bystander Chauvinist And Me”