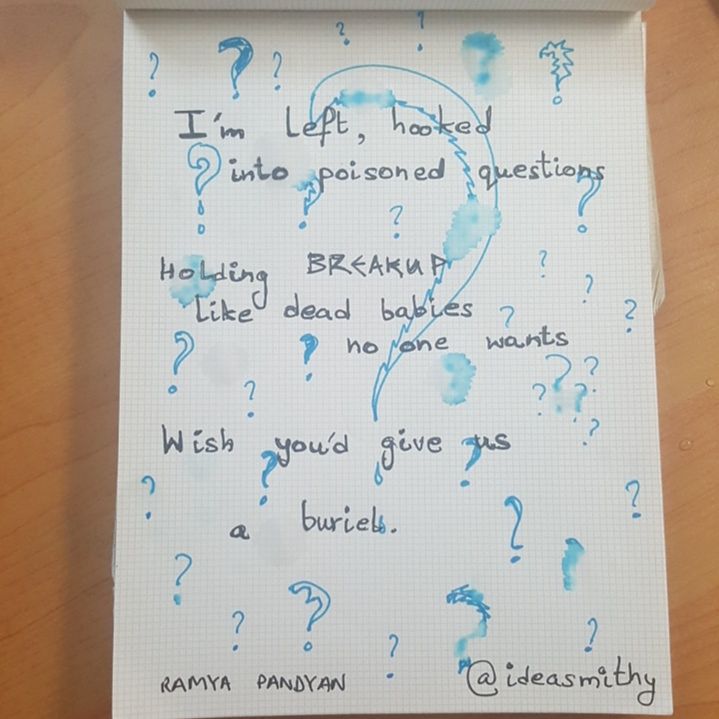 I was Youtube surfing when an 80s playlist came up with an Amrita Singh song. It made me want to read, listen, watch and know more about her relationship with Saif Ali Khan. And why not? I am an older woman who was in a committed (and what I thought for awhile, was loving) relationship with a younger man. I was an established professional in a field that he had just entered awhile earlier. And I had already achieved the things one tends to want and moved on to something else. These are the kind of things people usually wonder about when it comes to a relationship of this sort.

I’m finding this episode of Rendezvous with Simi Garewal rather interesting. It was shot in 1999, right in the middle of their relationship.

Amrita and Saif both talk about the concerns (expressed by everyone else) on Saif getting married at 21. Saif says,

That really struck a chord. I know my Mr.Everyday really, really did not want to fall in love, did not want a relationship and did not want to get married. But it happened. I didn’t push it, I truly didn’t. I was the one to say, let’s take some time to think about it. He was the one to suggest getting engaged if we were together in a year, the one to say let’s do this, the one to propose. At the worst of times between when we discussed marriage with our families and the time he actually proposed (eight months later), I held back my fears, my feelings because I thought he needed time. And I wanted to be sure that it came from him. Not out of ego but because I knew there was ample space for the relationship to turn into a bitter war of “You dragged me into this, you coerced me, you pushed me into commitment before I was ready.” He was the younger one after all and the man. These are things one comes to expect from men, from younger people and well, I recognized those behaviors from my own in my earlier years.

I wrote last week about missing respect in my recent relationships and realising that from meeting one man with whom I’ve had a happy, mutually respectful relationship. I’ve been told often that I get stuck in the past and that I refuse to move on. Maybe that’s true. But I am also realising that I’m the kind of person who needs to process and live through every drop of what happens, especially things as deep as relationships, in order to move on. Maybe the reason my relationship with that first boyfriend is so peaceful is because we acknowledged that there was affection (still is) and that there were differences and that it was best we transitioned from the relationship label we had (boyfriend-girlfriend) to a new one.

I think I keep boomeranging between extreme venom and tenderness towards Mr.Everyday because everything is unresolved. I know we had issues and the magnitude of many of them is overwhelming. But I have no real idea why it ended when it ended and how it ended. We have also not been able to have an adult resolution by which I mean, accepting that there was love and fondness once and it isn’t anymore. All I’m left with is a lot of ugly question marks.

Question marks can be ugly when they’re leering at you saying ‘He never really loved you’, ‘It was all just a joke to him’, ‘You suck; you’re a horrible person and men will always treat you that way’. Resolutions are important precisely because they give you and the other person the space, freedom and ability to lay those doubts to rest and move on. Else, there is just an endless echo chamber in your head which is always going to reflect back the nastiest memories and most brutal things you said and did to each other.

I learned recently that he is back in town and the thought hit me with absolute panic. Why? He is not a stalker. I do not want to be with him anymore so I can’t put it down to that nervous feeling of being near someone I haven’t gotten over. But I really don’t know how to behave when he’s around. Act normal? What is normal? I’ve smiled like a lovestruck idiot at him. I’ve thrown things across the room at him. I’ve argued politics, film, books and life with him. I’ve discussed grocery bills, medical expenses and maid problems with him. I’ve made love to him and I’ve fallen asleep next to him, before him, after him. I’ve cleaned him up and mopped up his puke after a drunken night (and he’s done the same for me). I’ve yelled and said and written angry things about him and to him. There is a staggering range of what constitutes ‘normal’ between us. Where is our new normal?

I don’t know and I am not able to find a satisfactory answer to that on my own. A healthy resolution really, really needs both people for it to happen. And this relationship, as with a number of other messy ones in the earlier past, has me left holding the baby. Only it’s an ugly, dead baby that neither of us wants and it died because neither of us wanted it. I just wish he’d do me the courtesy of giving it a proper burial. Ugly or otherwise, we created that together and it deserves a funeral.

4 thoughts on “I’m Looking For Our Normal, Mr. Everyday”