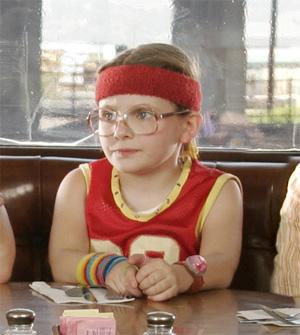 NOTE: An updated version of this appears later on the blog. If you haven’t read this story before, you might want to read that instead. It’s here: Sunshine Moment.

I was more than a little upset recently over being objectified…first as a sex object and then as a source of entertainment. It trivialized my existence, I thought. I actually thought, (as often before) of shutting this blog down since it seems to only make it easier for people to hurt me.

Then, this evening I saw the movie ‘Little Miss Sunshine’. For those of you haven’t seen it already, the reviews talk about it being a story of a dysfunctional American family. I disagree. I think it’s a story about kicking ass. A totally rocking old man and a completely adorable so totally cool and with-it little girl. Its the age of innocence and of wisdom untainted with cynicism. Its about rebellion not from anger but a sense of mischief. And it reminded me of another girl who kicked ass not so long ago.

It was 2001, the year of big dreams that came to nothing. Of a plane ramming into the Twin Towers bringing down a shower of bricks and employment dreams for the rest of us. Of the humiliation of having taken a chance that failed. And the entire farce of having to continue like nothing had happened, simply because there was no other choice.

It seemed to permeate into every aspect of life. I was nearing the end of the first semester. I’d taken a chance, quitting a fairly good first job to get a shot at the bigger corporate scene armed with an MBA. So what, I reasoned if it wasn’t from an IIM, I’d make it up along the way and I had no time to waste. 5 months down the line I wasn’t so sure anymore. Almost appropriately we were ‘class B’ of a batch that one of our potential employers described as a ‘not even tier 3 college’. We had been categorized by name but for whatever reason, I found myself sharing deskspace with the most lethargic bunch I’d known in a long time. Not my ideal clique I decided, but I’d improvise. The job scene that had seemed ‘challenging’ earlier looked fictitious now.

My individual attempts at running forward ended up in duds, strangely comical when I look back (much like the trials of the family in the movie). I’d organized and run for the class elections only to suffer a resounding defeat. 3 votes to 42 I discovered and a little later that my best friend was not one of those 3 and much, much later that she had sealed my fate with a carefully pronounced “That woman is power-hungry. Trust me, I’ve known her for 7 years.”

A little earlier I had also entered a singing contest in one of the inter-collegiate festivals. Surprisingly, I won. Not just a prize for the duet but also a special mention by the judge for my solo rendition. That spurred me on to try my hand at something I thought I might succeed in. And so I became a regular on the college festivals scene. I made a lot of friends, lost track of the number of events I represented my college in, and brought back a few certificates that would never help further my career but felt good to have anyway.

My more intellectually-inclined friends would occasionally attempt a case-study competition and scoff at my ‘wasting time’ on things like advertising slogan contests and music competitions. I stood firm (or stubborn, was it?) and insisted that the festivals were going to be fun for me and not yet another attempt to further my career.

But my luck was running out there too. After that first heady high of the first win, I seemed to keep hitting dead end. The ad-contests were easy enough as were the games but the big prize was the music competition….I was starting to think of myself as the college singer….and yet the prize was elusive. I was never booed off stage (ask me sometime about college audiences…..if you can survive one of those, I think you can practically survive anything…this is an audience that will rip you apart and hang up your carcass if you make the slightest slip). People sat through my renditions and clapped nicely but the prize-winner was always someone else.

I started to observe. There was always this one girl who kept beating me. She had a Runa Laila/Ila Arun esque voice and her repertoire ALWAYS was Mast Kalandar varied by Lambi Judaai. That was it, no one had ever heard her singing anything else. If you closed your eyes, it would sound like you were listening to the original.

But, I’d seethe silently, its supposed to be a contest among singers not tape recorders!!! Where’s the individual style, the creativity that one must expect from an artist? No one else thought so apparently and my much-wider repertoire went unappreciated. I had a new song for every contest (or two or three at least) but I’d always end up having to go over to congratulate her on yet another win. While she smirked back. No, she didn’t actually but allow me a brief moment of loser bitchiness…

A few months later, I knew it had all been in vain. I would never defeat her and the elusive Best Singer title would never be mine, no matter how hard I practiced or how well I sang. It was time for my own college festival. Even my classmates had given up expecting a win and I actually heard someone whisper, “At least if you lose this time, you can blame it on the college wanting to play good host and award it to someone else.” I think that was the final straw, someone else making excuses for my not-so-bad performance.

When I went up on stage, I was nervous, as always. Then I looked out at the crowd, the same one that sat through all my performances, they even had an idea of how long I’d take to overcome my anxiety and start singing. And then I belted out a song they’d never heard before. By prior agreement, my compere (also nemesis/friend from the other class) sauntered onto the stage and did a little jig behind my back adding to my performance and his own. By the time I reached the last note, every single member of the audience was up and dancing, I kid you not.

I ran back into the audience to a wildly enthused bunch of classmates cheering. That song went on to become the anthem of my batch. The ‘not even tier 3, not winning but having so much fun’ class B of 2003. And I realized I was one of them after all. Every time we met after that, every alumni meet, every single get-together, someone would request this song and we’d forget our ‘adult’ differences for that moment and just lose ourselves to the wild abandon of our own class anthem.

Incidently I never won a single prize for this song but every single time it got the same response. The audience enjoyed it as much as I did. A day after this festival, someone from the nearby pharmacy college stopped me on the road to congratulate me for ‘a really great performance’. In another college festival a few days later, as I walked off the stage, a lady stopped me. She had been one of my lecturers in under-graduate college. She asked me how I was and what I was doing there. I told her I’d just finished performing. She started laughing and said, “You know I was inside correcting papers when I heard this song. And I just had to come out and see the girl who had the gall to sing this on stage. When I saw you from the distance, I just knew it was you. No one else I know would have done that.”

There are words that hurt and haunt you all your life. And then there are words like this which you treasure always, because they make you so proud to be you. I finally understand why that song is so special. It was my Little Miss Sunshine moment. I kicked ass. And it felt good.

(I looked up Youtube for a video of this song but couldn’t find it. The song was Mungda Mungda from the 70s movie Inkaar. For those who don’t remember, this was a saucy bar dance performed by the original item girl of Bollywood – Helen)