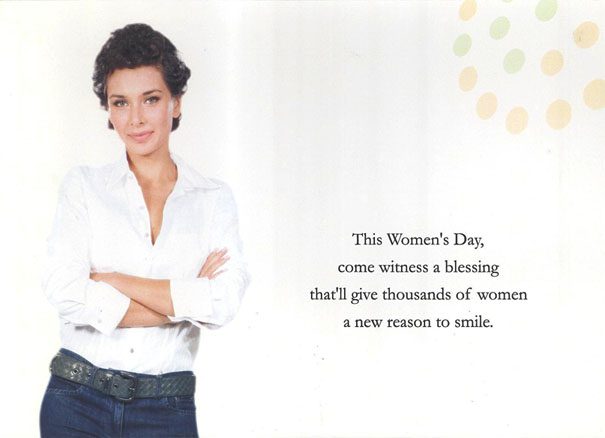 Earlier in the month, I was invited to an event at the Taj Mahal hotel by LifeCell International. They’d chosen Women’s Day to launch their new product – LifeCell Femme. My first thought when I heard the phrase ‘stem cell banking’ was the medical thrillers I used to read in college. I was pretty sure it had something to do with regrowing limbs and such in a petri dish, for accident victims. I had no idea what that had to do with Women’s Day or me, for that matter. I went along out of curiosity.

It turns out my basic perception was right. Stem cell regeneration is the technology that allows us to regrow certain parts of the body, using basic cells. Just thinking about it is awe-inspiring. Science tells us that each of us starts with one cell, that divides progressively into halves, quarters and so on. At some point of time, the collection of cells starts to resemble an actual human being.

How does a cell know that it is going to be part of the liver and not, say, a finger? How does a cell know that it should grow in this direction, not that? How do the cells know that they should bunch up in just this shape and not another? Mind-boggling, isn’t it? Imagine a few renegade cells in your right kidney had decided that left elbow was more their thing, instead? What a miracle the human body is then, that every single cell knows its own place and function!

This line of thought took me to memories of my grandfather and uncle. The first died of cancer of the urinary bladder, the second of stomach cancer. Two generations before them have died of cancer of various parts of the body. Medical opinions I’ve heard are divided over whether cancer is hereditary or not. All I know is that it has claimed a few lives in every generation of my family. I’ve seen reports, become thoroughly familiar with terms like oncology, carcinogen, malignant, benign and chemotherapy. The scariest part of cancer is that it isn’t a virus or germ. It’s not an outside element at all but your own body turning on itself. Cells inexplicably start growing in the wrong place, in the wrong manner. Cancer is when life goes haywire, literally and metaphorically. The reason chemotherapy is such a dreaded treatment is it is quite literally killing off cells, targeting the cancerous growth but obviously other cells would suffer too.

The concept of it and my own personal experiences make me choke up at the very though of Lisa Ray, whose journey through cancer and its treatment has been chronicled in recent times. Ms.Ray was at the event to launch the product and talk about her own experience with stem cell regeneration. She spoke about being diagnosed with a rare form of the disease that was normally found only in older people. Much to her good fortune, she said, her doctors also advised her to consider stem cell therapy, which ultimately was her return-to-life story. LifeCell couldn’t have chosen a more powerful ambassador for their cause.

LifeCell Femme involves potential stem cell therapy using menstrual blood (hence the name and the launch date). It was a revelation to me to know that what I thought of as waste discarded by my body every month, was actually still of use in some way! Even with my liberal upbringing, I always thought of menstrual discharge as dirty, unclean and in general, dead.

The presentation made me think of something else. Menstrual discharge is the disposal of materials created by the womb (uterus) in anticipation of fertilization. In a nutshell, it is preparing for a baby, creating it, storing it, supporting it, feeding it and carrying it through to term. An entire human being could have been created and maintained for nine months, from the material that flows out of me every month. It seems intuitive that the cells in that discharge would be the most powerful life-creating ones found in the body. Shock, awe and pride! Reading this in a science textbook is one thing, actually realizing it on a profound (dare I say, cellular?) level is a life-changing experience.

LifeCell’s proposition is to collect and bank menstrual blood for anticipated future use. The cells thus collected, have applications in the treatment of diabetes, heart disease, Parkinson’s disease, renal failure, lung failure and cancer to name a few. It’s like insuring your health (using cells instead of money) against future calamity.

The most interesting thing is that menstrual blood collection is a non-invasive process (which means the body does not have to be cut or surgically entered by a foreign object). It’s also non-intrusive, by which I mean that the customer can perform the collection all by herself and without any help needed or embarrassment faced. The way the product works is thus:

It is also advised to perform this procedure as early as possible in one’s lifespan as the younger the cells are, the more potent they are (potency being a measure of how many cells can be grown from one cell).

The Menstrual Blood Stem Cell banking service costs Rs.49,900 for preserving these cells upto the age of 60. The alternate plan offers a buying price of Rs.29,900 with an annual fee of Rs.1,500.

The ideal age for a customer is purported to be under 35. I am thinking about this seriously myself. What I would like to see happening is greater awareness of this science. No doctor I’ve known has ever talked about this, even though the technology has existed for over 50 years. LifeCell Femme’s involvement goes as far as collection and storage of the cells. It would be good to see the other end, i.e. – the actual applications tying in too. For example, a top-class healthcare facility would ask its patients if they have medical insurance. I’d like to see doctors also inquire if their patients have cell insurance. I’m not a medical professional myself and at the end of the day, I may not even know that a certain ailment has a possible cure in stem cell regeneration. But the future looks promising for LifeCell International and for stem cell therapy and hence I hope, for all of us.

Wish Me Happy Woman’s Day Today And Here’s Why