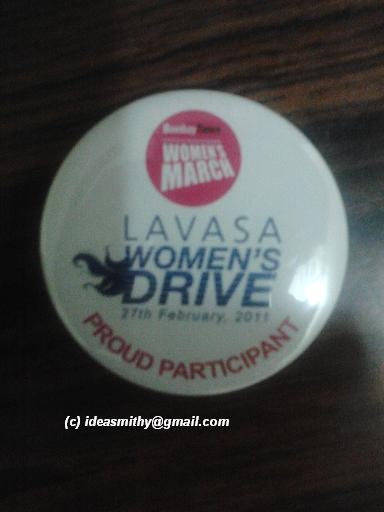 Travel. A weekend away from the city. Seven other interesting people. A time for many conversations and memories. Here are a few snippets from my Lavasa diary:

One thing that never occurred to me was that the participating rally cars themselves would be photo-ops. Most participants had decorated their cars, some representing their favorite causes. One car was brightly festooned in pink for girlpower. Here are a few of my favorites:

This team’s theme was water preservation to ensure a green world. The top of the car was richly decorated to depict a green, flourishing world, with what looked like real grass and shrubs and a blue-green planet Earth nestled at its center. The back of the car (which I unfortunately couldn’t catch on my camera) was painted a sandy brown and rust, a scene of desolation, dryness and death to show what our planet would come to, if we weren’t careful in our use of water. My picture doesn’t do this car justice. I think it was easily the most elaborate, eye-catching car in the rally.

The other car that caught my fancy was this one that came up, just a little later in the line. Promoting the cause of making this an easier, more convenient world for handicapped people, the car actually carried a wheelchair to its top. Take a look:

One thing marked a distinct change in the atmosphere at the Oriental Octopus. After the infamous Basa/Pasta exchange, here’s what transpired,

Shakti: (in a loud voice belying her tiny frame) I’ll review this, of course!!

Tada! Like magic, the waitresses and servers were swarming all around our table suddenly. Every second second (hee hee) was punctuated with a solicitous,

“Are you enjoying the food, ma’am?”

It might have worked if only there was food on the table to be enjoyed.

These ladies drove their car in this garb, to show their pride in their home state. Also, their car said, “Merchant Navy rocks”. A tribute of course to their husbands’ professions.

Monica: Look at those girls, they’ve changed yet again!

Me: *sniff in poor imitation of waitress* Never mind, attitude shows in your body language, no matter what you wear.

Shakti: But nobody is looking at us!

Talk To The Bust

Since the prime cause of this rally was breast cancer awareness, the heavy-handed focus would have been inevitable. But I was charmed by the cheeky and smart tee-shirt that this lady sported.

Quite appropriately the post-rally entertainment included a boy band, SQS Supastars. I giggled when they belted out ‘I will survive’. I’ve never heard a man sing that but the boys played on valiently and from the look of it, they were a big hit with the ladies. I was most amused to spot a sign for hair braiding right at the foot of the hip young man playing the guitar. I guess someone dumped it there and forgot about it. 😀

Potato chips are at Lavasa with a twist! Chipstix, a stall on the promenade slices a single potato into one unending swirl, fries it on a skewer and serves it up in a variety of interesting flavours (green chutney, salt n’ vinegar, barbeque chicken, pizza express).

The evening was pleasant and most of the rally crowd (including the dress-an-hour girls) had vanished. We walked around the promenade and ended up for coffee at Grandma’s, another eatery in the style of European pavement cafes. Amidst conversation I heard a loud crash. I jumped and I turned with a scream. I thought the man was holding a real woman with a broken leg!

The delightful Biswajit Dey was scheduled to leave for Mumbai right after the rally. But due to the mysterious workings of the universe he was detained and made to entertain and tolerate six opinionated, temperamental and excitable women. Naturally, he had no luggage with him. But did that deter our valient collective knight-in-red-armour?

He says he washed up his clothes in the night and dried them with the hairdryer in the wee hours of the morning, so as to be fresh and ready for the 6a.m. nature trail (which didn’t happen but that’s another story).

The Lavasa-Pune road would test the cast-ironest of stomachs. Winding roads, sharp curves, steep inclines are perfect ingredients to the travellers’ bane – motion sickness. Nisha was the first to succumb, standing by the side of the road while we waiting, watching guiltily (Why? Because we’re women. Other people’s troubles always make us feel guilty). Then Anu stepped out and she was standing next to Nisha in an accurate imitation.

I looked up from my nap (late Saturday night-early morning rally-madly early morning for non-trail, what do you expect?) and suddenly I was heaving out of the car too.

Four feet evenly spaced from each other (we’re women, we’re neat that way). I heard a loud snort and I wondered who would be mean enough to laugh. To my astonishment, it was Nisha, the forerunner of this puke-relay. Even as she held her stomach (in amusement or sickness, I don’t know), she gasped,

Someone should take photographs right now! What a sight we must make!

Kiran: (checking phone) What is this? Someone is featuring me on their Daily but I haven’t written anything big recently.

Monika: (peering at the screen) Umm…that’s just an app.

Kiran: Oh, you mean you haven’t specially featured me in your Daily?

Monika: (shuffling feet) Umm…I installed it ages ago and forgot about it. It’s….err…automated.

(All of us shuffling feet and looking away)

The best part of my Lavasa experience was the people I met. Anu, Monika, Kiran, Pushpa, Nisha, Shakti and Biswajit – you really made this a memorable weekend!