Skip to content
Business on Digital Pop Culture Roving I 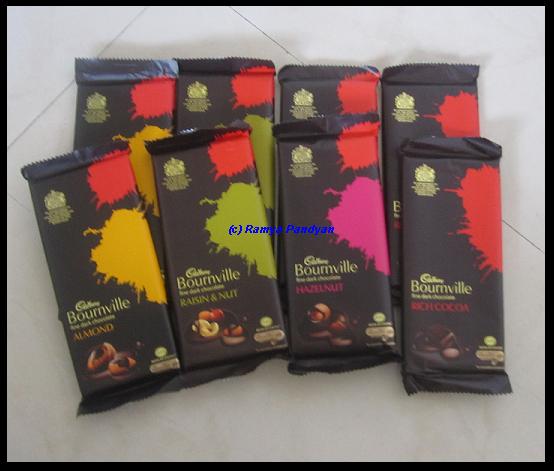 Two weeks ago, @Haveyouearnedit tweeted me asking if I’d organize a Dark Duet Party. Shortly after, I received the following email:

Hope you are doing well.

I just sent a tweet to you from the Cadbury Bournville Twitter ID about the Dark Chocolate Parties.

Would love for you to host a Dark Chocolate Party. The mechanics aren’t tricky at all:
– We’ll send across Bars of Bournville and Bottles of Wine to a location you identify where you’d like to host your friends.
– You need to let us know how many people you are hosting, we’ll plan the amount of bottles of Wine and Bars of Fine Darks accordingly

What we’d love from you:
– A couple of great pictures would be fantastic!

We’ve also got this Facebook Page which is pretty interactive – http://www.facebook.com/cadburybournville

Would love to know if you’d like to do anything with us on it. This of course we can look at later but just thought it might be mutually beneficial

Cadbury Bournville has 854,890 followers on the page as of this moment. It’s very good coverage.

There is no monetary expensive at all.
The dark chocolate & wine will all be provided for, I will get it across to you.

You can call just a few friends or anyone you please!

Share a couple of pictures! Call me for any doubts you have.

Looking forward to hearing from you.

(Signed off with a name and designation but no contact)

It sounded like fun so I agreed. I confirmed a date (Saturday, 24th Sept) and that I’d host around 7-8 people. I asked for details of the wine (type & quantity) so I’d be able to plan food & additional beverages, if necessary. I also wanted to know how the delivery or pick-up could be arranged. And I said I would write a blogpost about it afterward and also tweet during & after (but not before) the party. All of this was on email so I sent them my phone number in case we needed to talk.

This is the reply I received:

We’ll get the Bournville & Sula Wine delivered to you. We’ll be sending a mix of wines.

Note, there was no mention of the logistics, details about the supplies or contact information at their end shared. I didn’t think much of it as I trusted it would be taken care of and since I’d given them my end of the details. I sent them the address and reiterated my question about the logistics. The reply was,

I sent it to them (again!) and asked them for some kind of contact. There was no reply. This was Thursday, 22 Sept. Three days to go for the party and I had no idea how things were going to be delivered, when or how many and no way of getting in touch with them. Still, I waited.

There was no contact on Friday. On Saturday morning (the day of the party), I emailed them in the morning and there was no response. Then I tweeted them (DM and then a @ reply) – still no response.

@haveyouearnedit Kindly check your email/DM and get in touch asap.

By noon, I had had it and I began tweeting about what had happened.

Was asked to organize a Dark Duet Party today. Now @haveyouearnedit yet to get in touch abt promised wine & chocolates. WTF?

What’s the point of asking ppl to organize Dark Duet party with no wine or chocolates? #bournvillesuladarkduet @haveyouearnedit

Apparently I’m going to have a Dark Duet Party tonight with no dark duets. #

A number of people caught the tweet and responded sharing their experiences of the Dark Duet Party. One of them sent me a phone number I might be able to call. It turned out to belong to the same person who had contacted me.

When I called this person, I was told that ‘something had come up and it wouldn’t happen today but any date next week and we could do it’. Stunned, I told them that I had already organized the party and no one had even thought to inform me. The same response was parotted back that the party could happen anytime the next week. I was also informed that there had never been an occasion when Cadbury’s did not deliver the wine & chocolates. When I reminded them that I had not even been informed, it was simply brushed aside with ‘we were very busy and something came up but anytime next week’. I also reminded them that it had been up to me to track them down and that they had not even bothered to give me a contact. To this I was informed that ‘I don’t give out my number to anyone’. At this juncture I asked whether they understood how social media worked and I was told that, of course they did.

After hanging up, I cancelled my party and began tweeting about what had happened using the #bournvillesuladarkduet tag.

Social media at its worst.

#bournvillesuladarkduet asks me to org DarkDuetParty. Cancel & dont inform me. Now say ‘its not possible’.

What kind of a social media person cancels, neglects to tell the organizer & shrugs it off saying “Next time no prob”#bournvillesuladarkduet

Soon after the tweets, I received a call from the above person, crying. I was told that the wine would be delivered at personal expense to this person and begged to take my tweets down. The person on the line was so hysterical, I had to ask them to hang up and call them back in 10 minutes. I told them that I did not want the wine anymore and that I would not take down any tweets. A fresh bout of tears followed and I was hard-pressed to hold my ground. This is what I said,

“I am not advertising Cadbury’s. As a blogger, my role is to talk about my experiences as they are, not present one brand in the best light and ignore other things. This has happened and there is no reason for me to detract my words. Anything that happens from hereon is new but does not erase what happened earlier.”

At the end of our call, I suggested that this person speak to their team and/or client and figure out what they wanted to do. My Dark Duet party was off and I did not expect anything from them. Shortly later, I received another call. The person said that the team had talked it over and decided that what happened wasn’t right and they would like to give me the wine & chocolates. They also added that I was free to write about the experience as I saw fit.

The wine and chocolates were personally delivered by the same person. I have no idea whether it was on personal account or company expense but that is a matter between the employee & the organization, not involving me.

On Monday, 26 Sept, I received another call asking how the party had been and whether the wine had been adequate. And this was followed by another request to take the tweets down. I refused.

These are the details of the case as it happened. I see a number of other Dark Duet parties being organized. The people who responded when I first started, almost all spoke of decent experiences. So yes, I recognize that my experience may be a one-off. However it is my experience and the only one I have had, which has been far from satisfactory. Here are some of the things that bothered me:

1. I was asked to, in essence, partner with Cadbury’s Bournville for this one event, a Dark Duet party hosted by me. While I provided all the information I asked for, the same efficiency wasn’t reflected from their end. I had told my guests that it would be a Dark Duet party and then had to go through the embarrassment of canceling a few hours before the party, for no fault of mine.

2. Working together, whether on a one-time project or otherwise requires open communication at both ends. I provided my contact information and made myself available (twitter DM, email, phone number, address) but the same wasn’t forthcoming at their end.

3. Events do get rescheduled, things could understandably come up. But nobody informed me that the party had been canceled. Is that like the organizers cancelling an event and neglecting to tell their participants? Yes. And it’s also a host forgetting to tell the hostess that they aren’t going to be around. It was neglect of an unforgivable sort.

4. After I’d gone through the effort of tracking down the person, their response was shockingly blase and dismissive. Why would I even want to host a party with Cadbury’s again when they’d treated me so shoddily? It seemed appalling that I needed to remind everyone of the fact that they contacted me asking me to organize the Dark Duet party and not the other way round.

5. Tears and emotional scenes have to be at the very bottom of ways to handle difficult business situations. I mean, really? Do we need a lesson on professionalism here? Going beyond the individual, what does it say about the organizations that employ them (the agency as well as the client) that they put someone who breaks down, at the forefront of a problem?Social media can do what customer service promised but didn’t quite do – provide a human face & relationship to the brand. How much do you suppose I’m going to trust a brand with whom my only human interaction has been blubbering and tearful scenes?

What’s curious is the attitude of a social media agency towards a blogger. Social media is about people, about channeling their individual opinions into things that could aid business. It is not advertising. It’s information, it’s reputation and it is relationships. I had not had a twitter following, I don’t believe I would have even received a call back attempting (in whatever manner) to salvage the situation. Brand arrogance about one-off cases isn’t a new phenomenon. It’s just that the online social media makes it possible for one person to make a big enough deal about it that a brand might fear being affected. And eventually, it doesn’t matter to that one person what other people’s experiences have been, if their own has been bad. We form our perceptions based on our own experiences and this regrettably, was not a good one for me.

Sep 18, 2021 IdeaSmith
IdeART My Soulmate Is A Book Roving I