Skip to content
Citywatch Life in Digitalia Roving I 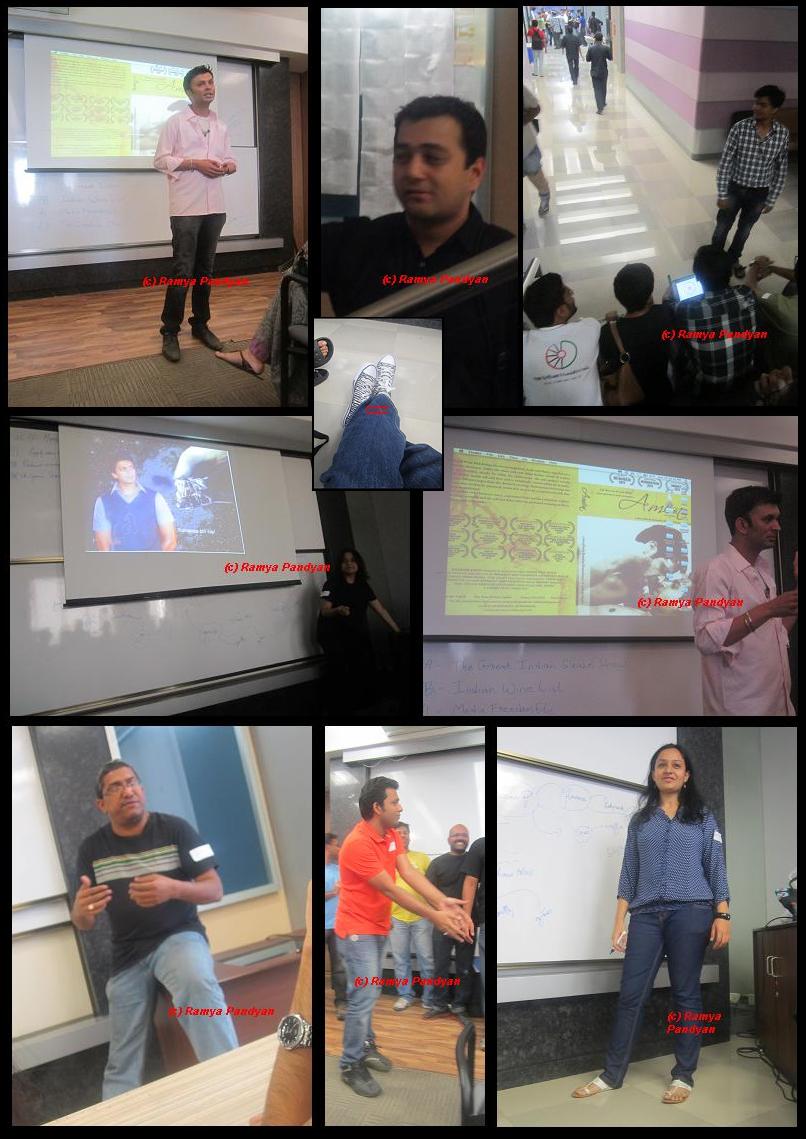 I spent yesterday at Barcamp Mumbai 8. This has been my first unconference in nearly 2 years. My last Barcamp was over 4years ago, overrun by techie discussions and only drew me because it had a teensy segment for bloggers. BlogCamp evolved as an offshoot of that.

Yesterday was a pleasant return. For one, the event that usually struggles on time, breezed through the multiple sessions, speakers and classrooms easily. There were 4 classrooms in the ultra-posh Mukesh Patel ….. The wiki was flowing with colourful post-its even at 10:15 a.m., which is when I got there. And most delightfully, the subjects spanned a diverse range of intellectual tools, hobbies & interests & scientific applications in fun real life ways. One had to be truly ruthless to pick sessions to attend since there were so many good ones, several happening simultaneously.

Off the top of my head, these are the ones I attended:

Interesting titbits from the day:

I entered Rehab’s session late, having misread the wiki schedule. It was interesting and fun, though occasionally highjacked by someone who claimed that genocide made him happy. Quick tip – if you’re demonstrating or talking without a powerpoint, avoid the big conference room. The larger crowd is harder to maintain & engage. Rehab did a great job though and showed off a mind technique that will help anyone from an artist to an executive stuck in a business dilemma.

Harrish is always entertaining and touching in equal parts. His first talk was about the film AMEN being denied a certificate by the censor board and he did a superb job of bringing out the inconsistencies in their policies. His second talk though, was the one that really had people talking. He was speaking of how gay people are treated in India, when partway through, he was interrupted by a very fervent member of the audience who insisted that,

“According to Hinduism, you can only have sex with your wife, inside a closed room. Only after marriage and only for procreation, not for fun.”

The uproar that followed had to be taken out into the corridor to make way for the next speaker. The episode illustrated one of the reasons that unconferences are a great way to seed ideas, bring out thoughts and get people talking, sometimes about controversial and difficult topics.

My session on ‘Social Content’ happened on the fly. It’s been years since I spoke completely extempore, as I did yesterday and it was a great experience. I was actually hoping to create interest for my upcoming series of blogging workshops, beginning with ‘Unboggle The Blog‘. But instead, I found myself naturally touching on several related but disjointed thoughts about this space. My 20 minute, stream-of-consciousness ramble imitated the way we consume and add to social content, on our Facebook Walls, our Twitter timelines and all out other channels of social media. I touched on the artificiality of traditional media, social media as an extension of normal, human behaviour, how trolls are mirror daily social miscreants experimenting in their own ways and that we’re all creators & consumers of social content. Here’s the talk:

I missed the #TWSS talk by Aditya Sengupta since the room was so packed that even the door couldn’t be opened. From what I hear, it was a tongue-in-geek demonstration of an algorithm used to generate and viral #TWSS (That’s what she said). But the geek in me found a corner in Anubha Bhat’s talk on diagnosing bipolar disorders using algorithms.

I’m not going to dwell on how great it was to catch up with old friends again, since that’s a given in any gathering. Yesterday was more than just friends catching up and people networking. It really was a meeting of minds, a true sharing of ideas. A big thank you to the Barcamp team for pulling off such a great day!

9 thoughts on “The BarCamp Mumbai 8 Round-Up”