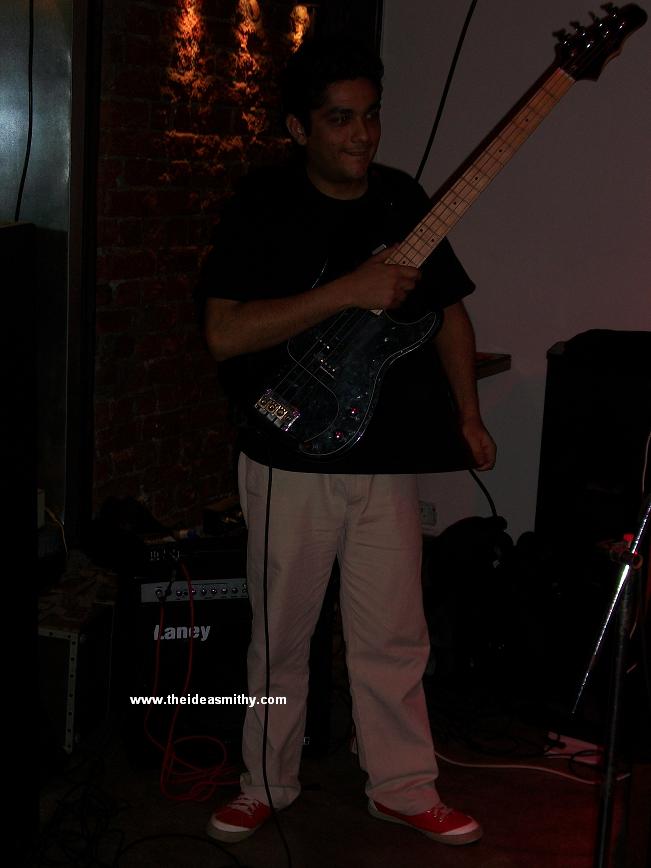 It feels like in this time-starved city, it’s hard enough to fit in one interest (I have two) along with a career, family life, social life and love life. One prioritizes so I picked books & writing while a lot of other wonderful things got left behind. But every now and then you run into one of them and it’s like meeting someone you believed you could be in love with if there had only been the time.

I have never really been a part of the music scene barring the occasional Roger Waters or Mark Knopfler concert (okay, okay Bryan Adams as well…sheesh..). But that’s stuff that EVERYONE in this city does, it’s practically a ritual. But to truly enjoy something, you need to be able to experience as many variations of its existence as possible and not just the well-marketed ones. So I jumped at the opportunity to check into the music scene.

I was at Zenzi Mills last night with Swati and Sumanth for a gig by three bands – The Mavyns, Sridhar/Thayil and Medusa. I was there courtesy my friend AmZ who plays bass with Sridhar/Thayil. The event was to launch Stupid Stupid Stupid, an album compilation of various young and upcoming Indian musicians including the three bands that played. I got there too late for The Mavyns and didn’t catch much of Medusa so I’ll focus on Sridhar/Thayil since I was there through their entire performance.

Last month I was at Airport‘s gig at Il Terrazo, Del Italia and throughly enjoyed myself. AmZ did say that this band’s sound was a little different. Now comparisons may be odious but they form the framework of how we relate to experiences in our mind. I liked Airport‘s songs because they were sweet and easy to relate to. This may have been because they were in Hindi and had a pop-feel to them, with familiar melodies.

Sridhar/Thayil on the other hand, has a very different feel. Jeet Thayil was unavailable so Vinay Lobo (guitarist with Airport) filled in with Amit Ahuja (AmZ) was on the bass. Suman Sridhar, the vocalist makes an art of her performance, using her very expressive eyes and hands. Her girl-woman demeanor adds to her delicate, flute-like voice. The sound was new, the music took awhile to register and I had to concentrate hard to be able to follow the rhythm. When AmZ asked me later what I thought, all I could say was,

which I realised after I said it may not have sounded very complimentary. What I really meant was that I needed time to figure out how I felt about it. I think this is true of all art. There is what you are familiar with and that generally appeals immediately. In music specifically, the language, the accent, instruments, voice intonations are all things that we respond to first out of familiarity and only later from real appreciation. A difference in any of these needs some realignment.

Musicians say that there is music all around us. There certainly is, unless you live inside a vaccuum. There’s cacophony which can become a sort of music once you figure out the rhythm and get used to it. But till that time, it is alien sound. So I guess I was listening to a lot of alien sound yesterday. I did listen to the song on the album again today and it sounds a lot better.

Among last night’s repertoire, I particularly liked ‘The Drowning Song’ (which is incidentally their song on the Stupid Stupid Stupid album). Anushka from Noush Like Sploosh (‘3 Act Circus’ on the album) chipped in with her Jewish harp, a curious little instrument that’s barely visible unless you look closely, else it just looks like the musician is strumming her own mouth. The resulting effect was like the sound of raindrops and water splashing. This is a sound I’ve heard before on Indian classical music albums and liked. It’s intensely peaceful and yet powerful at the same time. ‘The Drowning Song’ does overcome you with its watery feel.

‘Punk Bhajan’ was another song that caught my attention. As the name suggests, it was a fusion of Indian classical music with a more western sound in the background. This was really the song that told me that Suman’s voice could encompass a broad range of notes as she took the dips and highs of the bhajan smoothly. The only downside for me was that given her high-pitched voice, there were times it came off sounding shrill. Yet, I guess that is the style that she and the band are experimenting with and it was good to see her able to take the notes without slipping off tune.

An important aspect of the entire show was that the venue and sound set up were rather less than acceptable. The gig happened on the upper storey of Zenzi Mills, with a salsa meet in progress on the floor below. If one stood near the door, the strains of salsa were rather louder than the music in the room. Why would you stand near the door, do you wonder? Because up close to the musicians, the sound seemed to be ricocheting off the roof and walls in a funny way. I could hear each piece separately and by the time I put them together in my head, it was too late to enjoy the song. All the songs sounded much better at the back of the room…when you could hear them undiluted by salsa.

I also spotted Dischordion‘s Garreth D’mello. He wasn’t performing but contributes ‘The Old Whore’ to the album. The song has a happy-go-lucky vibe, the title notwithstanding. Incidentally my friends who’ve seen Garreth perform in the past few years describe him as a real rockstar on stage with the whole ripping-teeshirt-off bit. So you can imagine my surprise when I watched him stick to his barstool all through his performance at Blue Frog last year. The sound is easygoing and smooth too, not the gritty screaming you’d expect from a teeshirt-ripper. He sounds good and finally I guess that’s what makes a real rockstar. 🙂

On a snide aside, I stepped out for a break and took a walk around the compound. And here’s what I spotted. (For the non-Marathi-reading people, that spells ‘Prog’ not Frog. But it may be argued that Blue Frog is a quirky enough name so a Blue Prog is probably just an extension to that!) 😉

On the Stupid Stupid Stupid album that I’ve been listening to all morning, 21 tracks vie for my attention. The Mavyns bring ‘Freedomslinger’ while Medusa does ‘March’. Constellation Project‘s ‘Ring the bell’ is playing right now and it reminds me vaguely of Dido though I know the music sounds entirely different as does the accent. I’m quite liking the whistling interludes in the song. ‘Freedomslinger’ similarly reminds me of The Eagles ‘Get over it’. Khiladi‘s ‘This is Sparta’ starts with the ceremonial Maratha trumpets that sound at the start of any celebration…and transcends into a sort of passionate rap-conversation. It’s fun.

Incidentally, Stupid Ditties 3 is available for download. It is a mixed bag, with different kinds of voices and sounds. I see nothing in common to all of them except that they’re all young and newish. Which suits me fine considering that also describes my foray into music.