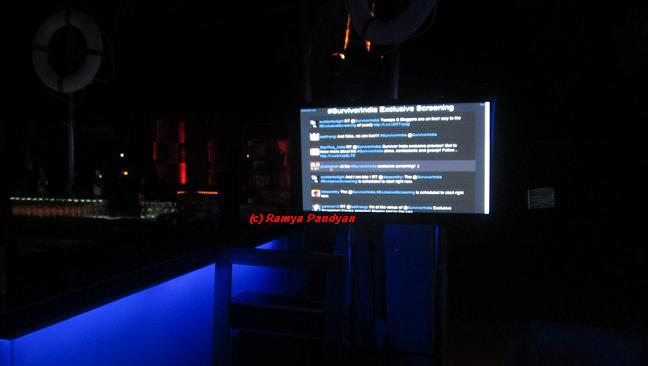 I was at the SurvivorIndia launch party last Friday at Vie Lounge. We started with a welcome drink, a nariyal paani served up by a pretty girl in Hawaian-style clothing. It was a blogger/tweeter event so they had a live display of all tweets with #SurvivorIndia. I was live-tweeting and twitpic’ing through the entire evening (pictures later in this post).

I want to make a note of the fact that the event, scheduled to start at 7:30p.m. actually began only

at 9.30p.m. The delay was because some of the participants had not turned up. I spotted Shilpa Agnihotri (of Kyunki Saans Bhi Kabhi Bahu Thi) & Rajesh Khera (Jassi Jaisi Koi Nahin) very early on in the evening and my guess is they’re probably the biggest stars on this show. Payal Rohatgi, on the other hand, only turned up very late (after which the event promptly began). I’m not amused by such affectations and in case it needs to be stated, it’ll probably not win any viewer support either. As it was, I left at 10.20, having sat through the preview screening and without being able to attend the question-and-answer session. Bloggers & media people have lives too and Friday nights are not for any starlet to steal.

I didn’t have much else to do for 2 hours except shoot random pictures and tweet. Here are some of my spottings:

The show takes place on a remote island in the Philippines where the participants (called Survivors) will have no access to even basic amenities and will have to fend for themselves. The teams will also vote out people during the show, which means each member has to survive the elements and also human dynamics.

Survivor India will air on Star Plus from 6th January, 2012 at 9pm.