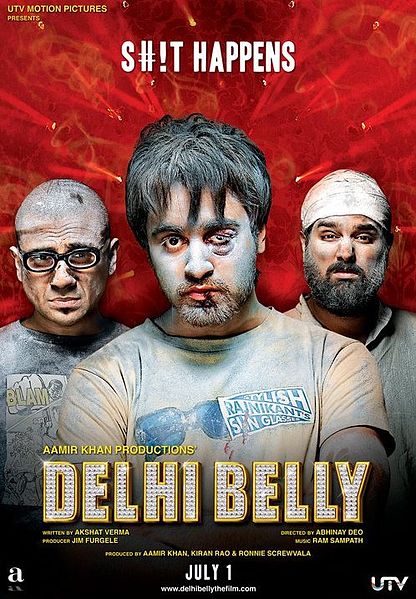 Over-promising and underwhelming describes much of Bollywood in the past couple of years for me. But I still hang on, regardless. There have been a few nuggets after all, the films that slipped in when you were watching out for the high rollers parade. And then there is the mystery man. The only time I remember feeling let down by him was Ghajini. But then, if the figures are to be believed, most of the country doesn’t share my opinion.

Delhi Belly is probably the next most awaited movie, what with nephew Imran Khan’s makeover

from sweet-boy-next-door to hellraiser. I can’t tell if the controversial DK Bose song is just a publicity gimmick or not since the lyrics don’t make any sense to me (Papa mujhse bola, tu galti hain meri, sabun ki shakal mein, beta tu toh diklake woh jhag???). Just in case you’re the last person in the world to *not* have caught the drift, try saying the name of this song over and over again as they do in the video.

The gossip section of today’s newspaper reports that ‘a bitchy actress’ has leaked the news that a shit sample meant for the doctor gets interchanged with a box of diamonds in the movie. That made me gag for all the usual reasons including what seems like an obviously paid-for-PR attempt.

I just caught something rather unusual on the tube now. Aamir Khan walked into the middle of a blank white screen talking about the fact that his next project uses certain language (cue eyebrows raised, embarassed, shifty look). And I wondered if he was going to clarify that it wasn’t intended to offend or whether it was just referring to a certain Bengali name. Instead, the Khan proceeded to say that this film was not for children and *wait for it* people who…umm…are boring stick-in-the-muds! The three hellraisers in the video, including Imran Khan bounded into the frame, well…raising hell. The chaos ended with Aamir Khan telling them to shut the **** up.

‘SHIT HAPPENS’ flashes across the screen. Cut to a racy trailer of Delhi Belly. Gimmick or not, I am so looking forward to this movie.

9 thoughts on “Shit, DK Bose & Delhi Belly: Are Surprises Good For The Stomach?”