Skip to content
Chronic Thinker Diary of a Writer Roving I 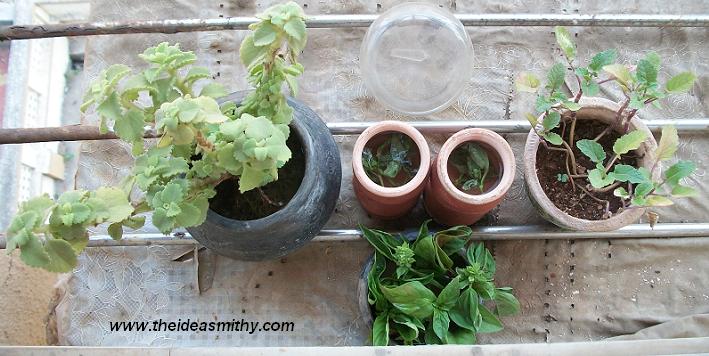 A photo Reverb10 post! It makes for a nice change. Also, it calls to the old challenge in me about trying to say something with a picture instead of words, of playing peek-a-boo with my readers by showing them something that is me and yet not instantly recognizable until it is explained.

December 25 – Photo – a present to yourself

Sift through all the photos of you from the past year. Choose one that best captures you; either who you are, or who you strive to be. Find the shot of you that is worth a thousand words. Share the image, who shot it, where, and what it best reveals about you.

Say hello to my window garden. Does it seem odd to you that I would introduce my plants to you? Pet-owners do that all the time and if you ask me, animals are a darned bigger nuisance.

Late last year, the doctor down the road was having his clinic renovated. I’d drop in for papers and he’d chat. One time he pointed to a green plant close to his table and complained about a patient who had asked for it but never came by to pick it up. I must have looked interested, because, without asking me, he clipped off a branch and handed it to me, asking me to put it in a little water.

I took it home, cradling the thick, fleshy green stem with its stiff leaves, in my hands. And instead of a glass of water, I took an old clay pot I’d saved from somewhere and filled it with mud. Then I stuck the stem into it and gave it some water.

A couple of days later, the leaves were still green so I continued to water the plant. I was up most nights and on my breaks from reading or writing or when I was on the phone, I’d sit at my window, sometimes putting my feet out of the window and resting them on the airconditioner. I nearly knocked over the plant a couple of times. In time, I shifted to a window-chair and got into the habit of stroking the leaves. I always liked the spicy, snappy smell it left on my fingers.

A few weeks later, I thought my ajwain plant looked lonely so I brought in a few mustard and jeera seeds in another old pot to keep it company. The mustard shot out almost immediately, with daily watering. The jeera never took. Mustard I’m afraid lived a very brief but dramatic life. It would look droopy just like a bent old man, in the morning. After I watered it, a mere half hour later, it would up and about, gadding with the other plant and flirting with the sun. And by evening, it would change colour to a yellowish-green. It died out in a few months.

I experimented with cooking, with lessons I had learnt off the internet (which even brought me this writing commission). I fell in love with another plant called basil (a distant cousin of the more familiar tulsi). I couldn’t find the plant anywhere. Even the plant-sellers who wheeled their wares past my colony gate each week couldn’t help me. Somehow I didn’t care for the blooms and petals in their colourful stock. I wanted only green things, edible things, plants that could integrate with me someday, through fragrance and food.

Finally, I picked up a packet of pesto leaves in the supermarket, ostensibly for yet another pesto-treat. But I picked out the freshest looking sprig and planted it. It actually took! Within a week, it was glowing a greener green than I’d seen in the supermarket. In a fortnight, it had shot out flowers. In over a month, the stalk had visibly grown. More basil plants followed with future pesto-menus. One restaurant gave me a packet of seeds as a special giveaway with the bill. And they turned out to be the elusive basil seeds. Not all of them took but I nurtured the ones that did, with pride.

At its prime, my garden had ajwain, mustard and basil all in flower and which could give at least 3 leaves each to flavour my fingers and my food. I rarely cooked with my plants. They never seemed big enough to cut. And in time the leaves would wither away and I’d clean them off, promising to cut the next batch that came up. Eventually my basil plants withered away took, leaving only tall brown stalks. I still water them, hoping that a magical little green leaf with show up suddenly.

I’ve discovered something magical with this garden. There is nothing quite like watching life grow, right under your care, in front of your very eyes. I’m not an animal person so pets are out of the question. People come with their own set of issues and norms and barriers. But plants, plants never let you down. They ask for so little – some water, some air, some sunshine and if you have it (I really do believe this), a little love.

I’m not one of those crazy women who ‘talks’ to her plants. But I do spend time with my garden, as tiny as it is, every single day. It’s the first thing I look at, when I get out of bed in the morning and the last thing that I see before I turn in for the night. When I’m back from a short trip or even a daytime visit, it’s the first thing that I go and check on. Even when I take a break, I like going out to look at my plants. Occasionally I touch them, stroke a shoot, pick out a yellowing leaf from the mud, angle the pot a little better towards the sunlight or just sigh in smiling satisfaction.

I really love my garden. It’s shown me a different side to myself. A side that can care and nurture without feeling the effort. A side that takes take great pride in something that means so little to anyone else in the world. I feel like the garden represents a new aspect of me that I had never known existed, before. A city girl who always lived in concrete and metal structures….and I’m a green-thumbed gardener! Who’d have thought?

Someday I would like to have a living space big enough to accomodate a garden I can walk around in. I’ll want to grow basil (of course), tulsi, jasmine, rose, tomatoes, lemons and the plant that started it all for me – ajwain (in the picture, it’s the plant on the extreme left).

Aug 31, 2021 IdeaSmith
IdeART My Soulmate Is A Book Roving I