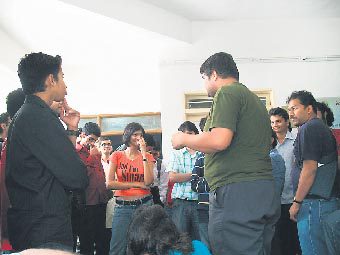 I’m just back from Pune Blogcamp2. My weekend began at 4:30am, being woken up by Astra who got the timings wrong by an hour. I grunted and went back to sleep only to get up and rush out half an hour later. Emboldened by the hour, I walked up to a bunch of guys standing on the kerb and asked, ‘Blogcamp?’ They looked at me blankly (no, that’s not true…they looked hungry and interested…tch, boys). Then one asked, ‘Where are you going?’. I said, ‘Pune’. To which he burst into a wide grin and said, ‘We’re not going to Pune but can if you want.’ Idiot.

Anyway, we found @sensonize and @farrhad standing across the road and not at all angry with us for our 45-minute delay. How sweet, they’re learning early. After a pretty comfortable ride down the expressway, away from Mumbai’s dirty grey weather, we were in Pune. Even the air tasted delicious!

I thought the Punekers were a much better behaved lot than the Mumbai junta at BlogCamps. I mean, no one shouted, no one got into any arguments, no one sniggered vilely and even the tweet-bitching was absent. Okay, I tried to add to the last but I since my recently buffed-up pal isn’t on Twitter, it lost its tang. Incidentally, the twitter hashtag to check is #blogcamppune which methinx was a tad too long (bcp would do just as well for next time) but thanks, Tarun for unorganizing it and inviting me too!

Meetu got BlogCamp to a promising start with a talk on niche blogging. In my opinion (and hers too!), WOGMA‘s success really comes from the fact that Meetu is truly passionate about what she does, not because it is marketed well. Not all of us can find a niche but if one of you does, Meetu is your poster-child.

This was followed by a number of discussion on the big, heavies of the ‘how to make money online’ variety. Sue me but I think these belong to Barcamp or perhaps, Startup Saturday (if they’re innovative), not BlogCamp. But then again, I’m just the voice of a poor, penniless personal blogger.

I really liked Aditya Marathe‘s session comparing Blogspot to WordPress. He also had some cool (non-geeky) analysis on hit spikes and visitor profiles. This was through lunch and a number of people may have missed it but it was worth a dekko.

The Kabras were obviously in charge of revving up things since Navin kicked off the second half of BlogCamp with an intriguingly titled ‘300 years of blogging’. Among some of the interesting things he mentioned, he suggested tracking Google Alerts on keywords relevant to one’s blog to keep up-to-date on the topic and also for story ideas. That’s exactly the kind of idea that you look forward to hearing when you meet other bloggers. It’s simple, easy and workable.

This was followed by Sandeep Gautam who runs a science blog. Tech-blogs I’ve seen galore but this is the first time I’m hearing of a science blog. What’s really interesting is that while this is a niche area, it provides relevant, incisive analysis to its interested audience. One big difference between such a blog and the regular personal blogs is that the former is factual, written in a reporting style, akin to a journal which provides an objective look at current trends while the latter are purely subjective, based on perception and (in some cases), not supported by facts. I daresay the session came across as rather heavy but in retrospect, it was good to have been able to sit through it because of the quality of his content.

By this time, the post-lunch somna was setting in and the Mumbaiker restlessness asserting itself. With some egging on, Thakker was persuaded to take the stage. Since the rooms were both busy, he took his session out onto the staircase and would you believe – some 80% of the audience followed him! For an hour, our man held forth on the woes of a geek’s life, his (mis)adventures with dating and matrimonial matches and photography.

We ended BlogCampPune2 at the cafe next door with chai and bun-maska. The evening was fruitfully spent savouring Meetu‘s bhajia spread at the Kabras’ residence (which requires a map – not to get there but to get around within). At 8pm we got going…no, not to turn in but to the beer tweet-up. The beer brewery is part of The Corinthians, a club/lounge bar/hotel on the outskirts of Pune. The sweet, really sweet part of the occasion was the free, freshly brewed beer on tap.

I tried and liked a wheat-flavoured beer, which tasted more like a nice fruit juice than alcohol. As the beer went down, the jokes began to come up. Not the intelligent ones that (usually) intelligent, evolved people make but the ones that can only be categorized as PJs. Here’s a sample:

Amidst elephant-homicide discussions, one of the guys started telling me a story about Eval Conneval (I hope I got that spelling right). When I inquired who he was talking about, he yelped,

Don’t you know the greatest motorcycle stuntman of all time??!!

When I protested, I was accused on being a bonafide girl-geek. I am most certainly not. I mean I get some of the geek jokes but I am not, not, not a girl-geek!!! For the uninitiated, girl-geeks are even lower on the social scale of geeks, than the geeks themselves (a rating of about minus forty-five). Hmph, just you wait, Mr.X (protected to ensure privacy from boy-geek-big-brother), I’ll see you at XXFactor!

This morning I woke up to a full-of-naughty-beans Rabad saying it was time to wake up and how long was aunty intending to sleep? Pune Mirror had a story titled ‘Fourplay at BlogCamp‘ illustrated by a photograph of the event, my bright red tee-shirt clearly visible in the very center of the pic. Bleh, even a girl-geek is just accessorial (men, I tell ya!!!). But the lovely Pune weather must have made me a Punekar too since I didn’t feel like grrrrring about it. (This post was written after I got back to Mumbai, good ol’ irritable Mumbai!).

As the toll-naka approached, I felt the surreal magic of Pune slip away from me as easily as the clouds surrounding us at the ghats vaporized. It’s a sticky, warm night and the rain is pelting down incessantly outside my window. I’ve been woken at an ungodly hour, endured cheesy pick-up lines at 6am, been called a girl-geek and been inducted into an elephant-homicide cult. But Pune is a mere 3 hours away and Meetu and Navin are each a phone number and tweet away. It was a glorious weekend, guys, thank you so much!!
After much dawdling over chai, ek aur chai and breakfast-nahin-pahije-na? Sunday morning, we went out to ‘yewdhe lambh!’ Flag’s for lunch. Full awesomeness happening, I thought to myself over a Turkish moussakka, Italian crosstinis, lasagne and pasta. Then we ambled over to the taxi stand and I rode back home.