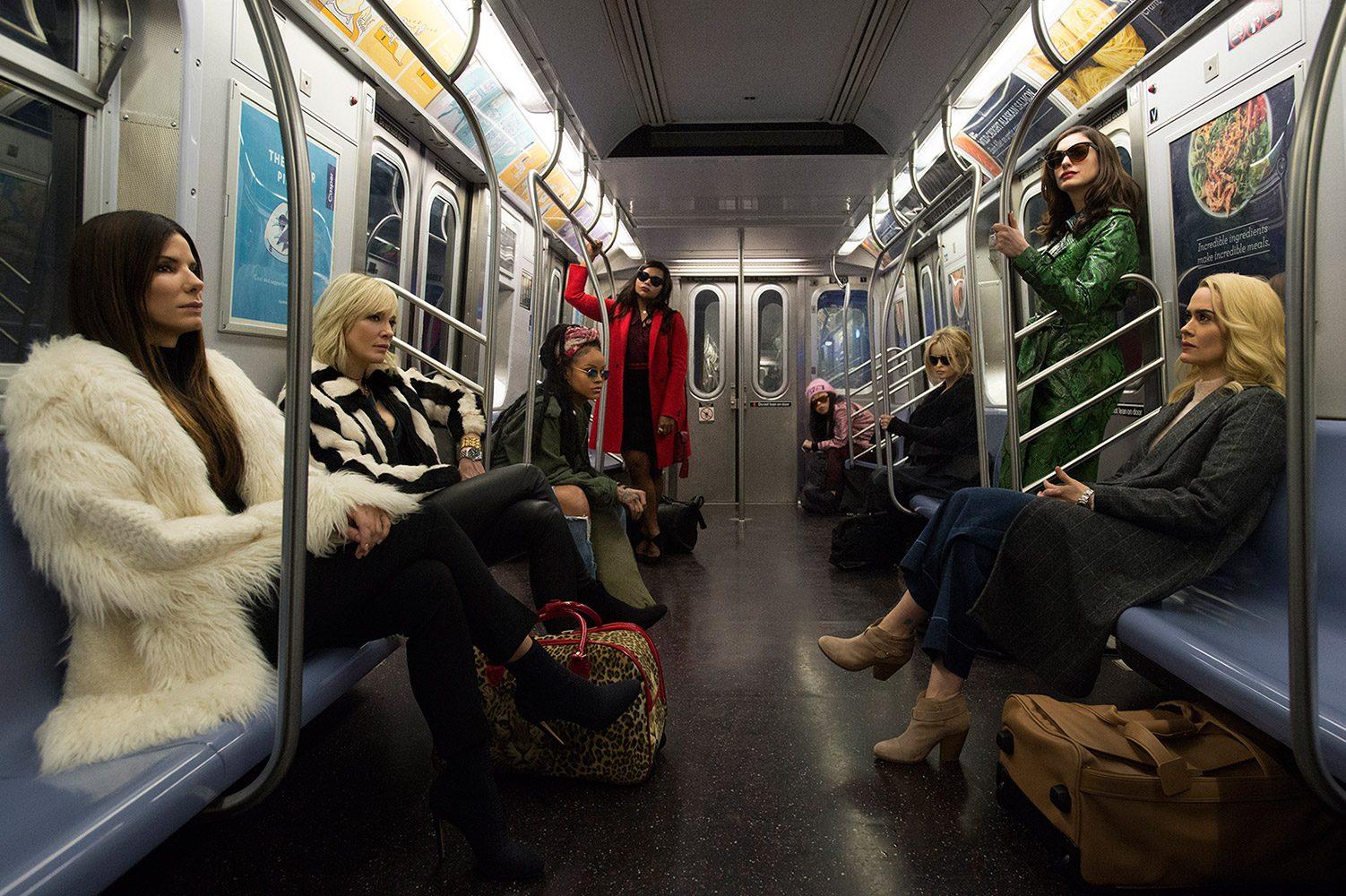 The Ocean franchise is what I like to think of as Smooth Masculine (but still very masculine) — a format popularized by the early James Bonds. They’re stylish and suave. They actually talk, even intimidate, with words rather than their fists. In itself, this digresses from the usual toxic masculine image of an overmuscled, underarticulate (only they call it ‘brooding’) male. Hey, they even show the main leads crying. The Ocean series is also about male bonding, another digression from the antisocial guy, his social ineptitude glamorized as ‘lone wolf’.

Now we have an all-woman spin on the Smooth Masculine. Is that enough to make it feminist?

Let’s start with the plot. The Ocean’s trilogy was respectively about robbing a supersafe, racing to steal a Faberge egg and breaking a casino. Admittedly the first is also about Danny Ocean showing up his rival in love in a schoolboyish fashion but that is a joke underlining the slickness of the operation. All three movies are about cracking a joke at the expense of some guy who eventually lands on his butt. Every plot is a game with an emphasis on fun and some snazzy lines thrown in. The Ocean trilogy isbuilt on the foundation of Danny Ocean and Rusty’s read-your-mind camaraderie and infused with inside joke humour.

And now let’s take a look at what the girls get. There are just 8 women which made me hope there was going to be a line about 8 women being able to do the job of 11 men or about the wage difference. Nope.

Are they having fun? I’m a woman and I’d be hard-pressed to call what they’re doing fun. Shopping, wearing pretty clothes and ogling a shiny necklace — nope, assuming that’s what women bond over is pretty sexist. Which brings us to the object of the plot. Danny’s boys took on casinos and museums, the money and objects themselves of scant interest. It was the thrill of adventure that drove those plotlines. In comparison Debbie’s girls string along listlessly with motivations as flimsy as money, to chase the most clichéd object in the history of women’s desires — jewelry. So far Ocean’s 8 is already lagging behind than the three male dominated movies on story.

Speaking of listless, the movie boasts a starcast even glitzier than the original Ocean trilogy. But only Sandra Bullock and Cate Blanchette have any kind of meat in their roles (and even then, I’d call this a low-fat chicken broth compared to the prime ribs that George Clooney and Brad Pitt got). We know the women were partners earlier and that they team up on this. But beyond that, the two characters are pretty much interchangeable as pissed-off (and entitled) white women through the story. Ocean’s 8’s female characters also have worse roles than their male counterparts in the preceding trilogy.

Speaking of white women, much has been made about Anne Hathaway’s self-referential humour but no, it wasn’t that interesting. Neither was her abrupt about-face at the end of the movie. A hot filmstar joins a bunch of crooks because she wants friends? Sounds flimsy. Helena Bonham Carter is (yet another) wasted talent in the film. It takes no mean talent to act like you’re a bad actor and that’s the extent of her prowess on display in the film.

Rihanna, the queen of inclusivity and the MET ball, shows up in a grungy avatar as the genius geek. But her tech wizardry extends to making the apartment’s lights flicker on and off and hacking into the museum’s security cameras. This does not impress anyone who grew up among teenagers hacking into government systems. What’s more, her ‘wizardry’ has to be supplemented by lame things like angling cameras to blind spots. This is accomplished by tricking a sad-faced old man with a bogus site about puppies (culled from his Facebook feed). Women and technology = Facebook stalking + clueless old people? Compare this to with the hologram of Ocean’s Twelve and the magnetron of Ocean’s Thirteen. This feels like a comment on women’s supposed ineptitude with technology. Or maybe, just lazy writing. Count one for Ocean’s 8’s misogynist subtext.

Mindy Kaling, another POC star is introduced inside a shop that looks like a parody of Bollywood — flimsy fabrics, garish designs and an atrocious Hindi accent, arguing with a similarly parodic mother (slightly less atrocious accent). Her only contribution to the heist is to blend in with the kitchen wash staff and then break the necklace up, in the toilet. I imagine she’s supposed to be the girls’ version of Virgil-and-Turk but she doesn’t have any of the lines or even the situations to add comedic timing. As an Indian, I can’t help feeling she’s this movie’s version of Anil Kapoor in Mission Impossible: Ghost Protocol — The token brown fool. Add whitewashing & racism to Ocean’s 8‘s troublesome nature.

There is another token Asian who is a pickpocket but as with Rihanna, her part in the heist has to do with a lot of convenient coincidences and other people acting in stupid ways. I thought she might have been a replacement for The Amazing Yen but no, he shows up in a throwback to every dance-through-laser-beams sequence ever (including Toulour in Ocean’s Twelve). Could the makers really not find a female acrobat/contortionist? Even the snazzy action sequences of Ocean’s Eleven’s lift climb are missing.

Okay, so may be the last three points are more about racial inequality than feminism. Maybe not. Feminism like any ideology, is evolving. This movie may have been impressive in the 90s when a film with no brand-name male stars would have been inconceivable. But 2018’s feminism is intersectional. These glaring instances of tokenism run alongside casual racism — in one scene, Cate Blanchette tells a full-mouth chewing Sandra Bullock (when did Debbie Ocean become Gracie Hart?) “I don’t speak Ukaranian”.

Sarah Paulson, arguably a smaller star than Rihanna, still gets a bigger role showcasing the soccer mom/illegal goods fence. This is probably the least cardboard character but is exploited for very little nuance or humour.

No one in this movie is suave or smooth. Perhaps that’s a feminist statement about women not needing to be these things (but I’m really scraping the bottom of the barrel for salvation here). I won’t bother going into the utterly unnecessary nasty ex subplot. Then, I want to know, where’s the movie?

I didn’t get the great lines that made the Ocean’s trilogy such a delight to watch. I didn’t see any fantastic female bonding. I missed the cool gadget wizardry and tech tricks. I didn’t spot any fun action scenes. And I sure as well didn’t enjoy watching talented women grimacing their way through such hackneyed, restricting roles. Even the necklace wasn’t that pretty.

So let’s do a feminism round-up.

Intersectional? Not. If this movie were based on an actual story, it would probably involve whitewashing.

Aspirational female characters? Nope. Every character is replaceable, barely propping the other up or surviving because men slipped up. Add incorrect messages about ‘feminism = male-bashing’.

Breaking stereotypes? Uh, no. I’m looking at you, jewelry chasers, Indian-with-marriage-obsessed-mom, vindictive exes, dumb bimbette who ‘just wants friends’, splashing about on luxury & beauty goods regardless of logic or danger.

Entertaining? No and since this is a film, that is the prime purpose. A story that gives talented actors so little room to entertain, does them (and the audience) grave disservice.

All in all, I think it’s clear that Ocean’s 8 is not only a bad movie, it’s also actively anti-feminist. What else would you call setting up so many talented women in a film that shows women and these actors so poorly?