MUSIC: ‘The Feni Farm Riot’ By Dischordian At Blue Frog 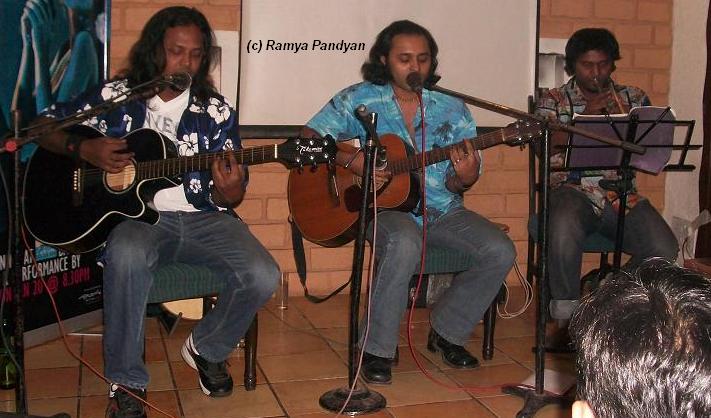 Remember these guys? They are Dischordian of the whiskey-voiced Garreth D’mello (also Split frontman), the teddy-bear-like trumpeteer Agnello Picardo and the silent-soulful guitarist, Howard Perreira.

Dischordian describes itself as ‘an attempt to move away from the wall of sound and aggression and testosterone that makes up most rock music, an attempt to strip music down to its basics’.

I’ve been listening to and loving their music for over a year now. They contributed ‘The Old Whore’ to the Stupid Ditties 3 album (download the track here). They’ve been performing at various venues including The Blue Frog and Novotel. They were also present at NH7, Pune.

If you’re new to Dischordian, you can expect a rock-jazz feel, the rock influences probably a throwback to Garreth’s teeshirt-ripping days on stage and the jazz entre courtesy Aggie’s trumpet. In addition, they’ve been evolving their songs over performances to add a new dimension that sounds bluesy to me. Personally, I prefer the songs in their old avatars (Bucket of Blood!) but their newer versions appear to be finding favour with the audience.

Today, they go into the big league with the launch of their maiden album, ‘The Feni Farm Riot’. The album promises to old favorites with a few new twists. Sample the album over at Reverbnation.

I’ll be tweet if possible. If you plan to join me, let’s hashtag the tweets #discordian and #fenifarm.

Here’s raising a bloggy-toast to Dischordian and I’d make that a feni, please. 🙂