MOVIE-Sherlock Holmes: A Game Of Shadows 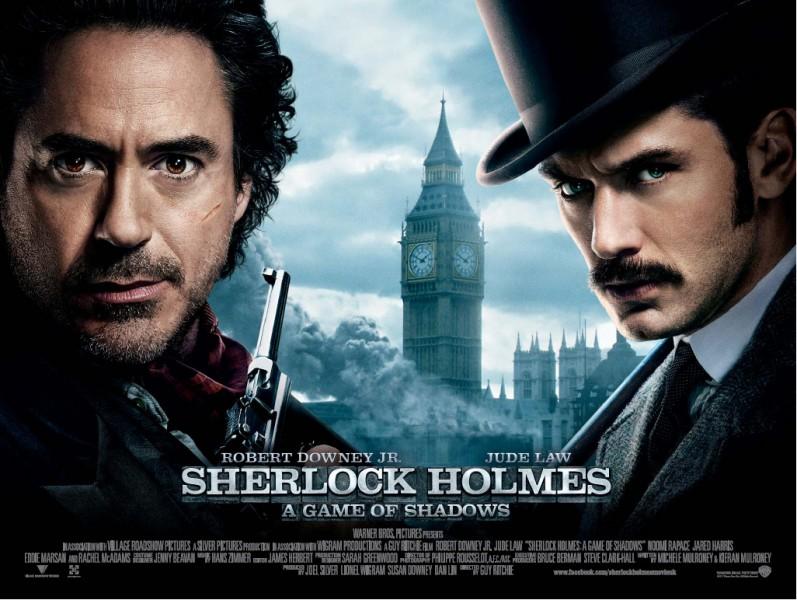 Just earlier this week, I was talking about the revamped James Bond, played by Daniel Crag and why I wasn’t a supporter. The boy said that James Bond (Ian Fleming’s original) was not relevant in modern times. While that may be true, my point is that if a movie is using a character’s brand to pull me into the theatre, I feel cheated when I get something else. James Bond is supposed to make me go weak in the knees, not make my heart bleed for him.

I could say something similar about the Sherlock Holmes movie franchise. Still, the first movie made me want to consider that I could look at it as an independent storyline, not a depiction of Sir Arthur Conan Doyle’s hero. It’s very hard to be this objective about a character one loves so much, but if the movie is entertaining enough, it is possible.

Sadly, the second movie Sherlock Holmes: A Game Of Shadows did not permit me the same grace. Many things did not work for this film, the biggest of which was that it simply did not entertain. Halfway through the movie, I was already straining to look at the time and I actually groaned when the plot took another turn, indicating another half an hour at least.

Let’s start with the most obvious bits. Even as an independent character, a detective is fun to watch when you can see how he figures out a mystery. The ‘Show, don’t tell’ rule of story-telling was conspicuously absent in the film. The characters rushed about in what seemed like a wild-goose chase, interpersed with a sprinkling of rapid left-right head movements, presumably indicating Holmes’ brilliant mind at work. But none of those workings were ever shown satisfactorily. It was like someone stepped in and said, “There ought to be some Sherlock Holmes in this movie. Let’s pick at random and throw it into the film at some arbitrary points.”

The second most compelling thing about a Sherlock Holmes story is the case itself. Human foibles, grey emotions are all brought out in a compelling way in the books. The film completely missed that too. An extremely cardboard villain whose motives are explained away with,

“Bad people do bad things because they can.”

left me with an unpleasant taste in the mouth. I’m not stupid, Mr.Guy Ritchie.

Even if I were to hold on to my original premise of not expecting the same of the film story as I would from the books, it didn’t work. Robert Downey Jr. looks wasted through this film (worse than the earlier one). If that’s a tip-off to Holmes’ opiate behaviour, how does he manage to be fit enough to perform the stunts that are shown? He’s a detective, not a superhero. Even in an independent world, that means a regular human being whose prowess is more in the mental realm than the physical. As a fan of the detective fiction genre, I’m offended by one who is so stylised that he’s almost a drunken dandy, a guy who draws so much attention to himself when his profession involves moving in the shadows.

And then there were the characters. Some of the Holmes universe’s best known people make an appearance here but they were all nothing more than props for the main character. The tiny handful of smart lines were reserved for pseudo-homosexual banter between Holmes & Watson. Jude Law (Dr.Watson) and Rachel McAdams (Irene Adler) both looked thoroughly fed up with the movie and delivered their scenes like they were parodying in a small out-of-the-way theatre.

After the movie had managed to tick me off in all these ways, I also had adequate time to notice other things. The look/feel of the film looks all incongruous given the times that it is set in. Machine guns in the 19the century? And never mind the weaponry, what about the people? Did women really move that way, with such confidence (even arrogance)? Even Mad Men (set in the 1950s) seems primmer, more prudish and chauvinistic than these times. It doesn’t make sense at all.

This movie might have had a chance to entertain, if it could only make up its mind what it wanted to be – action flick, superhero caper, war film, comedy. In the case of the first movie, I’d have said watch without expecting Sherlock Holmes. For this movie, I’d say, don’t expect to be entertained unless repetitive stunts and tomfoolery are your thing.

3 thoughts on “MOVIE-Sherlock Holmes: A Game Of Shadows”