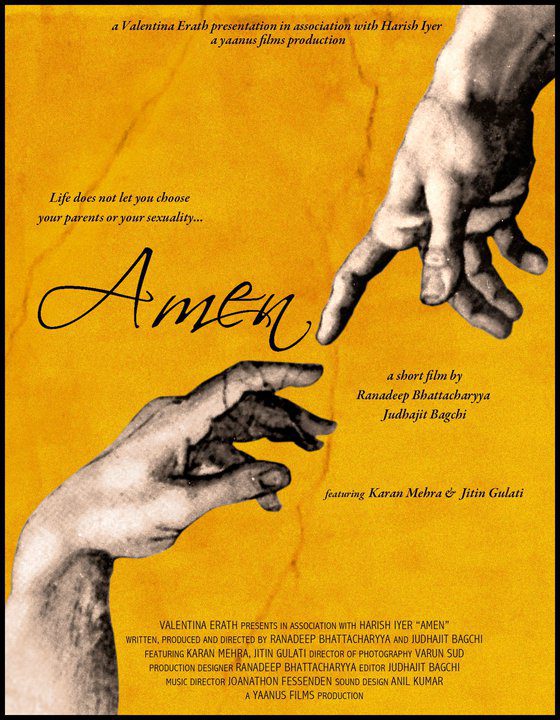 What’s better than spending Saturday night with a gorgeous, intelligent, witty and sensitive man? I had the privilege this weekend. Harish Iyer invited me to a private screening of the short film ‘AMEN’ based in part, on his life. My first question was to ask if I should dress up. He said, “No yaar, I’ll be there in my regular jeans and all.” Thank goodness for me then, that I’ve met Harish before and I know what his idea of ‘regular jeans’ is. Never trust a gay man who says he isn’t dressing up!

The movie was screened at Pixion, a luxurious 24-seater in Bandra. The poster shows a part of the famous Michelangelo fresco depicting the Genesis and bears the tagline,

“Life does not let you choose your parents or your sexuality.”

One social message is a heavy charge for a film to bear without getting typecast into the shoddily made, preachy documentary mold. AMEN touched on internet hookups, rape, incest, child abuse, trust issues and love, in addition to homosexuality. It is remarkable that a film could accomplish all of that without sounding like a laundry-list of the ills of society.

From a storyteller’s point of view, it was interesting to see how the team managed to make a powerful commentary about the life of a gay man, fraught as it is with much uncertainty, loneliness, fear, mistrust and anger….all of this through the very intimate portrayal of two characters. The film could have gone two ways – maudlin or sleazy. Instead, it came through as sensitive, realistic, disturbing but also thought-provoking.

AMEN is a 24-minute film with taut storyline and a certain freshness without the glitches of an amateur production. The characters were well-defined and both actors (Karan Mehra and Jitin Gulati) essayed their roles without any of the self-consciousness that one might associate with such a bold project. One of the best compliments of the evening came from Vinta Nanda (director, Tara). When she said,

“Ordinarily when you watch a boy-meets-girl story, the women associate with the heroine and the men with the hero. I am a woman but I was completely immersed in the story of two men.”

Personally I liked the two intertwining threads of story within the film – two characters who’ve come to a situation from different places. Their individual experiences have shaped them differently and as a result, how they come to terms with their lives and their sexuality is different. Everything that we watch and read about love stories involves a certain automatic slotting of characters into their gender roles, a certain, ‘It’s a guy thing’/ ‘That’s so girly’ attitude. But AMEN made me see the characters as two people, each one a unique set of emotions and experiences. It made me empathise with each one separately and isn’t that an artist’s greatest challenge?

One normally expects a certain kind of scene to draw a certain premediated response. The violence and intensity of the starting scenes were disturbing. However it was the subtlety of Harry (Karan Mehra)’s mirror scene that really brought tears to my eyes. The mirror, as a metaphor for self-reflection, for facing one’s fears and the subsequent connection of fingertip to reflection was beautifully done.

I also liked the way the conflict was resolved realistically and not in the conventional ‘happily ever after’ way. The ending completely satisfied me as a viewer and that may be the best thing that can be said about any movie.

The making of AMEN is probably enough material for another movie altogether. A labour of love for both Ranadeep Bhattacharyya & Judhajit Bagchi, the experience had them playing producer, director but also spotboy, technician, teaboy and scriptwriter. The shoot commenced over 3 days in a small bungalow, after which the team hand-packed the sets, bundled into a tempo and delivered back the props borrowed from friends and family. Midway during the production, they found even their tight budgeting would not cover the costs of the film. Then Harish put up a status update on Twitter about this and to their surprise, a stranger offered to help them. Expenses were often cut down but money would continue to make its way to them till they finished. Their online guardian angel, Tina Valentina, actually met the team for the first time only at the preview of the film. AMEN was helped greatly by an excellent background score, a gift from Jonathon Fessenden, Hollywood composer and a professional look/feel thanks to Prasonjit.

In sum, AMEN is a fine movie with a solid story that also carries a number of powerful messages. It will definitely be of interest to the gay community but also to anyone who likes good cinema.