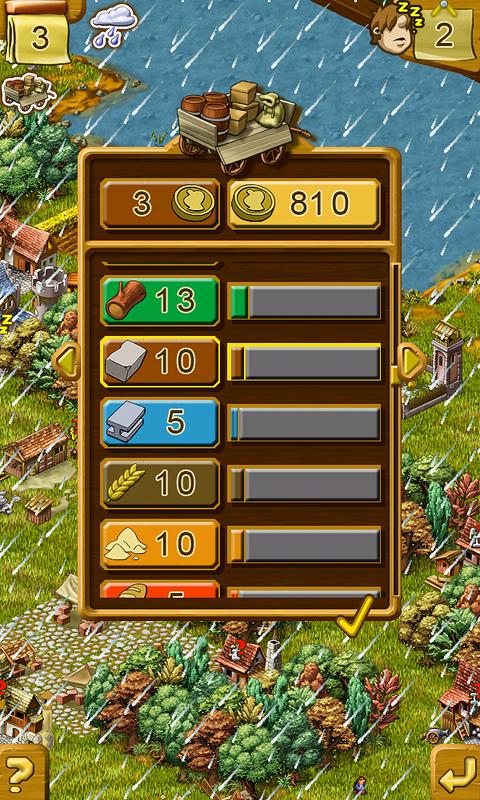 I’ve always enjoyed games that involve manufacturing, bartering & managing resources. A number of these follow a standard format. You’ve come to a new country (or city). You need to build houses for your people, identify food sources, create means of employment and facilitate economy. You may also need to manage a defense environment by building barracks, training army, manufacturing weapons and directing wars and/or defensive tactics. Along the way, you also complete tasks, quests and acquire upgrades, powers and medals.

Board games started me on Monopoly in its various delightful avatars and then progressed to Risk and the Catan games. The internet offered up a wide range right from the casual Empire to the MMORPG, Runescape. Even ZyngaGames tapped into this with Farmville, Cityville, Mafia Wars, Petville, Cafe Story and others.

The Android market has its share of options. Unfortunately for me, most of them seem to be incompatible with my device. Still, here are two that I found interesting enough to try out.

The first, Townsmen 6 comes in a free version and a paid-for one. You start by entering one of the

territories in France, during the French Revolution. You need to build houses, each of which adds two people to your population. Lumber huts and quarries must be established to gather basic resources. Food sources like farms, fishing huts and windmills & bakeries must be created. All of these need people to run there so you need to distribute your people accordingly in each place. The more people work in a building, the faster and higher its output. Other buildings that don’t require permanent employees like wells and storage sheds also must be built. At the first level upgrade, your existing buildings can be upgraded to employ more people and produce more.The next stage of progress includes more developed buildings such as universities (where scholars can research creating newer functions & buildings), coffee houses (where propagandists can be created) and military camps (to train and maintain soldiers). And finally, you can extend your control by moving to other regions and building your communities there too.

In Campaign mode, the territories you enter will already have some settlements, possibly hostile to new encampments. You may need to manage your community as well as protect them from conversion and/or attack. Weather plays a big role in the productivity of a community as well as their morale (which directly impacts productivity as they refuse to work in prolonged rainy weather). Starvation or lack of certain key resources can also cause strikes. And finally, you have a limited period to establish or turn around a community.

Townsmen 6 is great fun since it involves managing people, resources, schedules & war strategy.  Unlike many other phone app games, it allows for different ways to play the same game. Between region acquisitions, you’re also allowed to build in an additional chance component by flipping a coin for a lottery-style resource bonus.

Resource management games involve spending a lot of time staring at the same picture. Hence the quality of the graphics, the people’s expressions, movements and the look of the structures is extra important. Townsmen 6 has beautiful graphics and mood music to match. The level of detail in the trees, rain, farms and buildings ensure that boredom doesn’t set in. The people look like funny, little cartoon characters dressed in Medieval European style and scurrying about their work, grinning broadly or pouting (when bored). Strikes show these tiny citizens congregating outside buildings and pumping their little fists up and down. Low morale is depicted by a series of Zzzs issuing from the face of a sleeping townsman. All in all, the game is a visual delight as well as a completely satisfying experience for a junkie of this game genre.

Townsmen 6 is developed by HandyGames and is available for download in the Android Market.

The other one, Sea Empire has you in the role of a sea captain, racing for sea economy supremacy across islands. Each island produces certain resources. You can mine them, ship them across to other islands and trade them for other resources. As your earnings increase, you can build more ships and/or buildings and thus grow your empire.

The Random Map option lets you design your game map by selecting number of islands, fortresses required to win, big resource islands and the number of opponents. Campaign mode takes you through specific missions on the map, doing these tasks.

Maps & directives are depicted on what looks like an ancient map, torn and faded at the edges. This is a nice touch. The soundtrack is an object splashing through water, alternated by sawing/hammering sounds during building, which works well. However, the aerial-only view is a bit of a turn-off. The grandeur of ships and the majesty of the sea are things we usually see at ground level. The graphics on this game are not high quality enough to substitute for that. The mobile screen is too small for one to be able to appreciate the look an island. This last is a vital missing component since a big part of resource management games is the sense of satisfaction the gamer gets, from seeing growth & development on what started as a bare plot. On Sea Empire, the islands just look like blobs with tinier blobs within them.

Gameplay happens by tapping on the island that you want to send your ship to, to trade, manufacture or build. Possible options for these are presented in the same cream colour as the rest of the screen while options that are unavailable are in grey. The main screen also has a status bar showing what day it is, the level of each of your resources and a ‘speed up’ option. Overall, the game is promising but gets boring because of the monotonous visuals.

Sea Empire is developed by BluePlop and is available for free download in the Android Market.