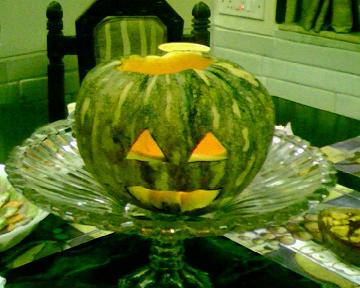 A blog-meet! Halloween is as good an excuse as any other, to bring together a bunch of bloggers I guess. This group had the “A“s of A-listers (including the man who defines the list!) and some aam-junta types (like yours truly). Here’s the line-up in order of appearance at the party (I will be politically correct for a change and not mention who belongs to which of my two categories)

Sakshi Juneja (our gracious hostess in a Superman tee)

Manish Vij (Ultra cool, ultra dude ultrabrown…though methinks a matrimonial ad for him would describe him as ‘wheatish’)

Gaurav (scarily resplendent in tie inside shirt, a la SRK in Don2)

Now I expect each of these people will all write chronicle the meet far better than I do, so I’ll just throw in random bits that stayed with me.

For starters, everyone knows Sakshi Juneja is a cool lady blogger who writes these rocking posts. But how many people know of her talent at reading hands? In honour of the great party she put together and in deference to her fetishes, here’s all of us doing a show of hands literally…

We have also heard of Ultrabrown’s ventures but here it is breaking news….his latest book will be called “Pran is my landlord”. Oh and yes, he is the man you want to meet if you want the lowdown on Salman Khan’s fashion sense and Rishi Kapoor’s love life.

And now since I’m taking potshots at everyone, including the A-listers, I’m sure my future on the desi blogsphere is doomed anyway, so I may as well do a good job of it….digging my own grave that is. I was one of the only three people who actually turned up in costume. Well the three of us may have portrayed varying degrees of costume with charming Melody being the best with her Playboy bunny ears. Gaurav’s spoof of Shah Rukh Khan’s scarrylicious look in Don…I’m not sure if that qualifies as a Halloween costume but what the hell, it was scary on the original so I guess it makes the cut. I wore a pair of laboriously put-together red horns on my trademark evening black….but in my case the evil seemed to seep into my brains each time I wore them instead of radiating out to everyone else….baah, that’s scary!

I managed to make several bloopers, ruining my self-proclaimed image of an intelligent woman once and for all…and I only have those damned horns to blame! It began with the auto-rickshaw driver who ferried me there valiently through mad traffic. I asked him to wait outside while I checked out the address. Once in though, I got caught in the general hi-howdies and ten minutes later, had to be reminded to go rescue (and apologize) to the poor man. Hmph….

I was saved eventually by the entry of the very charming and pretty Melody who kicked off with the “I don’t read any of your blogs” blooper that I made at my first blog-meet. Ah…you live, you learn…of all the things that one must NEVER say to another blogger, this tops the list. But she did tell us some ways to say things that aren’t ‘proper’. Melody’s gems:

– She’s a Bit of a CH!
– He’s a parachute without the first four letters.

Sakshi’s ringtones (that of Boman Irani’s in Lage Raho Munnabhai) was the topic of intense discussion. There now….I thought nothing could beat my ‘Kill Bill’ theme song but Sakshi outdid us all!

Gaurav (who’s blogging again…*muffled yippee*) may have thought his tie-inside-shirt would cause a stir at the blog-meet. I don’t know if he intended his ‘questionable preferences’ to become the topic of everyone’s conversation. We ended up toasting the guy he claimed to have held hands with and cooked romantic breakfasts for. Ullllpp….sorry S.T…….I stand accused of too much ‘Bit of CHing’ so this public apology is my olive branch to you.

And finally….in case anyone still labours under the illusion that bloggers (even A-listers) are actually intellectual, take a look at the things that were discussed:

Sanjeev Bhaskar is a really nice guy!! (Sakshi saw his hand reach out for a pizza!!)

Salman Khan’s just a poor misunderstood guy, who on his visit to the jail was really nice to the inmates there, even while the press tortured him with minute-by-minute recounts of his day.

Is Melody the Mandira Bedi of the blogsphere?

Is Akshay old enough to drink? Ah…that’s what the beard is for…

Should UltraBrown add a couple of ‘a’s to his URL? Numerologically speaking of course…

What’s the A-lister’s way of drinking beer? (holding the can at 45 degree angle to ground) And is that better than the other A-lister’s technique? (offer it to A-lister no.1 when the can is empty)

We ended the party with a sparkler-lit cake spelling out “A very scary Blog-a-ween” and yes, we did sing “Happy Halloween to us!”