Hairy Not Scary: Wella Kolestint Didn’t Change My Look But It Sure Feels Good 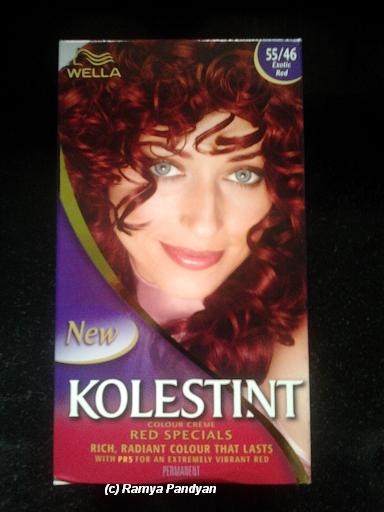 I think I became conscious of my hair around the age of seventeen. I had survived the big, curly haired dos of the 80s, looking on wistfully, since my own was ‘flat and sat on my head like a mop’. Straight hair became popular in the mid-90s and happily for me, that coincided with my teens. Of all the image-issues a teenager could face, bad hair wasn’t one of mine. My silky, straight locks were suddenly in and have been a source of my vanity ever since then.

I started ‘doing’ stuff with my hair well only in my 20s. I guess I was scared to mess with the one thing about my appearance that actually worked on its own. Rebonding was the first styling technique and it took my mane from the ‘nice girl’ look of hair that contoured itself around the face to the harder, then edgier, razor-sharp look. The only odd touch was that now my extra-straight hair shone so much that it sometimes got mistaken for white patches in photographs (true story, someone asked me online if I was prematurely graying!!).

My first experience with hair colour was at twenty-four. My cousin was getting married, I was going to wear a startling red Kanjeevaram saree shot with gold threads. I figured I’d add something whacky to that look by way of colour. My shoulder-length hair was streaked with brilliant eye-tearing red. I loved it when I went home. But the euphoria lasted all of a few hours. My scalp began itching and burning unbearably the next morning. Unfortunately I was due in Chennai in a couple of days. To make matters worse, with every wash, the colour ran out so badly that I landed in Chennai with hair that was streaked dirty brown with only faint traces of the brilliant red.

Someone suggested using egg to condition the hair. In desperation and deaf to my mother’s pleas to not stink up the bathroom, I broke an egg onto my head, rubbed it in and sat in the smell for five minutes. It was so soothing, I incorporated it into my routine. Once a week, I’d massage some oil into my hair, then coat it with a mixture of egg, a spoon of curd and a pinch of mehendi. It worked wonders. Not only did the itching cease, my hair began growing faster and thicker. To this day I follow that routine, even if the frequency has reduced. My hair is still silky, thick and glossy.

You would think that after such a disastrous experience, I’d never touch my hair again. Call me an optimist there then, since I didn’t stop. Hair, I reasoned was dead cells. It would grow out, fall out or be cut out. But as long as I had it, it would be a waste to not live a little. In the years to come, I tried every length and style I could think of. About four years ago, in the middle of a life crisis, I decided to follow the oldest trick in a woman’s book and change my look to change my mood. I chopped off the mid-length flip hairstyle I had, into a pageboy-like cut with straggly strands down the back. And I had it coloured in four colours – burgundy on the right, brown on the left, shocking red down the front and golden-blond on the back strands. It turned some heads alright, even if it didn’t quite turn my life around.

I haven’t styled my hair other than the usual haircuts, for nearly two years now. I guess even if my hair is fairly malleable to styling, I just like the natural texture too much to deviate from it. Even the best of hair colouring experiences has caused a slight dryness, a subtle roughness. So I’ve stuck to the safe for awhile.

Nearly two months ago, I was invited to a blogger event at Bungalow 9, Bandra, to introduce Wella Kolestint’s do-it-yourself hair colourant. There was a short talk about the product, its history and technology. Hair consultant, Natasha Nagaemwala addressed questions and talked about her personal experience with the product. The afternoon closed with a free product gifted to each blogger with Natasha advising on shade and coloring style.

A few days later, the advertisements with Bipasha Basu, the official brand ambassador began airing. The premise of this product is that men don’t tend to notice when women change their look but a good hair colourant could really get him to notice you.

The box in its fancy red cover has sat in the corner of my wardrobe all this while and I’ve felt a little twinge of guilt each time I saw the ad air, for not testing it. For all my wildness, I’m still a little leery about touching the one thing about my appearance, that does work. Still, I took heart today and pulled out the box.

It is a 4-part kit containing a pre-treatment cream, a developer, the colour cream itself and a post-treatment conditioner. Natasha had taken one look at me and suggested the ’55/46 Exotic Red’, which was the one I had an eye on too. I’m told that it’s not a common colour since it is so bold but somehow red has always felt right to me. She also suggested that given my face shape, my style and personality, I could go in for a whacky one-side colouring. I debated buying a brush and silver foil to try out all of that. In the end, though, I decided to just go the simple route and cover the entire head (it’s called global colouring). The right choice, I realised after I started the actual process.

Here are some things I noticed:

1. Skin test: The instructions prescribe a skin test to check for allergic reaction but do not explain what this is. For a hair colour newbie, this can be baffling. I had to call a friend to check.

2. Packaging: You’re supposed to mix the developer and the cream colour in equal parts for the colour. The developer is in a bottle with a nozzle whose cap has to be broken off and can’t be fitted on again. This means once you open it for the allergy test, you need to use it within the next hour. That goes counter to the instructions that tell you to wait 48 hours before application.

3. Colour shade: As it turned out, I mixed a couple of drops of developer and cream and tested it on the inside of my elbow. The patch turned red in ten minutes and the colour hasn’t worn off through heavy soaping. But the results are different on hair and skin so this test doesn’t actually tell you how the product will look and feel on your hair.

The instructions also say the mix has to be exactly 50:50 or the colour results cannot be guaranteed. After application evenly, you’re supposed to for 40 minutes ‘or as long as indicated by the strand test’. No explanation of what a strand test is so I’m assuming you clean a strand to check if the colour has caught. The tips of my ears, back of neck and bathroom floor were all streaked red so I assumed the colour caught on really well. My hair just looked like it had been soaped but not rinsed out…white foam settled on the strands. I waited about 50 minutes and then rinsed out with a little warm water as prescribed. As expected, the water ran out all red. After that, I massaged in a little post-treatment conditioner and waited the requisite two minutes.

All excited I took the towel off my head and ran to my mirror to check. My hair still looked the same. If I couldn’t tell the difference, I rather doubted that the boy would. On the up side, it didn’t t feel rougher or dryer. Still, I could get this feel with a handful of beer (I’ll tell you about that another time), an egg or even my simple everyday shampoo.

Two hours later, the hair was dry. I still couldn’t see any difference. But when I met the boy and asked him, he said it looked very subtly coloured. Another friend echoed the same thing. I decided that I should wait till morning to tell. Now, in daylight, I can see what they mean. My hair looks a deep, burgundy. When I stand in the sunlight, there’s a sort of halo of the colour along the edges of my hair and I daresay when it moves, you’d be able to see a swish of the colour.

I’m guessing taking out the bleaching step (which hair salons routinely do before applying colour) means that the colour doesn’t show. Well, burgundy isn’t exactly what I signed up for but it is a lovely colour anyhow. I feared a global head of flaming red might be too much. Oddly enough, minus the four-odd hours a salon would have taken, not to mention the rates (!!), I seem to have gotten myself a pretty classy highlight in about an hour’s time at home. But I’m just wondering that if the most extreme red showed up as burgundy on my hair, would a burgundy or a chocolate have showed at all?

My hair smells faintly (but not unpleasantly) of the chemical. I’d heard a few people wax eloquent about the conditioner and I have to agree with them now. It feels distinctly luxuriant and soft to touch, even though I haven’t shampooed my hair today. Also, I usually wake up with at least a few tangles (my hair is too short to tie up). But this morning, when I jumped out of bed to rush to the mirror, a shake of the head is all it took to settle into position.

Wella Kolestint might want to consider revising their instruction manual to make the tests clearer, since presumably I didn’t keep the colour on long enough. If the product is meant to be truly do-it-yourself, a user should not need anything but the instructions to reach the promised result. Also, if the low colour intensity is something other users are seeing, maybe it’s back to the drawing board for Wella Kolestint. Keep the good conditioning, up the colour!

The product was a free blogger PR sample. This review is based on my experience. I used Wella Kolestint 55/46 Exotic Red. The pack is adequate for a one-time global colouring.

12 thoughts on “Hairy Not Scary: Wella Kolestint Didn’t Change My Look But It Sure Feels Good”