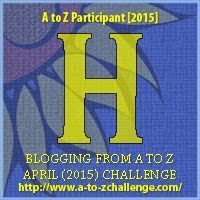 I caught the media premier of a movie on Wednesday and am due to write its review. I thought I’d combine it with my April 2015 A to Z Challenge.

Paresh Rawal playing a man challenging society’s obsession with religion. Now where have we heard that one before? And a colourful godman, complete with wild locks and flashy sneakers, riding in on a motorbike. That’s known too. You’d be forgiven for wondering if Dharam Sankat Mein is what happens when MSG marries Oh My God. I’m not sure people will forgive the movie for those similarities, though.

Now take a look at the trailer.

Done? So you know the important plot points already. A Hindu man in Ahmedabad discovers that he was adopted from Muslim parents. It’s an interesting premise. Let’s talk about what I did like about the movie.

It is set in Ahmedabad. That makes for a nice change from movies set in Mumbai or Delhi (jaded, uber-urban brats and the idle problems of First Worlders in a poor country) or the ones set in ubiquitous North Indian towns (full of gossipy neighbours and a Mountain Dewesque desire to break free). Ahmedabad is a bustling city and close enough to a major metropolis to not be overawed by it. It’s also smaller and comparatively homogenous in culture, making the problems of diversity very real. And finally, given that our much discussed Prime Minister and his politics hail from there, it sets the tone for a rather bold statement.

I did wonder whether the frequent Gujarati sentences thrown in would bother the audience. I am a Mumbaiker after all, so Gujarati is like a second language to me. But that isn’t true for the rest of the country. Still, we’ve survived the Punjification of Hindi cinema for decades now, without flinching or letting it stop our acceptance of the stories. So I’ll hope North India doesn’t turn this movie down, solely because they couldn’t digest its linguistic flavour.

Paresh Rawal is in perfect form but that’s not surprising. The role was written for him. I wonder whether he is starting to get slotted, the way Amitabh Bachchan was in the early millennial decade. AB became the go-to guy for stories needing an old, strong man while Paresh Rawal seems to be the quintessential middle-aged skeptic dealing with change in a reluctant but humorous way (Hera Pheri, Hulchul, Oh My God). You already know what to expect and how he’ll behave, when he appears on screen.

Annu Kapoor was the surprise element for me in the film. As the firebrand Muslim lawyer next door, he delivers one Urdu couplet after another perfectly crafted verbal explosion and keeps the audience hooked. I was happy to see that he had a sizeable role in the movie and a chance to explore his rather unacknowledged talents.

The story doesn’t flinch from delivering hard truths. It addresses latent religious biases, the defensive stance of minority groups, the sense of identity crisis that occurs with a parent’s death as well as the pressure to change to please the offspring. The trouble is that it tries to do all of these things and the effort shows. None of them get addressed fully before the story rushes off to deal with something else, equally big. For instance, when the imaan tells Paresh Rawal that he must learn the Muslim way, the audience starts to think about what this actually mean. But all the movie does is describe the motions of namaaz and make a passing reference/joke to pronouncing nuqtas.

There are several things going on all at once and the pacing seems completely off. Paresh Rawal holds the bumpy set of incidents together but still one is left feeling disoriented. And all the effort that it takes for the key characters to hold the story together, leaves no room to flesh out the others, making them but cardboard cutouts in the background. The ending seemed too convenient, as if the film-makers, exhausted by the effort, decided to just stuff what was left into wherever there was room.

I have to say this. I was terribly disappointed with Naseeruddin Shah. His character is an extreme one but I would have expected better of this actor than to turn Baba Neelanand into camp horror.

Overall, Dharam Sankat Mein isn’t a bad story. I think I would preferred to read it, though. The medium of cinema seems to have overwhelmed the makers and the end result is amateurish. Since comparisons with Oh My God are inevitable, this film looks like a starry-eyed but not very polished attempt to follow up on that theme. But if your weekend’s only options are an overdone car race franchise or a violent postfeminist saga, this might get you a few somewhat intelligent laughs.