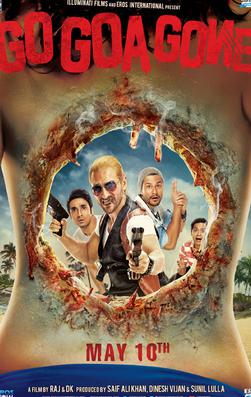 I’ve only ever seen two movies on the same day, once in my life. That was the day Saawariya and Om Shanti Om released together and I came home with a headache and a blue disco hangover, swearing never to do that again. I broke that rule today and how delicious, I had a wonderful day!

Starting the day with a solo matinee of Bombay Talkies was a sweet surprise. And I ended the evening with Go Goa Gone. The friend I invited along, tossed off a comment about the ‘ZomCom’ that I was going to watch which made me think I must be getting old since I didn’t recognize the abbreviation. Zombie comedy seemed a misnomer to me and I wasn’t that hopeful given the cast seems to range from child stars who never really made it big as adults (Kunal Khemu), funny-but-always-sidekicks (Vir Das), Mr.Nondescript (Anand Tiwari) to ageing-and-desperate Saif Ali Khan.

Well, take all those notions and throw them to the zombies to chew on. Go Goa Gone was fun, funny, fun from the word go! Three friends find themselves Goa-bound. One, the classic hip dude/douchebag is in trouble for getting upto nooky at work, the second paavam prani has been dumped by his girlfriend and the third geek/good boy thinks he’s going to a business conference. They wake up on the other side of a rave party on an island off Goa’s mainland and discover that everyone at the party has turned into zombies.

The humour might have been grating were it not for the fast-paced action. And the zombie horror bit might have been screechy if it hadn’t been for the laughs. Quite surprisingly Go Goa Gone seems to hit the perfect balance between chills and laughs. It was actually fun to be scared of something other than the random ‘Boo!’ kind of scares that current Bollywood horror seems to dish out. And yes, it was such a pleasure to watch entire dialogues that weren’t being sterilized by censorship. If the words sex, fuck, fucker or gaand offend you, you might want to stay away from this film. Somehow in this film, this language didn’t seem to be thrown in for its ‘cool’ quotient but because realisitically, that is how people talk.

Aside from the language, there were genuinely funny sequences through the movie and I’m glad to say that these were plentiful. The sequence on the window ledge, right after Hardik (Kunal) gets caught with his pants down at work was a beauty. And the first conversation between the three friends where they try to piece together what they know about zombies is howl-a-rious. Finally, I loved the fact that they didn’t run out of the magic laugh-creating formula midway. The ending twist before they get off the island, was perfect and resulted in an explosion of laughter.

All in all, I’d say watch the movie. I’m heading to Goa as soon as I can!