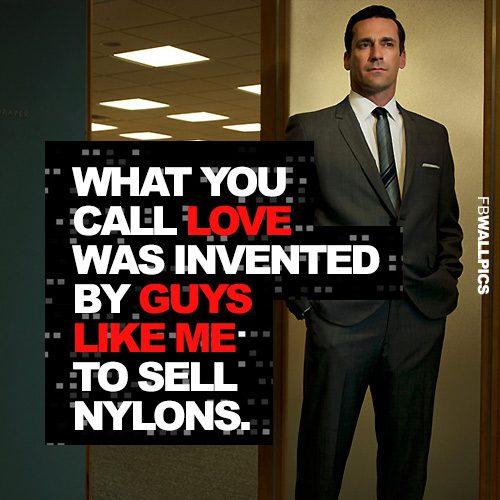 I saw the fuckboi yesterday. He is part of the same circles and I refuse to acknowledge him anymore so his presence in isolation is not such a bother. But I am surrounded by his manipulative behaviour, in the form of other women who look as starry-eyed as I *cringe* probably did back in December. (Notice how I feel ashamed of myself for a positive emotion and a pretty good performance; thank you, fuckboi.)

Some of them are women I know and I’m caught in a quandary. Should I warn them, risk the heavy ugliness that society and men thrust on a woman who dares speak (including from these very same women themselves)? Or should I stay silent and let other women fall prey to the same fuckboishness that makes them doubt themselves and cripples them in male-dominated spaces? I need more women like me in the spaces I frequent and I can see how behaviour like this costs our kind dearly. What a catch-22.

Maybe it’s highlighted by the fact that I’m watching Mad Men right now. But doesn’t “Oh, he suffers social anxiety” just feel like a modern, fashionable version of, “He’s deep and brooding” (Mr.Darcy), “His parents didn’t give him enough attention as a child.” (romcoms featuring white males and Manic Pixie Dream Girls) and other such excuses? A fuckboi is a fuckboi. There is absolutely no excuse for treating another human being badly and making them question their self-worth. Women have problems too (rape culture, online harassment, salary disparity, biological clock ticking, unsafe spaces) and most of us don’t get to use that to tread all over men and get applauded for it. No, fuckbois, I don’t care if this is politically incorrect but I’m not buying it.

I am thinking about whether this particular fuckboi and my strong reaction to him is just a symbol of my deeper feelings for my ex, the longest running fuckboi in my life. That one issued a vague apology last year on Twitter that could have been aimed at anyone but that I suspect was about getting in on the ‘I’m a reformed man, applaud me’ trend. I wish my friends had not bothered sharing it with me. I was going along in my life, having put that particular nightmare behind me. But with that screenshot fed into my inbox, I was forced to think about him again.

His apology was public and got him a lot of positive attention. He never once said sorry to me, in person or in any form of private communication. He did not even acknowledge my existence. I concluded that he was no different from who he was in 2011-12 when he isolated me from my family and friends, stopped me performing or working, hit me, gaslighted me, abused me, allowed his family to subject mine to dowry demands, ended the engagement when I called it out, said “It’s not my problem” when my period was delayed and then “So what? Breakups are difficult.” If that apology was aimed at me, I say

“Not good enough. Too little, too late. Wait, was that an apology or your version or Being Human?”

But no one cares, do they? The truth has not changed but I’m forcibly pulled into this Fuckboi’s drama every time he feels the need for attention. And everyone who knows either or both of us even slightly, is looking at me expecting me to hand out the bouquets like the gracious woman I am supposed to be. I lose every way I look at it. Is there any escape from the land ruled by Fuckboidom?

The current fuckboi of course, didn’t get to do a fraction of what that one did. He vanished, then when I stopped, he reappeared with gifts and love poetry. When I relented and agreed to have a conversation, he pointed out that “You come across as having very strong anti-male sentiments”. When I refused to take note of it and him beyond that chat, he took care to message me and remind me that “I listened to your work. No, you are not anti-male.” Back-and-forth, back-and-forth till the unpredictable approval could be distracting enough to be all I would think of. So familiar. He’s just another in a long line of fuckbois who don’t care or even really see the women around them. Not  in any way other than breasts, butts, vaginas to grope, ears and arms to receive their existence and words only to validate them. I am still grappling with how to deal with so many men being this way. The challenge grows exponentially considering that they’re surrounded by women who fall prey to them and enable their fuckboi behaviour, even to the point of hurting other women.

I asked a friend yesterday why I was attracting such nastiness when I tried to steer clear of people and focus on my own writing only. He said,

“You know what you want. Not many do. That creates a dichotomy between you and such people. My advice, if you want it? Not worth engaging. It will tire you and they will not understand what you are saying.”

My friend is right, in part. The tricky thing is identifying the handful that are willing to let me live, from the vast hordes that want to pull me into fuckboiness-and-support-fuckboidom.