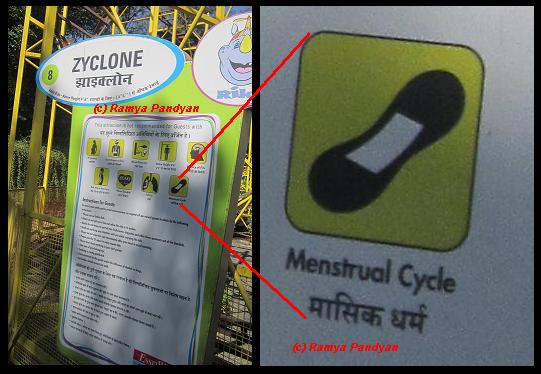 I’m sick of overpriced theme restaurants, terrible movies at multiplexes, stale food court fare and weekends spent window-shopping at malls. I’ve been looking for some affordable, fun things to do and this weekend I found one. I spent Sunday at Esselworld.

My earlier trips were by road or the Marve ferry. This time, I decided to try the Borivili route. A taxi offered to take us there for Rs.250 flat rate. We turned him down in favour of an autorickshaw who consented to carry 4 passangers for Rs.100. The ride took us about ten minutes and he dropped us off bang in the center of a fish (and seafood) market.

The ferry ticket booking counter should have been an indication of things to come. I remember Marve (near Malad) as a little beach shack that sold tickets and had a ferry every half an hour. I’d warned my friends to expect to travel alongside fisherwomen, motorcyclists and regular thoroughfare. But we weren’t prepared for the Dadar-station-at-peak-time style crowd that thronged the counter. We managed to get only ferry tickets, despite hoardings advertising that Esselworld/Water Kingdom passes could be purchased too. Then we had to make our way down a narrow ramp, lined by fish-sellers on one side, incoming ferries on the other and sandwiched between a mass of humanity. Much line-jumping and fights ensued in this melee. Mercifully the rickety looking ferry took us across (‘ML Christmas’) in ten minutes to the other side, clearly visible from this side. The distance is short enough and the crowd vast enough to merit a bridge but I’ll guess the ferry lobby wouldn’t want that.

Once on the other side, we spent another hour waiting to get entry tickets. I’m pained by the ineptitude of having multiple ticket windows & computerized systems but only manning half those windows and allowing only specific transactions on each window. Multiplexes are as guilty of this, I suppose. At least neither the customers nor the service staff at Esselworld displayed the aggressive, boorish attitude that is a hallmark of most multiplexes. Our troubles ended right at this point and all the effort was well worth it for the day we had.

In retrospect, it would have been better to take a walk around the entire park before getting in line for any of the rides. We started with Zyclone, the first roller-coaster that’s just a few feet after the entrance. Zyclone is a single car ride with 4 passengers so the line moves really slowly. We spent nearly an hour waiting and the ride was over in under a minute. Still, this is a good basic ride, with enough rush to get an adrenalin junkie started but moderate enough to appeal to people with milder tastes.

We wisened up from our long wait at Zyclone and decided to avail of the maps handily posted every few feet of the park. Our next stop was Hoola Loop, another roller-coaster, this time a 3-car one carrying 12 people per ride. Hoola Loop also boasts dips twice the lengths of Zyclone and a full 360-degree turn on the turn. We had to wait for this ride too but the line moved faster as twelve people went in on each round. I kept my eyes firmly shut on the first dip but plucking up courage from my unfazed companions, I kept them wide open and saw the ground shift beneath me on the upside-down loop the loop turn. It happened so fast that it left me with a mild headrush and that yay! feeling that comes from having faced down a longtime fear successfully. Hoola Loop is a more extreme ride so you can skip Zyclone and move right onto this for a headier rush.

We’d had our fill of roller-coasters so we moved onto an octopus-like ride called Monster. I seem to remember this ride as having maroon-coloured cars. The cars are vaguely heart shaped so that memory can’t be too off (blood and all that). But the cars are now a vivid green-and-yellow and dangle, 4 to an end of a tentacle. There are 6 such tentacles and 2 people can be seated in each car, making it a total of 48 people on each round. The base turns around, spinning the tentacles. Each car also rotates in a smaller circle, thus simulating the earth’s rotation-and-revolution movement. None of us were expecting too much, after our back-to-back roller coaster rides. So we were a little shaken by the slight queasiness that this ride left us with. I think this may have something to do with the speed as well as the slight angle that each car is on. I wouldn’t call this an extreme ride, but if you’ve been on a couple of others, this is definitely not the one you want to relax with.

Spurred on by having been on these rides, we pressed forward onto the mysteriously named Enterprise. This one starts like a merry-go-round. Once it picks up momentum though, a gigantic arm lifts the merry-go-round off the ground into a fully vertical state and now it’s a giant wheel. What’s scary is that the cars are individual cages that hang off the edge of the wheel and so turn over with the movements. You’re actually spinning upside-down when it reaches the giant wheel state. You’re also alone in a cage, unable to cling to your partner or scream to them. What a pleasant surprise it was then, that the ride turned out to be different, quite different from our fears! The cages contain no safety belts and once I was in the ride, I realised why they didn’t need them. Centrifugal force keeps you pinned to your seat and if you’ve anchored your feet well, you stay secure and comfortable. The lift-off that look sudden from the ground, felt smooth and comfortable while actually on the ride. It was a curious sensation, almost like flying. While I wouldn’t rate this one high on the fear factor, it was my favorite ride of the day. Enterprise proves my premise that it’s possible to get a thrill without getting a chill.

I’d been dying to get onto Rock n’Roll, mostly because I was intrigued by its bright colours. It also look relatively safe, since there was no lifting off or spinning. Rock n’Roll consists of a series of round boxes, 2 seats to one, fitted in a circle around the base. The base revolves, of course. Each round box also spins in a clockwise manner. That’s the misleading bit. Since you don’t see people flying into air or even catch their fear-torn faces as they get tossed about, you completely discount the fact that you’re going to be hanging upside down and hurtling about in forced cartwheels. Unlike Enterprise, where you’re moving with the motion or above it, Rock n’ Roll throws you against the motion and straps you in your seat to keep you safe. It’s not a comfortable feeling at all. Add to that, I got strapped in too tight, despite my protests. The burly female guard just wouldn’t listen and just barked out a ‘Loose karenge to baad mein aur loose ho jayega!’ at me. All this was compounded by the fact that the ride at 3.5 minutes is longer than any of the others. I spent most of that time, with my eyes screwed shut, forcing breaths from between the strap & the seat, dragging my foot back in as it kept swinging out of the car and trying to keep my hold on the wheel in front of me. When I got down, I felt like my brain had come loose of my skull and I had a headache for the better part of the evening. If you have a sensitive inner ear, respiratory disorders or bony hips, you’re better off not experiencing Rock n’Roll.

After this, you might be surprised to note that I managed to actually get onto another ride. Thunder was next in line and looked like the scariest one to boot. This ride consists of two platforms of seats, fitted at the ends of long arms, which in turn are fitted to a vertical stand. The two arms swing out like pendulums, in opposite directions. You’re seated inside the cage at the end of an arm and the effect is like being on a giant swing. Higher and higher you go with that stomach sinking feeling on your downward journey. All of a sudden, you’ve gone just a tad too high and the pendulum arm has stopped and you realise that you’re hanging upside-down in mid-air. Then tortuously, the arm turns and you’re descending again but your upward journey takes you back to that point of crazy upside-downness. The next round, you think you’re prepared to hang and return. But this time, the pendulum continues its journey and you’ve just made a full circle around! Thunder got rated ‘the ride of the evening!’ by my friends. It was scary to just the right extent and thrilling in equal measure. Also, we were all tickled beyond tolerance but none of us felt queasy at the end of it. This of course, varies from person to person since our ride was delayed in order to clean up someone’s puke from the earlier ride.

It was almost 7pm by this time and we had barely an hour to go. The crowds had thinned out a bit too so we just rushed around. We managed to get in a go on Aeroswinger, which is just a nice, safe merry-go-round with cane chairs at the end of ropes. My friend climbed an almost hidden wall in under a minute at Riki’s Rocking Alley. The boy batted a perfect score in Cricket Zone. We walked around in the intriguingly titled Prabal – The Killer (a model ship/submarine). All three of my friends took a turn on the buckin’ bronco bull, ending up on their backs, each fall funnier than the previous.

And we finally ended with Aqua Dive, a simple enough roller-coaster with just one dive, into a pool of water. My last experiences told me that we’d only have a few drops of water on our sleeves. But on the actual ride, we hit down with a massive splash. And then the car just stopped. We all looked up and as my friend put it,

There was this gigantic cloud-thingy up in the air and it was coming at us!!

We were soaked so thoroughly, a straight dive into the pool would have been slower. This at 8pm on a January evening, when we were at least 2 hours from home! Freezing and giggling, we managed to wring out the worst of it, trudge through the lines (again!) out of Esselworld and onto the ferry. The autorickshaw ride back cost us Rs.80 and none of us were in a position to reason why. This is the kind of day that leaves you wrung dry of energy and filled with satisfaction in a way that work-till-you-drop doesn’t.

My expense tally for the day:

That’s a whole day’s entertainment, food & travel for under Rs.1200 a head. Considering the sheer satisfaction & fun I had, it was totally worth it.

One thought on “Esselworld – Extreme Central!”