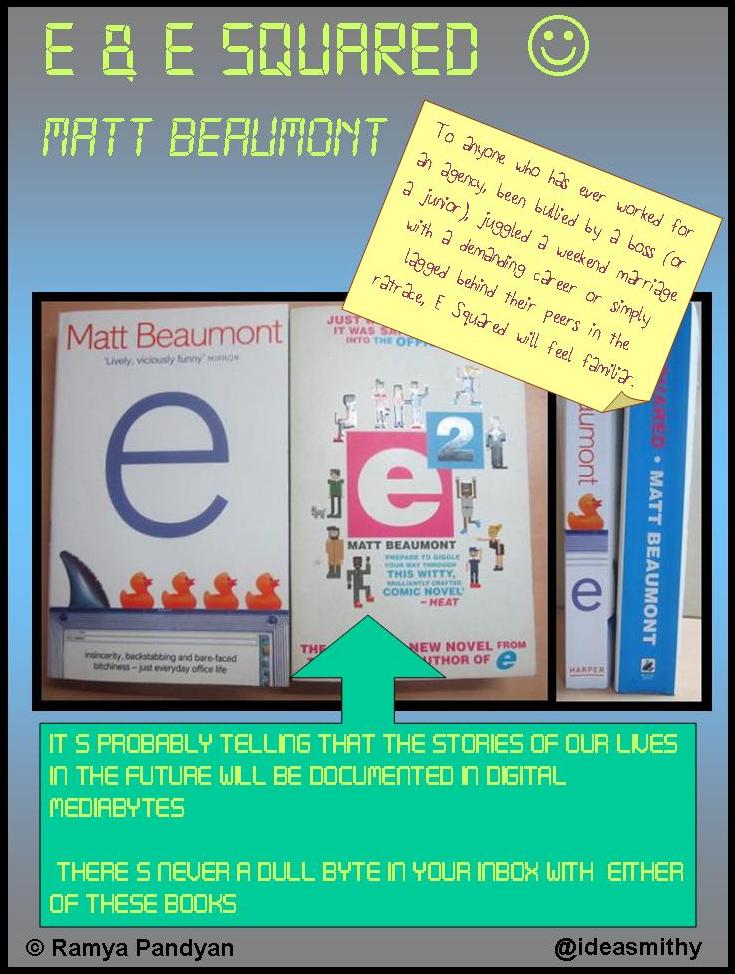 A good friend gifted me ‘E Squared‘, a novel about a cutting-edge/crazy-ass advertising agency, entirely told in the form of electronic communication (blogposts, emails, chats and SMSes). I loved that book so much that I couldn’t wait to read the original that sparked off the idea.

E, even better (aren’t the originals always?) is only in the form of emails since it’s set in 2000 before the advent and popularity of some of the other forms of electronic communication. E Squared was spread across a year whereas E deals with solely the first eighteen days of 2000. Admittedly the plot stays a little closer to realistic, with very minor diversions from it for humor value (an employee who is a doppelganger of a TV celebrity sharing a beach with her, hire-and-fire-and-rehire-on-whim practices) and most of the funnies come from extremely believable, if somewhat grisly situations (idea theft from students, leaked sex tapes, assault charges) looked at in a witty manner. In comparison, E Squared really pushes the envelope with bizarre twists (teenagers running away to foreign countries, Nigerian spammer heiresses). And with all these differences, both books were absolutely delightful.

The email/electronic communication only format worked perfectly and never lost the wry wit to confusion or blandness. I’d recommend both books for anybody desperately needing a good laugh about the burdens of the working world. Here’s my Goodreads reviews of E and E Squared.

Miller Shanks is a fictitious advertising agency whose London arm is depicted as they enter the turn of the millenium. In the first 18 days of 2000, which spans the length of the entire book, the Miller Shanks team deals with embezzled ideas, international diplomatic incidents, a sexual assault case, wrestling secretaries, broken doors, fake suicide attempts and a sex tape. It’s brilliant and funny.

E is a frothy, light look at advertising and modern office life. It also happens to be a novel written entirely in the form of emails. No conversations, no descriptions, no scene-setting; everything from characterisation to dramatic build-up and other plot elements occurs in the timing, from/to people and tone of inter-office emails. Surprisingly, this never gets in the way. It’s really easy to keep the situations and people straight, even with the lack of background information.

This might be because Beaumont puts his finger on the nub with every character he creates – all rib-tickling archetypes of people that everyone experiences in any office in the world. We meet the tyrant boss, the politicking middle manager, the bitchy secretary/receptionist, the distant God-type owner/President, the puritanical/randy client, of course. But there’s also the agenda-pushing headhunter, the utterly-devoid-of-social-skills-but-very-efficient accountant and the much-hated/long-suffering IT department. There are also all the familiar social set-ups of lunchtime buddies, inter-department grapevine and cubicle romances.

There’s never a dull email in the inbox. I loved the book!

e Squared by Matt Beaumont
My rating: 4 of 5 stars

Bitching about the boss, trying to hook up with the office hottie, watercooler gossip, mad clients, madder colleagues and the maddest workplace of them all – E Squared pulls you into the surreal corporate soap opera of life at ad agency Meerkat360.

The entire novel is in the form of blogposts, chats, text messages and emails. Surprisingly, the novel format doesn’t hurt the reader at all and within minutes you are drawn into the lives of the Meerkat360 staff (and some others). Anyone who has ever worked for an agency, been bullied by a boss (or a junior), juggled a weekend marriage with a demanding career or simply lagged behind their peers in the ratrace, E Squared will feel familiar.

It’s probably telling that the stories of our lives, in the future will be documented in digital mediabytes. It’s a regular Dilbert meets 2 and a 1/2 Men.