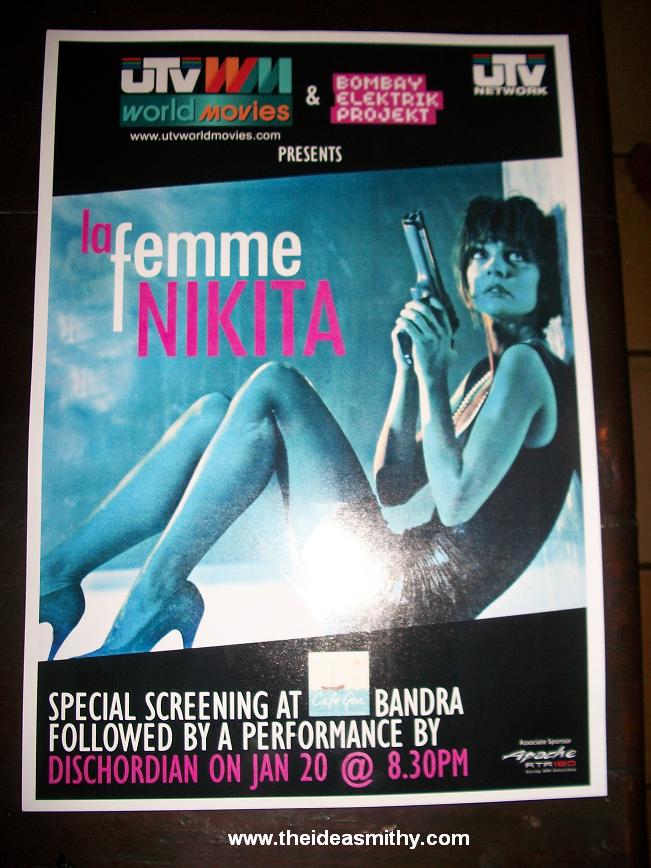 I was at Café Goa this Wednesday (20th January) for the UTV World Movies & Music event organized by the Bombay Elektrik Projekt. As it was, the trek to Bandra is a formidable thought (and I stop short of saying ‘unrealistic’ since that’s what’s I call travelling to town). In typical Mumbaiker fashion, I aim for efficient usage of time so I clubbed this with another event – meeting a longtime friend/reader of my blog. We decided to skip the movie in favor of coffee & chat and come back for the music performance.

The opening act was by Gillian Grassie, a harpist from Philadelphia on a year-long tour of several countries including India to study the relationships between new technologies and independent music scenes around the globe. I managed to catch only the last few minutes of her act and what little I saw was quite mesmerizing. The harp carries associations of white-clad angels and an otherworldy, semi-religious feel of music. Gillian’s music was none of those things but managed to bring a sweet freshness to instantly hummable tunes. Her fingers seemed to be feather-touching, almost dancing on the strings of the harp (which was almost as big as her..and here I thought the harp would be a much smaller instrument). The harp provided only a very soft background to the songs which primarily rode on her voice. It’s quite impressive to create a song purely from one’s voice, virtually unassisted by the grandeur of an orchestra and Gillian pulled it off, holding the audience spellbound. I do wish I had made it to the venue earlier to catch her entire performance.

The headlining act of the evening was Dischordian, a venture by Garreth D’mello (also of Split). Dischordian is described as ‘an attempt to move away from the wall of sound and aggression and testosterone that makes up most rock music, an attempt to strip music down to its basics’.

Garreth was accompanied by Howard Pereira on his guitar and Agnnelo Picardo (Aggie), the percussionist/trumpeteer. The last began the evening, hugging a trumpet close to his chest while listening to Garreth and Howard spark up the show. I’ve never seen a trumpet that close. The advantage of a place like Café Goa is the proximity it provides between the performer and the audience. So I kept my eyes trained on the trumpet, an instrument I only have vague associations with, of loudness and some sort of stiff-necked wedding band. Thus it came as a pleasant surprise when the trumpet actually made its entry into the music at ‘The Old Whore’. Aggie led it in with the kind of regal dignity and grandeur that you would associate with a quiet, well-built black man who surprises you with jazz. Yes, jazz was unmistakably what I heard in Dischoridian’s sound everytime the trumpet was a part of it.

Garreth himself has tremendous presence on stage. His face is boyish and manner as laidback and easygoing as his Goan roots. But when he begins to sing, those notions melt away as you are carried off in the power and forceful magnetism of his rich voice. It’s a deep voice, the kind that sounds mature and all-knowing with wisdom that comes from having experienced excitement and grown past it. Possibly because of the selection of songs and the jazz feel that I described earlier, it also felt like a strong but gently caress, the sort that can crush but knows how not to.

I’ve heard ‘The Old Whore’ before, live as well as a recording. It has a classic country-western feel to it. Some artists sound much better in person than on the polished finish of a recording and Dischordian is certainly in this category.

‘Scourge of Love‘ revved up the tempo and suddenly the audience was drawn into the performance, before we even knew it, thumping our feet and trying to sing along (or hum along at least). This is when Swati who had accompanied me clapped her hands and called Garreth, India’s answer to Kurt Cobain (which elicited a weak smile from Garreth when I told him later, followed by a hasty retreat).

The piece de resistance of Dischordian‘s performance has to have been ‘Bucket of Blood’ (I actually thought that was ‘Bucket of Love’ when I tweeted about it);-). It’s a racy, foot-thumping number, all adrenalin and blood-rushes. I’ve not seen Garreth in his former avatar but several people I know have given me a pretty graphic account of his rockstar days as a tee-shirt ripping stage-stud, girls screaming et al. His shirt stayed firmly on and he remained seated but this song was a more than adequate hint to those days. And yes, there were a lot of people screaming, even in that tiny room in the café, men and women alike.

The trumpet was replaced by a sort of bongo (hand-drum?) for the same song and served to showcase Aggie’s talent. All artists are trying to communicate something in their own ways and media. Musicians face that challenge by appealing to something whose response can’t often be quantified in words – melody, beat, the combination of the various sounds made by wind and strings and voice. Some instruments like the guitar and indeed, the human voice make that connection a lot more easily but it is a greater challenge to connect with the audience with the more distant (but grand) percussion. Aggie displays as much presence as Garreth does, in a different way. As the lead guitarist and vocalist, albeit with his own brand of showmanship, Garreth is the flash-and-dazzle of Dischordian but Aggie makes his presence felt subtly and yet, noticeably. It’s an impressive talent and makes for a great performance.

Garreth performed solo on ‘One of these days‘ and ‘How I wait”,  which while melodious, didn’t quite send me into rapture like the earlier songs. They could just be the kind of songs you’d prefer to listen to within the intimacy of headphones and in solitude rather than with a big group of people. Fortunately Howard and Aggie returned to perform ‘She lied to me’ and a cover version of Jello Biafra’s ‘Are you drinking with me, Jesus?‘ which really had the crowd howling in appreciation. The other songs they performed were ‘Same old conversations‘, ‘Your Right Heel‘ and ‘Baby, Maybe’.

The performance closed a few minutes after midnight.

The neighbors are complaining. You wouldn’t think an acoustic band could make much noise. But apparently we can.

was Garreth’s wry observation as the audience begged him for an encore.

In sum, the evening was well-spent and totally worth the trip to Bandra. The second half was good but I think the first few songs took away the show. Dischordian is great, live in action and I’ll gladly make the trek again to hear them. I would also like to hear their recorded songs to be able to compare it to their live performance. But my feeling is their real talent lies in the tangible connection they are able to make with their audience when they are right in front of them.