Coup in the ladies’ coupe 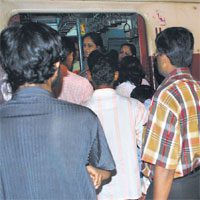 One little corner in the newspaper tells of a tussle between women commuters and the Mumbai railway authorities. Apparently as a part of a new range of services on Mumbai’s Harbour line, the earlier timetable has been altered. The hitherto 9:14 a.m. Vashi-CST local was advanced by one minute. Not as big a deal…what’s in a minute? (Pah, ask a regular train commuter but we won’t get into that now). The big deal was that three rear compartments that were earlier reserved for women were scrapped.

The unforeseen response to this change was that the women commuters rallied together in protest. First they complained to the Central Railway authorities and then, receiving no response, acted in the most effective way possible. They just wouldn’t let the men get into the compartment.

In response, the Central Railway sources said that:

The special compartments for ladies have not been scrapped, but have been allotted to the 8.16 am Panvel-CST local. This train reaches Vashi at 8.47 am, but women commuters may not be aware of it. The complaints of women commuters are under consideration.

A quick reminder to the Central Railway that this is not the same thing since the train gets in a full half-hour earlier. The dynamics of crowding, peak hours, office schedules are completely different on this side of 9 a.m.

I’m quite happy to report that today’s news says that Central Railway has given into the request to retain the ladies compartment on the now 9:13 am Vashi-CST local. The article also adds that the men are not very happy with the decision. Understandably so. I know the trains are probably the most crowded, grueling experience of everyday survival that a Mumbaiker faces. Every inch of extra space is precious.

On the other hand consider this. A regular train has three compartments for women – 2 second-class and 1 first-class. That’s only on the Western line while the Central and Harbour both have half a compartment each to the first-class. And these in a train that has 9 or 12 coaches. No woman in her sane mind would get into the general compartment, during peak hours even though it is available to commuters of both sexes. So the entire female commuter population is crammed into those 3 compartments.

I need mention here that it is a common male misconception that women travel in complete luxury in the ladies’ compartment, ‘especially in first class’. We do not. And I know this because I’ve traveled in the general (commonly misunderstood as the ‘gents compartment’) and the ladies compartments (first and second class) at all hours of the day. Men haven’t traveled in the ladies’ compartment. If they had, they might have found reason to revise their opinion. I can tell you stories of vicious fights breaking out mid-journey. It mayn’t seem like much but sandal heels, umbrella points, the catches on purses all becomes weapons of warfare in this struggle for space. Not that we have much choice. The average woman commuter would much rather face these than be brushed up against 50-odd strange men in the general compartment.

Everyday that I travel in the train reminds me of how much more ferocious women can be when it comes to getting what they want. And contrary to popular perception, the first-class is actually the worst of the lot (with Western line bringing up the gruesome lead). Manicured fingers clutching sleek mobile phones turn into claws when they’re inside a railway bogey. Attitudinally this set is by far, the bitchiest, most venomous of all travelers I’ve seen. If I had to lay a bet on which section of Mumbai’s travelers would be most likely to push their fellows off a moving train and also the least likely to help someone in need, it would be the first-class ladies’ compartment travelers on the Western line. Far from luxurious, we travel in crowds and hostile ones at that. Once again, I know I’m right because I travel by all three train lines. And so I think that while everyone in this city could use some extra space, our need is greater.

I am deeply injured by the fact that the ladies compartment on every train on every line is placed right in front of the stinky toilets. Obviously someone has to be positioned there but I just wonder why the only place allotted to us has to be put right there. I mean, we don’t even have the choice of another dabba. What’s worse, these are invariably at the ends of the carriages so miss getting into one and you’ve missed the train. So stay equipped for a long trek to the other end of the platform or to the staircase. The Railway network is hardly women-friendly so enough with the accusations of being pampered, already.

May I also add that I’m thoroughly impressed by the effort on the part of the ladies who spoke up for what they needed and got it? I am not going to get into the justification of why and how women become like this (That’s for my other blog, not this one 🙂 ). I am after all one of them as well, being a regular on the trains. Let’s just say that life isn’t hunky-dory in our red or green-striped part of the train world either.

5 thoughts on “Coup in the ladies’ coupe”