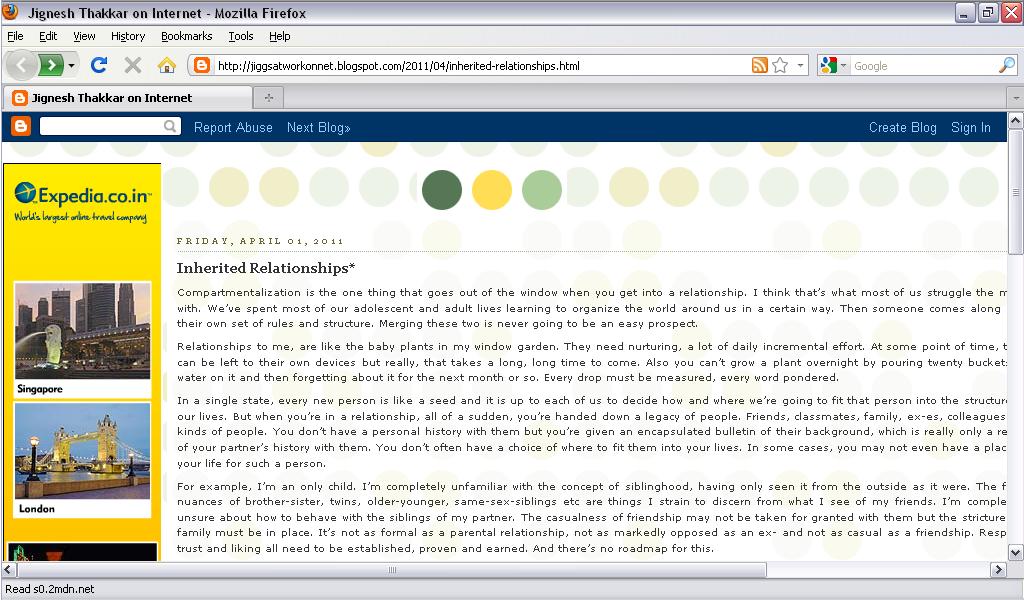 And here’s Jignesh Thakkar doing a repeat of that post on 1 April 2011.

Note now that the post ends with (in tiny lettering which is the online version of fine print),

Now here are some things to think about:

The comment I left on Friday has seen no response. I emailed Jignesh Thakkar at the address on his profile but I’ve received no reply there either. So today, I’ve been tweeting about it.

I’ve experienced copycats before, both in the offline and the online world. Online is where it struck me as most stupid, considering how easy it is to track down the original. Oddly enough, each of those times, I was advised to not make a big deal of it, to drop it and even to take it as a compliment since someone wanted to copy my material.

I don’t understand this. Would you be honoured that someone saw fit to steal from you? Would you take it as a compliment if someone came and kidnapped your child? My writing is my creation and hence no less important to me than a child would be to a parent.

So yes, I am choosing to take a stand on this. Stealing my blogpost is not permissible. If you agree with me, leave a comment here, at Jignesh Thakkar’s (copycat) blogpost, tweet about it, RT my tweet, blog about it or add your voice in whatever way you see fit.

Here are some of the people who already have:

Update: I tweeted about Jignesh Thakkar’s copied post. It got RTed, a number of people shared their experiences with content theft. Also a couple of people (some friends) thought I was making a big deal out of nothing and that such things were ‘commonplace’ online.

Update 2: Following the advice of two friends in the know, I notified Google (since Jignesh Thakkar’s blog is hosted on Google’s Blogspot). I did this by using the ‘Report Abuse’ menu in the topbar. Google sent back a notification of my complaint being registered.

Update 3: Exactly a day later, I received a notification from Google that the copied post was no longer on Jignesh Thakkar’s blog. They must have found a way to get in touch with him too (which I wasn’t able to) since I received a reply to my email. He also put up the following posts (1, 2) apologizing for the post he took from my blog and also announcing that he was reviewing his blog to clear it of any such cases.

SXonomics in DNA AfterHours: ‘ These Bands Are Giving Out A Strong Message In Music/’