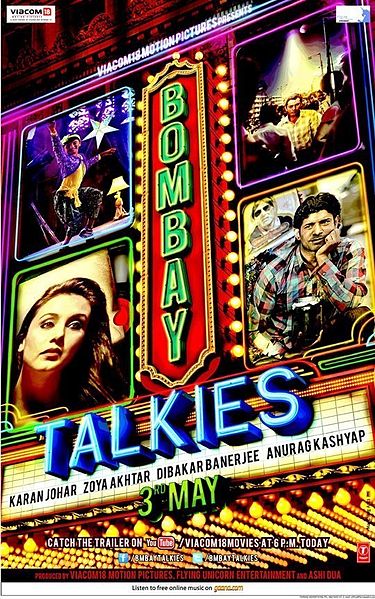 If you’re a cricket-agnostic in India, then IPL season is slow torture. Every television in the world is hogged by cricket fanatics. Restaurants, malls, even shops are playing matches and everybody’s looking over your head to catch the score. Even the bloody internet bandwidth is clogged by those in office, desperate to know Sachin’s stats. And if you do manage to get online, Twitter is waiting for you, hashtags bared. A movie would be a nice place to lose oneself from this mania but the multiplexes and theatres all throw up their collective hands and screen the bottom-of-barrel movies only. I guess somebody up there took pity on the minority that is me and tossed me a tasty titbit in the form of Bombay Talkies.

Released as a centennial tribute to the 100 years of cinema, Bombay Talkies is

a collection of four short films, one each by a prominent Bollywood director. The shorts-format has always intrigued me and I wonder why Bollywood doesn’t do more of these. The only short film collections I’ve seen Bollywood release into mainstream are Darna Mana Hain, Darna Zaroori Hain and Dus Kahaniyan. Considering the burgeoning costs and risks in making a film, might it not be a better idea businesswise and creatively speaking, to spread that across multiple smaller buckets? I do hope the powers-that-be are considering this and that the brilliance of Bombay Talkies paves the way for more.

The first story, directed by Karan Johar, brings the expected star value by way of Rani Mukherjee and Randeep Hooda. This film is really more about gay angst than about cinema. It’s not too bad, all things considered. Unfortunately, as part of a bouquet that has the other offerings, this one is the weakest, both in terms of interpretation of the theme and the story delivery. Randeep Hooda is his versatile self but Rani (doing a Vidya Balan a la The Dirty Picture, if Silk were an affluent South Bombayite) come through the way HD made the raving beauties of the last decade look – plastic and grotesque. The one and only sweet note in this film – and it’s a beauty at that – is the street urchin’s rendition of Ajeeb daastan hain yeh. The child’s voice brings all the mood and has that component of art that reaches out from its canvas/celluloid/paper and wrings the audience’s heart.

Story two, by Dibakar Banerjee, takes us through the mundane day of a chawl-dweller and the one special event of his day. Nawazuddin Siddiqui is nothing short of superlative in his depiction of a nondescript everyday man turned magician, full of wonder and glory and big dreams, if only in his own mind. This one showed real class in such subtleties as Purandhar’s monologue with his alter ego and a surreal emu walking around in disparate scenes.

Post interval, the film didn’t disappoint either. The next story, by Zoya Akhtar dips into the LGBT bucket again, but this time with finer strokes and the rawer talent of a child. A little boy dreams of shiny baubles and dancing, instead of football and cricket. Mostly alone in a world of ambitious and gender-role rigid parents, he takes comfort and inspiration from Katrina Kaif. The climax of this film made me want to stand up and clap and just keep on clapping. Naman Jain shows talent beyond his years as he manages to depict a cross-dressing child without parody. He makes you want to laugh with him, rush to protect him from judgements that will destroy his innocence and applaud him for the star he is. This was my favorite film in the entire movie.

The last story is by Anurag Kashyap and to my surprise, not dark or gritty. It’s a fairly standard story of the God-level idolization of filmstars across India. A young man comes to Mumbai with just one burning purpose – to meet Amitabh Bachchan and ask him to bite into his mother’s homemade murabba so his ailing father can eat the other half, having felt like he shared a meal with the superstar. But the story carries you through Vijay (Vineet Kumar Singh)’s adventures and right through the twist in the end. Maybe I’d have enjoyed this film more if it had been number two or three. Placed last, it felt slightly predictable, probably because the two preceding it were so unexpected and diverse. At the start, I also had a The Terminal flashback with Tom Hanks soldiering on to get an autograph of his father’s favorite jazz player. Still, this was a very good film with the unmistakably Kashyap style of extreme highs and lows.

The movie ends with a song that fails to impress in any way. The medley through the years has been done so often in Bollywood recently, you already know how the music and even the backup dancers hips will swing. And it closes in a tacky family-photograph style ensemble of all the current actors. I was glad to walk out by this time.

In all, I’d have thought this would be a ‘festival’ kind of film, meant only for niche audiences that lived and breathed the technical language of cinema. What I found instead was a damn fine movie, that even I, a regular member of the audience, could relate to and enjoy.